A singer who offers hope 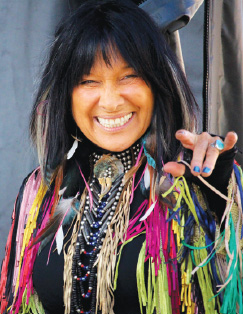 Beverly “Buffy” Sainte Marie was born on Feb. 20, 1941 (or maybe 1942), on the Piapot 75 reserve in the Qu’Appelle Valley, Saskatchewan, Canada. She was orphaned as an infant when both of her parents died. She was adopted by Albert and Winifred Sainte-Marie of Wakefield, Mass. The couple were of Mi’kmaq descent, but her upbringing was completely white. She grew up in the wilds of Maine loving the woods and music, both were her escape. She began to play piano at the age of three, teaching herself, and guitar shortly after that.

She relates that her childhood was abusive in many ways. “It had been going on for generations where native children were removed from the home,” Sainte-Marie says. “What happens to children who are kind of lost in the system like that, they’re assigned a birthday, they’re assigned kind of a biography. So in many cases, adopted people don’t really know what the true story is.” Hence the confusion around her actual birth date.

By the time she was in high school, she was playing in clubs, using her own unconventional tunings. She had no intention of making a career in music but an appearance at an open mike night at Greenwich Village’s Gaslight Cafe brought her to the attention of critics and record companies. By the end of 1963, she had given up her plans to become a teacher and was being hailed as one of the most promising talents on the New York folk scene. Another Indian folk singer, Patrick Sky, taught her to play the traditional Native American instrument the mouth bow, which became a distinctive part of her sound, along with her unique guitar style and her sometimes strident, sometimes delicate vibrato-rich voice. She moved from the coffeehouse scene to appearing at Carnegie Hall, in also in New York, in 1965.

She did attend the University of Massachusetts in Amherst, earning degrees in teaching and Oriental philosophy. While she did not enjoy her early school life, she graduated from the University of Massachusetts in the top ten of her class. Her career in music had taken off but through the Cradleboard Teaching Project, she did manage to teach and continues to do so today.

Shortly after Sainte-Marie began singing professionally, she came down with pneumonia. Unwilling to give up performing, she took codeine to ease her symptoms. The illness persisted for six months, and she became addicted to the drug, recovering only after a painful withdrawal; she also came close to ruining her voice. She wrote of her addiction in the song “Cod’ine.” She appeared on Pete Seeger’s Rainbow Quest in 1965 and in several Canadian Television productions from the ’60s to the ’90s. American broadcasts included American Bandstand, Soul Train, the Johnny Cash Show, the Tonight Show with Johnny Carson. She sang the opening song, “The Circle Game” (written by Joni Mitchell) the film The Strawberry Statement in 1970. She appeared in Then Came Bronson and Mating Dance for Tender Grass. She and her son Dakota, were regulars on Sesame Street for over five years. She appeared on Democracy Now in 2015. She was blacklisted during the 70’s.

Her authorized biographer, Andrea Warner, says: “Buffy has sort of mapped a lot of her life experiences through her songs. She’s given us an incredible map for hope.”

I highly recommend Buffy Sainte-Marie: The Authorized Biography by Andrea Warner, 2018. Also, if you don’t know her music… LISTEN!

There is also a really good documentary on YouTube, Buffy Sainte-Marie A Multimedia Life The Documentary

Check out her discography, I am sure you will be amazed at the songs she has written that were covered by other artists. I was!