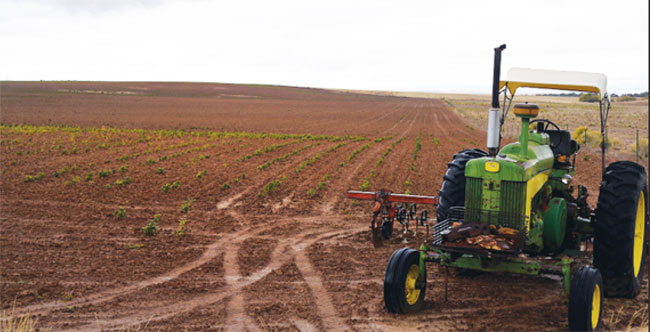 A tractor with cultivators sits in a Dove Creek beanfield, where it was last parked — before drought destroyed most dryland crops across the region. Photo by Ole Bye.

“Beans don’t ask for much,” muses Denise Pribble, in between selling small souvenir bags of pinto beans to the occasional curious tourist. She owns Adobe Milling, one of three bean elevator companies in Dove Creek.

The town bills itself as the “Pinto Bean Capital of the World,” but the proclamation doesn’t attract many tourists – farming is still the primary economic driver here. In a typical year, Pribble will take in 3 million pounds of pinto beans grown without irrigation water – dryland beans.

This summer, despite their admirable thrift, the bean plants withered in bone dry conditions. Southwest Colorado’s entire 2018 dryland bean crop failed, along with almost all of its wheat, sunflower, and safflower.

“They just sat there and sat there and stunted,” says Pribble of the beans. Farmers, as they look to crop-insurance payments to recoup some of their lost income, are reeling as the worst drought in 120 years forces hard choices on an already precarious agricultural regime.

Between Cortez, Colo., and Monticello, Utah, stretches the vast Great Sage Plain, a wind-swept plateau sloping gently south to the edge of the broken canyon country along the San Juan River. Hundreds of Ancestral Puebloan archaeological sites scattered across the area give evidence of previous largescale dryland-corn cultivation enduring until about 1280 A.D.

Over the last hundred years, enterprising American farmers again cleared the sagebrush, piñon, and juniper from the flats, and have banked on a typically steady cycle of winter snows and late-summer “monsoon” rains to infiltrate the deep red soil. With skillful cultivation and careful timing, they have brought dryland crops to maturity, year after year, on the edge of a desert.

It has not always worked. Drought hit in 1950, 1956, 1966, and 2002. Other years saw yield problems, too. But nothing has been as severe as 2018. For over a year, the precipitation record has foretold catastrophe for dryland farmers.

Dolores County has been in category D4, “exceptional” drought – the worst classification – since April. The USGS water year (Oct. 1 through Sept. 30) brought just over five inches of precipitation, down from a typical 10 to 14.

From August 2017 through September 2018, precipitation did not once break the historical mean of 2 inches per month. All fall, the U.S. Drought Monitor map has shown a large crimson blister centered over Southwest Colorado – the largest and worst concentration of drought-stricken counties in the country.

Often as important as the quantity of precipitation is the timing sequence of snow and rain. The problems started in August 2017 when it stopped raining – the soil dried out and many farmers didn’t plant winter wheat.

Next, a warm and dry winter brought scant snow moisture to germinate and sustain 2018 spring-planted crops like spring wheat and beans. A weak monsoon season came and went in July and early August, but by then it was already too late to revive the desiccated plants. Farmers started to disc or “work in” the failed bean crop, and later harvested a miniscule 10 percent wheat crop. Then, in early October, it rained enough to plant a winter wheat crop for 2019. But not enough to get Dolores County out of D4 drought, where it remains.

Rain lifts spirits in dryland country, but it won’t wash away the memories – nor the consequences – of the 2018 drought. The damage is weighing on everyone, and oral reports corroborate the catastrophic precipitation record and its impacts.

Rod Tanner, who owns Midland Bean Company, received no dryland bean crop this year: “Sixty percent of bean growers didn’t even plant. We’ve been here a hell of a long time but I’ve never seen it this bad.”

Bruce Riddell, general manager at High Country Elevators, agreed. “I’ve been doing this since 1980. It’s definitely the worst in 38 years.” 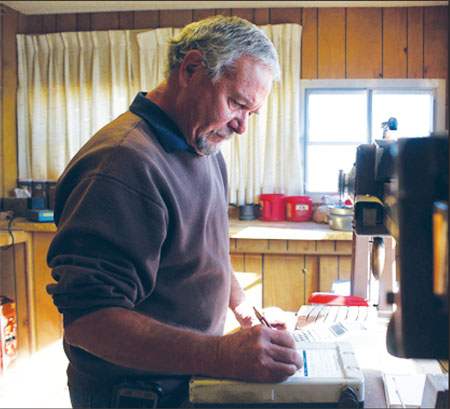 After weighing a truck on the antique Spinks truck scale at High Country Elevators in Dove Creek, General Manager Bruce Riddell fills out a receipt for farmer Steve Garchar’s load of hard red winter wheat seed. Garchar hopes it will sprout before winter.

But even irrigated producers saw production fall to about 50 percent of normal as water shortages and harsh conditions took their toll. Most had to “water up” their crops after spring planting, instead of getting a boost from snow moisture. Some reduced irrigated acreage to consolidate what water they had.

Ranchers have been hit hard, too, and many are reducing their herds by 75 percent in the face of barren pastures and hay costs that have doubled.

“I have a lot of family, old-timers. I always ask every one of them have they seen anything like this, and the answer is no, not this bad,” relates Travis Herrmann, who runs cattle on dryland pasture in Dolores County. “Say 120 cows on 160 acres should last four months, this year it’s a month. We’re getting zero grow-back this season.”

With so many losses, the safety net of federally subsidized crop insurance is kicking into full swing. “With the exception of one farmer, every farmer and landlord filed a claim this year,” says Ken Brengle, an insurance agent in Cortez who processes Risk Management Administration claims. “It was not a profitable year for crop insurance,” he admits.

This safety net is flawed, though – most farmers don’t recoup nearly what they would with a good harvest. One factor is that average yields have gone down in recent years, pushing down the “guarantee” or “proven yield” that the insurance industry uses as a baseline comparison. The paid difference between the actual yield and guarantee gets squeezed as the proven yield gets farther from historical norms.

“One [drought] year isn’t too bad,” explains Brengle, “but multiple years can really hurt their guarantee. If you have too many low-yield years it hurts your guarantee, and your premium actually goes up. The worse the average yield is, typically the higher the premium is.”

The domino effect of drought shakes farm businesses to the core. A small insurance payment and a fractional harvest (that costs as much as a good harvest) don’t combine to offset lost income and expenses that climb every year.

“The safety net of crop insurance pays nothing by the time your proven [wheat] yield gets knocked down 10 bushels,” says dryland farmer Eric Guynes.

At High Country Elevators, Riddell has seen drought impact farmers before. “They always seem to make it, but this year I’m not so sure.”

Dolores County, population 2,000, encompasses a sizeable rectangle of the Great Sage Plain. It is home to 75,000 acres of dryland farms, representing 90 percent of its agricultural land base. Farming is key to the region’s economy, and in Dolores County, it is the largest sector, accounting for 30 percent of economic activity. Dove Creek retail businesses serve primarily farmers and those who work in farming. Without a diversified economy, the county has no appreciable buffer between drought and disaster, and the severity of this year’s drought is testing the limits of local resiliency.

“I’m losing money hand over fist and I can’t stop the bleeding,” he says.

“You can already see the impacts blowing through the communities,” says Gus Westerman, Dolores County Extension director. “We are one of the few ag-based economies left on the Western Slope. The drought… just ripples throughout the economy.”

Even in a good year, dryland farming is intimidating. The sun withers and the winds desiccate. Old equipment breaks. Bodies wear out. Commodity prices fluctuate at the whim of international markets. The price of diesel creeps up.

Furthermore, ordinary dryland yields run from one-sixth to one-12th that of irrigated ground, and to compensate, farmers take on vast tracts, creating a scheduling nightmare for critical planting and harvest windows.

“We’ve taken on so much ground because the profit margin is so low,” explains farmer Matt Forst. “There’s a balance point, but you almost topple over.”

His colleague Eric Guynes corroborates, perhaps evoking more than just acreage: “We farm more than we want to in order to make a living.”

In dryland farming, anticipating and evaluating climatic changes is paramount, and in addition to sophisticated meteorology resources and devoted Extension personnel, farmers rely on their well-honed expertise to provide critical guidance in decision-making. A seasoned dryland farmer like Mike Coffey can sift through topsoil with his fingers and make the risky determination of whether a 160-acre field is wet enough to plant – and germinate wheat.

Harrison Topp, the membership field representative for the Rocky Mountain Farmers Union, shares what he sees across the region. “Over half the ag regions in western Colorado are water- short. We’re losing track of what a normal year is.”

In Dove Creek, people often cite winters trending warmer over the last few decades. Riddell affirms this perception: “When I first moved here in 1980, they talked about snow being up to the third wire on the fences, but it gets less and less every year.”

It seems evident that the hundred-year-old paradigms for producing food in this climate are no longer reliable, and farmers are struggling to stay ahead of the changes.

As for the future of dryland farming, no one is recklessly optimistic. Alternative farming practices don’t always translate here, and farmers may not be able to afford the necessary new equipment.

“It’s really hard to just take a new practice and implement it. We’re a unique little pocket,” says Westerman. For example, he says, no-till (planting into undisturbed soil) has not been adopted here, in part because the soil gets too dense for bean-harvesting equipment. Cover crops, used in wetter climates to enrich and stabilize soil, here serve to wick away soil moisture faster through evapotranspiration than from soil left bare. Industrial hemp needs too much water for dryland farming. And so on.

The future, as a result of these challenges, tends to promise changes in bigpicture economic strategies for farms, rather than widespread investments in new soil-management practices. Farmer retirement also factors in – at 63, the average age of farmers in Dolores County is well above the already alarming national average of 58.

“I don’t think the outlook is good. I don’t know how long people can hold on to what they’ve got. People are going to have to make choices that will take farm ground out of the picture,” worries Eric Guynes.

Forst is more optimistic than many: “I don’t think the hope is lost. We’re diversifying and changing constantly. I just think you gotta be open-minded [about new techniques]. It’s not a losing battle, because we love what we’re doing.”

The Great Sage Plain hosted plenty of dryland agriculture before modern times – dryland corn was the diet staple for the Ancestral Puebloans who once worked these same fields. Corn was originally cultivated here from about 1 A.D. to about 1280, when most people left the area under severe drought conditions.

Out in one of Coffey’s large fields, his son Mike, a researcher at Crow Canyon Archaeological Center, is growing Hopi corn varieties and helping to demonstrate that Hopi corn can thrive in areas once farmed by Ancestral Puebloans. The Hopi assist in this project, because they are interested in validating their cultural traditions and origin story that links their heritage to Ancestral Puebloans around Mesa Verde and the Great Sage Plain.

On a stormy day in early October, Coffey begins to harvest the small corn patch. The long ears of Hopi blue aren’t as robust or plentiful as they were in 2015, when the same plot yielded 40 bushels an acre. But there is a crop, suggesting that Ancestral Puebloans could have survived a drought like this.

Coffey says there is evidence of negative societal impacts from drought in the archaeological record. “If you have a short year it’s really going to affect the economy and social structure – the way the Ancestral Puebloan people did business.”

In modern dryland farm country, everyone is watching the weather, praying for snow and rain, and hoping for a much better 2019 growing season.

The survival of many farms may depend on it.