Since the November election, when incumbent commissioners Gerald Koppenhafer and Larrie Rule were reelected easily, the county commission has taken pretty much the same stance on land-use decisions that it had before.

The board has proven sympathetic to gravel pits and related operations, but has taken a dim view of commercial or industrial enterprises that seek to expand in agricultural areas.

On Nov. 17, the commissioners granted unanimous approval for a high-impact permit and a special-use permit for a gravel-mining and -crushing operation at 39238 Highway 160 that will be the third in a one-mile stretch west of Road 39.

Some three dozen people attended the public hearing and half of them made comments — all opposed to the gravel pit. However, operating under amendments to the land-use code adopted in July that specifically allow gravel operations on agricultural land, the board gave approval to Four Corners Materials to operate on land owned by the Eldon Simmons family.

The commissioners stipulated that the hours of operation be 7 a.m. to 6 p.m., cutting one hour off the evening closing time as proposed by Four Corners, and that there be a yearly review of the gravel mine to check on how any complaints from neighbors were being handled.

Peter Kearl, resource environmental manager for Four Corners Materials, successfully argued that the river gravel in a nine-mile strip of land running through the Mancos Valley was some of the best gravel to be obtained in the area.

“The future for aggregate-mining operations for Montezuma County is this strip,” Kearl said.

He also made the case that it would not be cost-effective for Four Corners to haul gravel from a pit it operates near Hesperus.

One area resident, Betsy Harrison, asked why the company couldn’t buy the aggregate it needs to make concrete and asphalt from already-existing mines such as the nearby Noland pit.

But engineer Nathan Barton said Sky Ute, which operates the Noland pit, would not sell to a competitor, and Rule agreed, saying that when he was in the concrete business, Four Corners would not sell material to him.

Several people asked whether the gravel mined by Four Corners would be sold out of the county. Koppenhafer said very little likely would be.

“If aggregate goes out of here it will probably be to Dolores County,” Koppenhafer said. “They trade equipment and other things to Montezuma County for hard rock because there is none in that county.”

But many Mancos Valley residents are unhappy over what they see as a proliferation of industrial operations in their scenic neighborhood.

Missy Miller of Road 38 said she lives within one mile of the operations and is concerned about the cumulative effect of three gravel pits within our agricultural area — the large truck traffic, particulate dust, noise and light pollution. . .”

During the Noland pit’s operation in 2007, she said, she was frightened to turn left onto Road 38 because of the large trucks “barreling down on me.”

Four Corners Materials is being required by the state to make acceleration/ deceleration lanes at the turnoff to its property.

Several residents commented that Four Corners is owned by a large corporate based in Washington, D.C. “It’s not just a local guy,” said Silvia Fleitz.

Fleitz also read a letter written by Patricia Burke of Road H, who said, “The spine of our valley is becoming an industrial park, with all of the distractions and destruction that come with this. . . When land was vast and uninhabited our closest neighbor was a mile away [and] we didn’t have the responsibilities we have at the present time.”

Felicity Broennan of Road G agreed. “We’re watching a beautiful agricultural valley turn into an industrial use and I’m so saddened by that,” she said. “We have a huge pit operating there now and another pit that’s been approved (by McStone Aggregates). It just seems to me this is insanity to have three pits in a row all operating at one time.”

Tom Vaughan said that, with each new high-impact permit that is approved, “a new status quo emerges,” making other, future operations more likely. 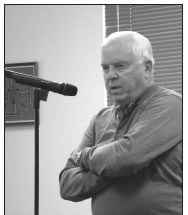 Mancos-area resident Dick Perry speaks out against a proposed gravel-mining operation at a Nov. 27 public hearing. The pit was approved, but must undergo yearly review. Photo by Tom Vaughan/FeVa Photos.

He also said it was difficult to ensure that standards set by the county are followed. “It should not be left to affected citizens to have to hire lawyers to ensure county standards are being met.”

“You’re making a decision that is going to affect this area for a long, long time,” Dick Perry, another neighbor, advised the commissioners.

But both the commissioners and company officials noted that gravel is in constant demand and that sources are limited in the area.

The hearing was slated to be followed by another public hearing on whether to grant Four Corners the necessary permits for an asphalt operation at the same site. But the gravel-pit hearing lasted so long, the commissioners postponed the asphalt hearing until Jan. 12 at 2 p.m.

That discussion is expected to be even more contentious, as Mancos Valley residents have been plagued in the past by noxious odors from a dif ferent asphalt operation. A different public hearing on Nov. 10 drew a smaller crowd, but was interesting because of its ramifications for claims of “grandfathering” for activities that occurred prior to the land-use code’s adoption in 1998.

Richard Vukelich, owner of a two-lot subdivision on Road F near the airport, was seeking commercial zoning and a high-impact permit for an auto-repair and towing shop on the smaller lot, which is three acres and unzoned. The other, 17-acre lot is zoned AR 10-34.

Vukelich said he’d bought the subdivision two years ago and that it had been used previously for a commercial purpose and had been sold to him as a commercial tract.

However, the planning commission had recommended against the commercial zoning, noting there were no surrounding uses that were commercial.

Several neighbors raised objections before the county commissioners. They said the only previous business on the site was a semi-repair and towing shop and that he had expanded that usage by hauling in numerous old cars.

“I believe, as the planning commission does, that this is spot zoning,” said Betty Morris, who lives west of Vukelich. “From Road 21 to the airport except for his three acres is all agricultural/ residential. If it’s zoned commercial and he sells the property, then something could go in there that is even more detrimental.”

Carol Crane of Road F also said he was expanding the “grandfathered” business. She said he had a sign saying junk-metal cars were wanted. “Are we starting a junk yard?” she asked.

Planning director Susan Carver said there were commercial tracts on Road G and that the airport is also commercial.

But commission attorney Bob Slough said the nearest commercial properties were a mile away and that “there’s an argument there” that it would be spot zoning to give the tract commercial zoning.

He also asked whether Vukelich was, as neighbors said, storing used cars on the AR 10-34 tract, “because a person shouldn’t be allowed to create a junkyard, or whatever it is.”

Koppenhafer said, in his opinion and based on an appellate-court decision involving a commercial warehouse that had sought to expand near Mancos, “any expansion of the [grandfathered] use is going to be illegal.”

The commissioners voted 3-0 to define the grandfathered use on the three acres as a towing and truckrepair business only and to deny the request for commercial zoning and a high-impact permit. They also told Vukelich to remove the junk cars.