A lot of you have followed my dog Wally’s story on this page for more than two years now. And since last summer you’ve kept tabs on his post-cancer-diagnosis Doggie Bucket List adventures, when all our Someday Things became Right Now Things. While he was rocking his chemo treatments, we traveled to the Great Sand Dunes and we attempted going to concerts and we ate way more hot dogs than the Surgeon General recommends. We had a professional photo shoot, we camped so remotely that I had to take my first shave in the woods, and when Wally went into remission (that’s the good one—it’s out of remission you don’t want; this confuses everyone), we celebrated with a ritual at his favorite river spot. 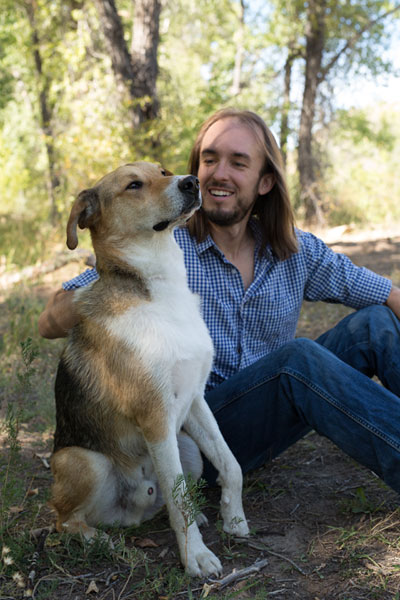 That riverside ritual was the last update I wrote to you all, because in January, I took Wally to the vet for a tooth issue and he came back out with cancer again. At that point, with Wally out of remission (that’s the bad one), the Doggie Bucket List shifted gears. The diems we now carped had much more to do with spending time on the couch and taking slower walks than we used to.

But there was still one big item on the list: go to the ocean. That entry started off as a joke on this page, that we’d recreate the finest beach-running scenes in Hollywood history if someone would sponsor our adventures on their private beach. That Bucket List entry wasn’t nearly as important to me as enjoying all the daily joys of our life together. I wanted those most of all; I just wanted them, plus beach too.

And the window of opportunity actually opened up to have our hot dogs and eat them too. I had the chance this spring to switch day jobs to one that would give me more daily time at home with Wally. And I could also have a gap between jobs in late April. Perfect timing for a road trip to a secluded, pristine stretch of California shoreline.

I put it on the calendar several weeks out at the time: Road Trip with Wally.

I didn’t figure the trek would heal Wally. But we’d fit it in after his second chemo protocol, which was hitting him so hard that we had to keep skipping treatments. Still, the plan was to have him back in remission (that’s the good one) by then. Maybe he’d even be moving better, and livelier, than he’d been since starting this round of chemo.

Not two weeks after putting that on the calendar, Wally started yelping when I’d pet the side of his face the wrong way. We’d never treated that tooth problem, so I took him back to the vet.

It wasn’t the tooth.

“We could run tests,” his vet said, “but I think we both know what this is.”

Then she said some more things about keeping an eye on him and making him comfortable, and then she told me she’d be out of town that weekend, and inside I was like, why are you telling me your travel schedule, and then I was like, “Oh,” and the room closed in on me and every hope I’d buttressed for 11 months collapsed at once.

“You’re saying I could have to let him go this weekend,” I practically accused her.

That was a Wednesday morning. I didn’t believe her. Wally wasn’t suffering THAT badly. We weren’t done yet. But I left the vet’s office and I immediately cleared every commitment I had through Sunday. I told my work I wouldn’t be coming in. And I didn’t care what anyone said or did or felt about it.

This moment right here was the entire Doggie Bucket List, focused down to a pinprick, as tight and narrow as a fainter’s vision. Do it right now. If Wally lived another six weeks, or six months, or six years, according to plan, then I would still cherish this long weekend we had together. And if he died, the last thing I ever wanted to say in retrospect was, “Gee, I wish I’d taken off Thursday to be with him.”

That was almost seven weeks ago, when I listened to all the things that dog taught me and prioritized what was important right now over everything else. And I’m finally writing this to all of you while my calendar says Road Trip with Wally. I didn’t make it to the beach this weekend, but I did make it to the desert, where Wally and I tried to go every spring. I took a long walk up an empty trail, where I didn’t see a single other human being. But I did hear someone’s dog in the junipers.

I stopped to listen through the wind, thinking maybe I’d imagined the sound, and I heard the collar one more time. The dog never materialized. But he was there. He’s always there.

Zach Hively writes from Durango, Colo. He can be read and reached through http://zachhively.com and on Twitter @zachhively.