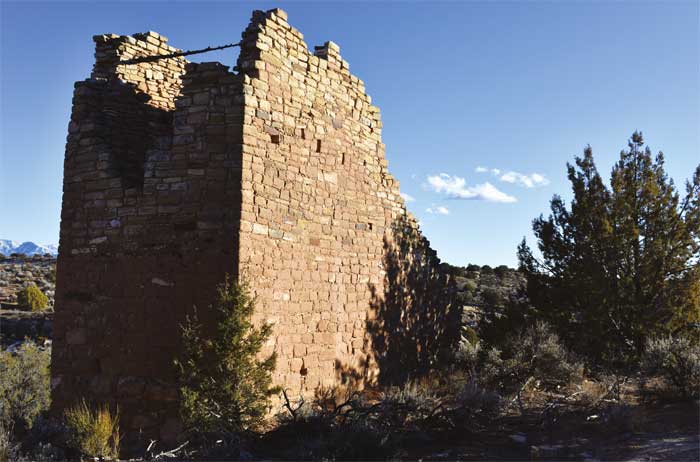 Oil and gas lease auctions on Bureau of Land Management lands in the vicinity of Hovenweep National Monument have drawn considerable concern.

But the BLM is moving full speed ahead with plans to make more acres available for energy development, despite opposition from some Native American tribes, conservation groups, and local interests.

The speed with which the BLM is leasing new areas of public land is dismaying some observers.

The agency plans an auction this month of 19 parcels totaling some 32,000 acres in San Juan County, Utah, near Hovenweep, despite calls for it to do a more thorough analysis of the impacts of exploration and drilling.

Most of the parcels lie north of the monument and some are less than 10 miles away, leading to concerns that they will affect the visitor experience at Hovenweep, which was created to preserve Ancestral Puebloan structures. In 2014 Hovenweep was given the designation of a Gold-Tier International Dark Sky Park, the designation for the darkest places.

In addition, the auctions are raising worries about how energy development might affect the landscape, which is rich in cultural sites and artifacts and is even the location of a paleontological dig. “2018 marked a rapid change in the way that BLM has been leasing land,” said Amanda Podmore, a southeast Utah conservation consultant for the National Parks Conservation Association, a nonprofit that supports national parks and monuments.

In 2018, a deputy under then-Interior Secretary Ryan Zinke told the BLM to get rid of “unnecessary impediments and burdens” in the process of issuing leases on public lands. As part of its pro-energy policy, the Trump administration has pushed hard for more and quicker oil and gas development. The BLM drastically reduced the chance for public comment on energy lease proposals and reduced the environmental analyses it would conduct. 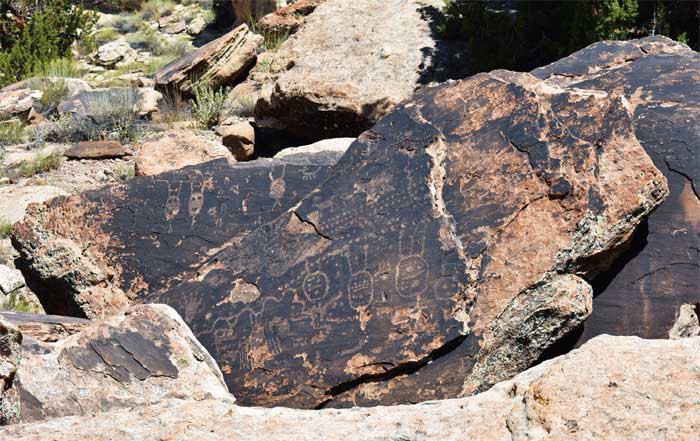 The area slated for oil and gas leasing is replete in cultural resources such as this ancient rock art. Photo by Gail Binkly.

There were two large lease proposals in the Four Corners area in 2018, including one proposal in March 2018 for 20 leases totaling about 29,000 acres in southeastern Utah in areas including Alkali Canyon, Squaw Canyon, and Tin Cup Mesa. Then in December 2018 there came a proposal for 15 leases totaling about 26,000 acres in the same area. That proposal drew formal protests from the All Pueblo Council of Governors and Pueblo of Acoma, who said the BLM was not considering impacts to cultural properties. The Hopi Tribe also asked the agency to drop the proposed leasing.

The National Park Service has weighed in with concerns as well. In an Oct. 23, 2017, memo regarding the proposal for March 2018, Kate Cannon, superintendent of the Southeast Utah Group of national parks and monuments, said the leases had “the potential to affect resources such as air quality, dark night sky, scenic value, soundscapes and groundwater quality” for Arches and Canyonlands national parks and Hovenweep and Natural Bridges national monuments. She wrote that concerns the Park Service had previously expressed about air quality, dust emissions, visibility, dark skies, noise, groundwater quantity and quality, and the potential for earthquakes from hydraulic fracturing had not been adequately addressed.

The NPS asked that 13 parcels proposed for lease that were less than 20 miles away from Hovenweep be deferred, but the BLM rejected the request.

The Navajo Utah Commission of the Navajo Nation Council unanimously passed a resolution in February 2019 requesting that the BLM “protect cultural and natural resources of the Navajo aboriginal lands in the McCracken Mesa area, including Alkali Canyon, Tin Cup Mesa, Monument Canyon, Squaw Canyon, Cross Canyon and Recapture Canyon and withdraw the lease parcels slated for auction in the March 2019 lease sale.” 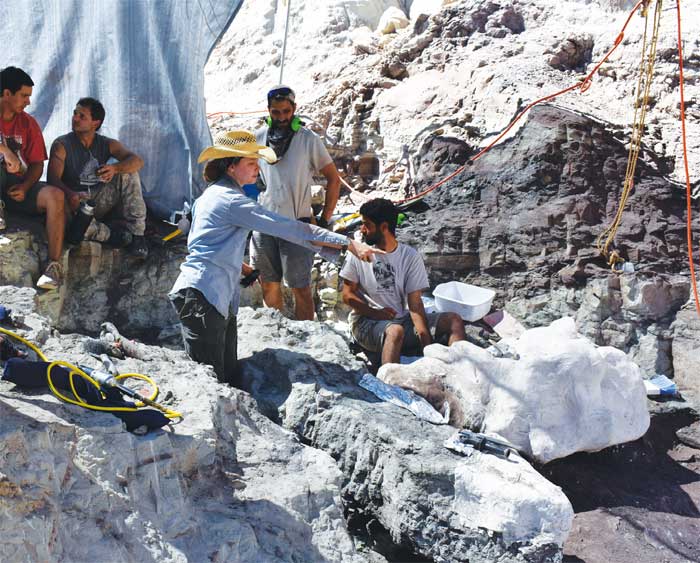 Other activities in the leasing area include paleontological digs such as this one at the Gnatalie Dinosaur Quarry. Photo by Gail Binkly.

The resolution states that “there are numerous undocumented cultural sites in the many canyons, along the canyon rims, and on the mesas near McCracken Mesa. . . including. . . very significant traditional and ancient cultural sites. . . at extreme risk of damage and vandalism due to existing and planned oil and gas exploration and development.”

The BLM moved forward with the sales, but in April 2019 the Southern Utah Wilderness Alliance, an environmental group, filed a suit in federal court in Utah against the BLM and Interior Department over the 35 leases offered in 2018. SUWA’s complaint states that the BLM did not do an adequate analysis of greenhouse-gas emissions that would result from oil and gas development, and that the proposal had other deficiencies.

Podmore said those proposed leases were suspended in August of this year because of the suit.

“This leasing is happening so quickly, they [BLM officials] keep tripping over themselves,” Podmore told the Four Corners Free Press. “The BLM is rushing so much, they’re not doing an adequate analysis.”

According to SUWA’s complaint, since the start of 2017 the number of leases the BLM has offered for auction in Utah is seven times as many as occurred in a similar amount of time under the Obama administration.

“Located on the doorstep to Bears Ears, Canyons of the Ancients, and Hovenweep National Monuments,” the complaint says, “these leases contain well-preserved evidence of past peoples and cultures including cliff dwellings, pueblos, kivas, petroglyph and pictograph panels, ancient roads, and Chacoera (circa 900-1150 A.D.) ‘great houses.’ Numerous Native American tribes consider these sites sacred.”

However, the BLM is proceeding with the current lease auction of 19 parcels, which are in the vicinity of the suspended leases. This batch of leases was originally offered in March of this year but was delayed because of protests by several tribes and conservation groups whose concerns include a belief that a more thorough cultural-resource inventory is needed.

“They have not done any more cultural- resource inventories since the sale was canceled in March,” Podmore said.

“Some of these parcels have only seen a survey of 4 percent [of their area], yet they might have 20 to 40 known cultural sites within their boundaries just from that survey,” Podmore said.

In a July 1 letter, the Business Owners of Bluff, Utah, a town that lies about an hour away from Hovenweep, expressed opposition to the lease auction to the BLM.

“. . .Hovenweep National Monument is an International Dark Sky Park of the gold-tier and an economic driver for the Town of Bluff and San Juan County,” the letter states.

“. . .As a gateway community to both Hovenweep and Bears Ears National Monuments, we are concerned about the alarming rate at which BLM lands near those monuments are being leased for oil and gas development. The scale and rush nature of the leasing leaves us questioning the impacts to our local economy and the level of analysis undertaken by the BLM.”

The letter notes that the BLM’s draft environmental analysis for the September lease sale does not analyze the impact to dark skies.

“This latest lease sale could allow for leasing as close at 4 miles to Hovenweep, which would place oil and gas operations directly in the park’s viewshed,” the letter also states, commenting that industrial light pollution can be seen from as far away at 35 miles.

The resolution states that “the cultural landscape of the area surrounding Hovenweep National Monument contributes to the beauty, economy, cultural heritage preservation, and recreation values of San Juan County” and that energy development “may lead to the degradation of visitor experience, cultural heritage preservation, dark skies, air quality, and water quality in that area.”

Podmore said she herself is concerned about three primary issues regarding the leasing.

The NPCA offered a tour of some of the lease sites in early August. One had a number of striking petroglyphs carved into rocks. Podmore said they were created by different peoples, including the Ute Tribe, stemming from the Archaic and Basketmaker time periods.

Another site contained a paleontological excavation swarming with people. The Gnatalie Dinosaur Quarry (named in recognition of the itch-producing gnats that plague the area) lies along the Hovenweep Road and is excavated just one month out of each year.

This dig was the 11th such one, according to Alyssa Bell of the Natural History Museum of Los Angeles, who was at the site. She said most of the people there were volunteers from the museum. The bones they excavated were being shipped to the museum.

The site contains numerous fossils buried in the Morrison foundation, a type of sedimentary rock that has been a bountiful source of dinosaur bones. Most found at this site are from sauropods, she said, a type of dinosaur with long necks and tails. That day, the focus was on bones from a diplodocus.

Bell said the idea of oil and gas exploration occurring in the area is worrisome because there might be little protection offered for fossils. “Our concern is with paleontology – there might not be a system,” she said. “If they have a monitor, that’s fine.”

Podmore said the BLM needs to consider the cumulative effects of such development rather than letting it happen piecemeal.

“A landscape-level solution – that’s what groups like NPCA want,” she said. “There needs to be more planning regarding oil and gas development in the area.”