The common prairie dog may be smarter than you think — a lot smarter, according to researchers who hope to broaden species protection for the burrowing rodent they say has been wrongly tarred as a varmint.

Not only do the creatures live in highly social colonies, and towns within those colonies that have been likened to suburbs. Prairie dogs talk. 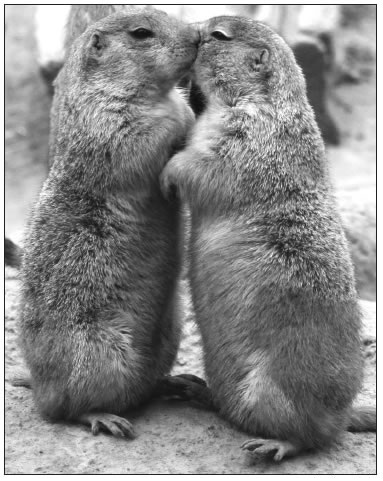 “What we’re finding is the communication system borders on language,” Con Slobodchikoff said in a phone interview. “At this point, it’s probably the most sophisticated that has been decoded among animal species.”

Slobodchikoff is a biology professor at Northern Arizona University who’s studied prairie-dog communication for a number of years. He joined forces with The Prairie Dog Coalition and WildEarth Guardians for a publicity push on the dogs’ dialogue — and plight — in Denver on Feb. 2.

Groundhog Day to most folks, Feb. 2 has been dubbed Prairie Dog Day by WildEarth and the coalition because, well, there are no groundhogs in the vicinity. The event was celebrated in Denver with educational trips to a prairie-dog colony, a person wearing a prairie-dog costume, and, the guest of honor, a live prairie dog furnished by the Denver Zoo.

The lighthearted event carried an earnest message: prairie dogs, whose populations have decreased by 98 percent, are worth saving.

That may be a hard sell to farmers and ranchers who view the creatures as a scourge.

Slobodchikoff said at least 200 species are dependent to some extent on the prairie dog, and breaking down the food chain can have unforeseen consequences to the entire ecosystem.

He also said prairie-dog burrows also help rainwater percolate into underground aquifers. That precipitation could otherwise run off and erode the soil.

“You can think of prairie dogs as the canary in the coal mine,” Sterling Krank said. “What’s happening to them is happening to other species in an ecosystem.”

The dangers prairie dogs face are many, said Lauren McCain of WildEarth. They include poisoning (on the rise), shooting, bubonic plague and habitat destruction through development and the expansion of the oil and gas industry.

“What we’re seeing over the past 100 years is the gradual attrition of what was once the prairie-dog empire,” McCain said.

She, Slobodchikoff and Sterling Krank acknowledged the prairie dog has a lot of negativity to overcome in the West, but also say the dogs have gotten a bad rap.

Countless prairie dogs are poisoned during drought years upon the erroneous belief that signs of colony expansion mean the number of prairie dogs within the colonies has also grown. It hasn’t, McCain said.

Slobodchikoff said it’s also untrue that prairie dogs eat all the grass that cattle could be eating. He said such studies as exist show cattle have gained weight when sharing grassland with prairie dogs.

Slobodchikoff also said he’s found no proven contemporary examples of cattle or horses breaking their legs in prairie-dog holes, although McCain said there could be historical examples of it.

All in all, the prairie-dog enthusiasts said, there’s no reason to eradicate prairie dogs and plenty of reasons to work with landowners and the federal government to better assure their protection.

It’s not random barking, or even instinctual barking. Prairie dogs speak with a purpose, he said.

“There’s a tremendous amount of information these animals provide each other in the alarm code,” Slobodchikoff said. “It’s very impressive. So far, this is more sophisticated than it is with chimps or whales.”

They have distinct sounds to denote various predators approaching — from coyotes to house cats; from dogs to humans, to hawks. Not only that, but it appears prairie dogs have developed a code to describe individual features, such as the color of shirt a person is wearing, and the color of dogs.

In one remarkable example, Slobodchikoff sent a man wearing a blue shirt into a prairie-dog colony. The rodents emitted a specific call. Then, the man returned carrying a shotgun.

“After that, whenever he came, they labeled him with a different type of call, signifying he was somebody to watch out for, that he was dangerous,” Slobodchikoff said.

But how can Slobodchikoff tell what the sounds prairie dogs make actually mean?

Research. He said he recorded prairie-dog calls in a variety of scenarios and took those recordings back to his lab, where high-tech equipment broke the sounds into a sonogram and measured points on the sound waves. The program was designed to determine whether the sounds were the same for, say, a blue shirt.

“We know that the prairie dogs are responding to information in the call, not just the presence of the predator.” So, do prairie dogs tell each other “Happy Groundhog Day?”

Slobodchikoff and the women erupted in laughter.

“They have social chatter and we haven’t been able to decode these because we don’t have a point of reference,” Slobodchikoff said.

“Maybe in their chatter, they are saying, ‘Are there going to be six more weeks of winter?'”