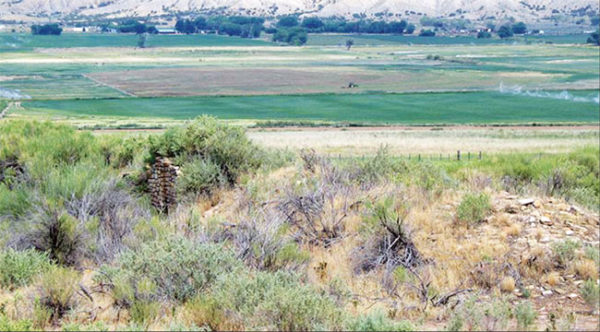 The Montezuma County commissioners’ passage earlier this year of a resolution concerning federal land acquisitions is complicating the solution to an already knotty problem: the development of an alternate public access route to Yucca House National Monument, a small but significant archaeological site southwest of Cortez.

Three years ago a transfer of private land – through a donation – was proposed as a way to resolve an ongoing problem with access to Yucca House, located near the base of the Sleeping Ute Mountain. The 34-acre site, which is managed by Mesa Verde National Park, contains a large Ancestral Puebloan ruins group that includes one of the few Great Kiva rooms in the Four Corners area.

For nearly a century since its creation, getting to Yucca House has involved visitors traveling across a privately owned ranch and parking within a few yards of the main residence, an arrangement about which the current owners – Box Bar Ranch, LLC – understandably have some reservations. They have maintained that even though visitor traffic is limited, it can clash with day-to-day operations and possibly result in property damage and vandalism.

As Montezuma County Commissioner Keenan Ertel observed during a previous discussion of the issue in 2014, “I don’t think it’s fair to have your front yard used as a parking lot.”

Still, former owners of the ranch obviously had no objection to this arrangement and, in fact, donated the land to create the monument, which was designated by President Woodrow Wilson in 1919.

Henry Van Kleek had donated the original 10-acre site, and rancher Hallie Ismay, its unofficial steward for six decades, donated another 24-acre buffer zone in 1991 to better protect the undisturbed ruins. And the deed to the ranch property includes a permanent easement to allow public access to the sprawling ruins.

But after the death of Ismay in 2002, the ranch was purchased by Cortez businessman Joe Keesee, whose representative approached the commission in 2014 to request the portion of County Road 20.5 that provides access to the monument be vacated.

The remote ruins group has fewer than 1,000 visitors annually, according to Mesa Verde Superintendent Cliff Spencer.

Much of the ruins complex lies underground, and there is little visible but crumbling walls and mounds covered in brush. (Although the site was named Yucca House because the Ute Indians described the area as having a great deal of yucca, there is reportedly no yucca growing at the monument today.)

There are no facilities and no groomed trails, and thus little to attract tourists. However, the park conducts occasional guided visits there and the site is open to the public.

Spencer proposed a possible solution for the access issue to the county in 2014 – one that has been in the works ever since but is still far from settled.

Adjacent property owners Bernard and Nancy Karwick have offered to donate an additional 160-acre tract on which an alternate approach could be constructed, Spencer explained to the commission at the time, but accepting the gift would require either a boundary adjustment or federal legislation that could take a few years to get accomplished.

In the meantime, he said, the Park Service would be opposed to closing the route through the Box Bar Ranch.

After a public hearing in 2014, that request was denied, at least until an alternate route to the ruins could be developed, and the commission appeared to support the Karwick donation as a viable option.

However, in February of this year, the commissioners unanimously passed a resolution “supporting no net loss of private lands” in the county. They argued that because only about 27 percent of the county is in private hands vs. 40 percent that is federal public land and another 34 percent that is tribal, in the future any acquisition of lands by the federal government should be offset by an equal allocation of private land.

“This balance can be achieved through land exchanges within Montezuma County, auction of equitable public lands to the private sector, or other available legal means. . .,” their resolution states. One goal of the resolution is to preserve what they see as a dwindling property- tax base that is not adequately offset by the federal PILT (Payment in Lieu of Taxes) program.

The commissioners have voiced concern about private-land transfers to Canyons of the Ancients National Monument and other land acquisitions by the BLM and Forest Service. Even though they have not been occurring wholesale and are done with willing sellers, and even though the land involved is often agricultural — meaning the owners were paying very little in property tax — the commissioners have argued that taking those lands out of private hands precludes the possibility of future, more lucrative uses that might bring more tax revenues.

The question of tax revenues is looming larger as the county sees fewer taxes from traditional sources such as carbon-dioxide extraction, which in the past reliably supplied about half the county’s property taxes. But Kinder Morgan’s production of CO2 has swung up and down in recent years and is expected to decline over time.

At the July 24 commission meeting, Spencer learned the commissioners have developed some strong reservations about the Karwick donation – which would require a letter of support from them before federal action would be considered.

Ertel pointed out that the resolution passed in February now requires any land transferred to a federal agency result in no net loss of taxable property without fair compensation to the county.

“I understand times change, but three or four years ago you were supportive of this [donation],” Spencer said. “You said you weren’t going to stand in the way of a private property owner doing what he wants.”

“We supported getting the Ismay Ranch separated from Yucca House,” Ertel responded, adding that the reduction of only 160 acres “is not meaningless to the tax base,” even in a county of over 2,000 square miles. He said the commission is “still willing to talk a deal.”

“Maybe we should include the BLM and the Forest Service in the conversation,” he added, suggesting Spencer return during the Sept. 18 meeting, when the agenda includes a monthly discussion with representatives of those federal lands agencies, to see whether some sort of property exchange might be feasible.

In a subsequent interview with the Free Press, Spencer said he plans to attend that meeting and consult with the federal agencies beforehand. He expressed optimism about resolving the impasse, but declined to discuss what recourse might be explored otherwise.

“We’re going to try to work as best we can with the commission and with the other federal land holders on reaching a solution that’s equitable to everybody,” he said.

Access to public lands through private property is also raising some sticky issues with residents of a Summit Ridge subdivision that borders on BLM land the agency wants to open to recreation. Currently the subdivision’s roads are marked wirh red signs, which means they are maintained by the residents, who turned out en masse at a July public hearing to protest the county re-signing them as green roads, indicating they are open to the public. The residents, who recounted spending thousands of dollars on road maintenance, expressed fears that increased traffic and heavy vehicles such as horse trailers would take a heavy toll on the roads, and more visitation would equal more incidents of vandalism. They demanded the county take responsibility for maintaining the roads if they made this change, and the commissioners in turn said the BLM should shoulder some of the burden. The matter was shelved for further discussion.