Hey, the weather is great, and I need to get away so let’s go on a road trip or ride up into the forest, I remember a real neat woods road we used to drive in the fall to see the colors change, let’s go there. There is the turn-off, right by that big tree but it is CLOSED? What is going on? That road has been there over 100 years! I’m going to see heads roll over this! Sound familiar? This is happening all over the Western States’ federally controlled lands resulting in lots of people getting pretty worked up. So what is this all about? What has happened to our “public lands”?

This cannot be explained in a one-page article, so will only try to give a “bullet point” highlight for the person on the street that doesn’t know what I am even talking about now. The entire subject is mired in U.S. and State History. In the beginning was the U.S. Constitution and the Constitution was declared the Supreme Law of the Land. Under the Supreme Law, the new to be Federal governing body was not to own or control any “public lands” in perpetuity. Individual states were to be fully sovereign, governing the people to be Free and ensuring their God given rights of Life Liberty and Pursuit of Happiness (Property). The foundation was for individual property ownership. 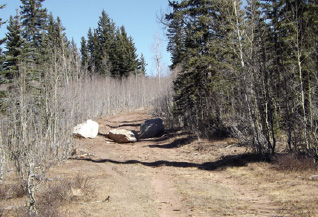 A section of granted right-of-way, the old
historic Lost Canyon wagon road that was
popular with hunters and other recreators. Photo by Dexter Gill.

To expand the new country with more sovereign states, territories were acquired which provided for what is today most of the 11 western states. These new territories were “public lands” open for settlement to develop new states from. After the Civil War Congress sought to expedite settlement and new State establishment, which would be consistent with the Constitutional mandate of the Federal body not retaining any public lands in perpetuity. One of the key actions was in 1866, the passage of RS-2477, now codified as Title 43 U.S. Code 932 which applies to all public lands. The law states “The rightof- way for the construction of highways over lands not reserved for public uses, is hereby granted”. The word “highway” was a legal term which included carriage-ways, bridle-ways, footways, bridges, ferries, railroads, and canals as well as frequently traveled and periodically maintained roads. In Colorado this can be roads formed by the passage of wagons etc. over the natural soil. This expedited homesteading, mining, farming & ranching and economic development. They understood that all economic wealth comes from the ground and its resources.

As new states were established, the previous territorial public lands then became the lands of the state. The federal “highway” Right-of-Way Grants transferred to the new state for protection of legal grant. The unsettled and unclaimed lands in the new state were held by the federal body for disposal into private ownership on behalf of the state. By 1976 the federal government decided they would just keep the lands it had not sold for the state, recognizing the natural resource values they could exploit at the expense of the state, and exercise control over the state government. The Congressional act, Federal Lands Policy Management Act (FLPMA) of 1976 took full control and ownership, in perpetuity, of the lands of the State that it had not sold for the State, mostly Forest Service and BLM lands, an action contrary to Article I Sect. 8 of the U.S. Constitution. The FLPMA did state that all existing RS-2477 Right-of- Way Grants would continue, and nothing would terminate them. To compensate for taking away the states’ lands, the federal agencies were to coordinate all management actions with the local governments, the counties, which failed to happen.

So what is the problem? Starting in 1976, both the Forest Service and BLM began curtailing and ending active resource management, protection and development, causing deterioration to the local economy and resources. More recently access and use of these supposed public lands, has been steadily closed to the public, causing economic damage to recreation, hunting, fuel wood opportunities as well as impeding fire and rescue response. This is all contrary to FLPMA assuring that the RS-2477 Right of Ways would continue and not be closed. Seventy-three percent of our county is in various government ownership and control, which includes all or most of our critical watershed and the associated outdoor recreation, tourism, hunting, fishing, wood products and livestock grazing opportunities. That leaves only 23 percent in private ownership as tax base to support the county. The economic future of this and other counties is currently in the hands of outside interests. The recent mismanaged state controls implemented for the pandemic greatly exacerbated the damage to the economy already caused by the federal land access and use issue. To survive and grow, the counties must regain control of their own destinies.

Can that be done? Certainly, but only if we step out and take action to protect the rights of the people in all areas that the county and state is duty-bound to ensure. One of those, for starters, is to protect the granted “Right-of-Ways” identified by RS -2477, now Title 43 U.S. Code 932, to provide the same opportunities for economic use and development today as when the law was passed. With the new interest in getting out and recreating, the Right-of-Way closures have greatly reduced the people’s rights and the economic opportunities. The county must be in the driver’s seat, not outside interests from other states and the Front Range of Colorado. Do we believe in the “Rule of Law”? If so, then we need to follow it fully!