The next controversy? Plans to site a propane-supply depot in a subdivision concern some neighbors

Another land-use controversy may be in the making in Montezuma County, this time involving a proposal to site a 20,000- to 30,000-gallon Amerigas propane-storage tank on a subdivision lot near the intersection of highways 184 and 145. 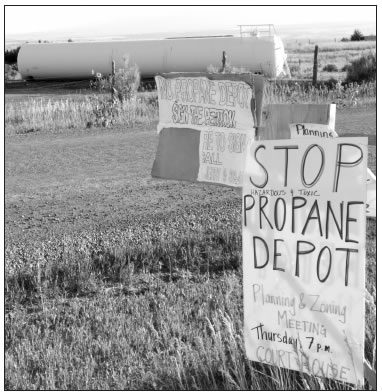 A propane-storage tank owned by Amerigas sits in a subdivision near County Road T.5 and highways 184 and 145 near Dolores. Some neighbors are unhappy about plans to operate a depot there. Photo by Wendy Mimiaga.

When a public hearing to discuss issues involving the tract in question came before the county planning commission on July 24, the meeting room was packed.

The hearing, which had been continued from the previous month at the request of the applicants, was ostensibly to review and determine zoning and/or use on an existing 19-acre lot in the Swanner subdivision, consider a presketch plan that would have split that lot into two lots, then hear a request for commercial zoning on the newly created lot — which would be the site for the tank.

However, the hearing ended rather abruptly, without any public comment being taken and with the future of the proposal undecided.

Planning-commission Chairman Bob Riggert opened the hearing by reviewing the basic facts, then stating that he was ruling that the tract in question, Lot 4 of the four-lot Swanner subdivision, is currently zoned ARES (Agricultural-Residential Existing Subdivision). Any subdivisions in existence before the county land-use code was adopted in 1998 are considered ARES; the Swanner subdivision was created in 1995.

Mike Green, attorney for applicants Richard and Marie Swanner, said they were withdrawing their application to divide the tract, and contended that meant there was no need to rezone it as commercial. 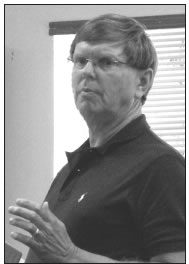 Bob Riggert is chair of the Montezuma County Planning Commission. The group has been wrestling with many controversial land-use proposals and developments in recent months. Meetings of the Dolores County Planning Commission have likewise become contentious in the past year as oil and gas development parks concerns. Photo by Tom Vaughan/FeVa Fotos.

Green seemed to be seeking a decision from the planning commission on historic use on the tract that might mean industrial/commercial operations there would be considered what is known in the vernacular as “grandfathered.” He said uses in the subdivision have been mixed for decades.

At a county-commission meeting on May 27, Green stated that construction equipment and construction-yard waste has been stored on Lot 4, and that it had even been a helicopter landing field in the past.

Green told the planning commission he understood that the applicants would still need to seek a high-impact permit to house the propane depot.

However, Riggert said he had made his ruling that the lot was zoned ARES, and that deciding historic use was beyond the role of the planning group. Unless other members of the board wanted to appeal his decision, he said, there was nothing more to discuss, and the applicants would have to go to the county commissioners.

When Green tried to disagree, Riggert cut him off, saying he was out of order. Planning-commission member Casey McClellan asked whether the group could discuss the issues and perhaps offer the applicants some guidance, but Riggert said, “No,” at which point the applicants left, along with nearly everyone in the audience.

The touchiness of the subject and its potential to spawn a lawsuit were perhaps reflected in the fact that neither Riggert nor Green would comment to the Free Press about the case, not even to verify the basic facts involved.

At their meeting May 27, the county commissioners had likewise cut off discussion about the propane tank when a group of angry neighbors showed up to speak.

Planning Director Susan Carver told the board she had received complaints about the Amerigas tank, which has already been brought to the site, though it is not hooked up and operating.

Green explained the plan, saying the Swanners had used the lot for storage previously and this “would be a storage facility for Amerigas to come get gas out of.”

Several audience members wanted a chance to give their opinion on the proposal. One woman brought photos and thrust them before the commissioners, saying, “This is the view out my window now!”

But Commission Chairman Gerald Koppenhafer cut off discussion, reminding the group that this was not a public hearing and that the proposal would have to go through the regular process, first coming before the planning commission.

He also advised Green to tell the applicants that the tank could not be hooked up and there could be no more construction on the site until the proposal is approved.

Discussion on the historic-use question had not been scheduled before the county commissioners at press time.

Carver told the Free Press there was no high-impact-permit application on file as of July 25 from Amerigas.

The county land-use code states that, for subdivisions zoned A/R ES, “the use standards will conform. . . with those standards established when the final plat was approved along with the covenants of record.”

“What’s not understood is the use standards for Lot 4,” Carver said. “Do they have the right to use it for commercial, or not?”

She said she was not certain whether there would be a formal public hearing before the county commissioners on the historic-use question, or just a review.

“It’s a unique situation and I would need to get board direction,” Carver said.

Either way, the high-impact permit would require public hearings before both the planning commission and county commissioners.