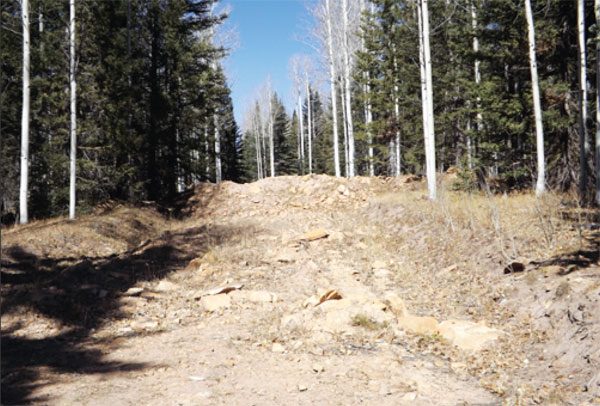 A closed historic wagon road in the Haycamp area of the San Juan National Forest. In the author’s opinion, this means fire-response time ruined, past recreation
use ended, a negative impact on wildlife, increased noxious weeds,and fuel wood-gathering ended. Photo by Dexter Gill.

What in the world is the fuss over some dirty old roads all about? Most of the discussions center on current Forest Service road restrictions and closures, but do not look at the history of why there is this issue.

Meaningful history began about 1860 with the noise of some states deciding to secede from the Union and others deciding to not let them secede. They are still arguing over what the actual reasons were. The political fallout directly impacted the future of all the Western states to be, by ignoring much of the Constitution as it related to formation of new states from territories. To encourage settlement and development of the Western territory lands into new states following the “uncivil war,” legal access for roads was needed for mining claims, homesteads and to provide for development of the land. To ensure road access would happen and be available without conflict, in 1866 ( one year after the war) Congress passed Revised Statute 2477, which was probably the shortest act ever passed, which read in total, “The right-of- way for the construction of highways across public lands not reserved for public purposes is hereby granted.”

Shortly after the un-civil war, Colorado applied for statehood; however, maintaining control of political power was of concern to Congress, so was denied. After several tries, Colorado finally obtained statehood in 1876 with a caveat on certain lands. There were substantial lands that had not been claimed by towns, farmers, ranchers, miners, etc.. These were referred to as “unappropriated lands” with no private ownership claims. The federal government was to sell the unappropriated lands that would be “clear” for sale, acting as the “land agent” for and on behalf of the newly established State of Colorado, thus making the new state equal to others in private ownership of lands. Of course the federal government was to keep 95 percent of the sales. Unfortunately federal officials proved poor salesmen.

In 1905, Congress established the Montezuma National Forest, which was later added to and renamed the San Juan National Forest. The establishment of the National Forest from unappropriated lands of the State of Colorado was not consistent with Art. I, Sec. 8, Clause 17 of the U.S. Constitution. Lands not in forests continued under control of the General Land Office, later to become the Bureau of Land Management, which the objectives of land sales and rights-of-ways were still prominent. The road grants for access and use under RS 2477 were still valid.

In 1976, Congress passed the Federal Lands Policy and Management Act (FLPMA), declaring the unsold unappropriated lands to be kept by the federal government, again in violation of the Constitution of the United States, and Compact with the State of Colorado at statehood. The federal government declared the now-federal lands as “public lands” of all the people of the United States, and repealed and replaced several pre-existing land laws, but specifically and clearly reaffirmed the validity and intent of RS 2477 and all grants previously made by it after 110 years of success. The FLPMA gave people and entities outside the state power and control over the resources and economy of the state and counties via Washington, D.C., politicians.

The Forest Service and BLM then had new directions on how to manage the newly acquired federal lands. The management and use policies were being manipulated by so-called environmental interests, which were and are seeking to restrict use and access by man on those lands. As new management plans were prepared, they changed from resource protection and management of timber, water, forage, and wildlife, to recreation and perceived visual appearance, as preferred by certain public interests. Management tools such as logging and grazing have been greatly reduced and eliminated in many areas. With reduced protection and management, the push was to start closing roads, thus creating more “wilderness lookalike” acres, limiting public access and use. Allowing natural forces such as wildfires and storms has become the preferred management direction. Even recreation use is now being limited and restricted.

The above actions are now being observed to be resulting in insect infestations and wildfires destroying the forests, damaging the watersheds, reducing wildlife habitat, degrading waters and recreation and negatively impacting local economies. The light is now dawning that the past 42 years of no management and closing road access was a very bad decision. So some began to ask, how can the mess be corrected?

Enter here at stage right is the still-valid 152-year-old Congressional action, RS 2477, on most roads! One step at a time, first stop the closing of historically granted roads to allow use, protection and management actions to once again begin to take place. With the counties as the recognized legal authority to ensure that the public’s access over the historically granted road right-of-ways is maintained, the multiple-use principles of the lands and resources can once again be implemented through the true coordination process between the county and the two federal land agencies.

This is a brief overview of how we got to where we are today. The issue of RS 2477 roads is new to most of the public and has raised its head due to the last 42 years of restricting public access, use and beneficial management of the public lands. This has exposed how many of the acts of Congress regarding the lands have been and are unconstitutional. The bottom line in Colorado is that the problem began 142 years ago at statehood, when the Congress, due to political power struggles, chose to not comply with the Constitution in creation of the state, then again 42 years ago by expanding their choice of non-compliance by enacting the Federal Lands Policy and Management Act, by “taking” the lands of the state.