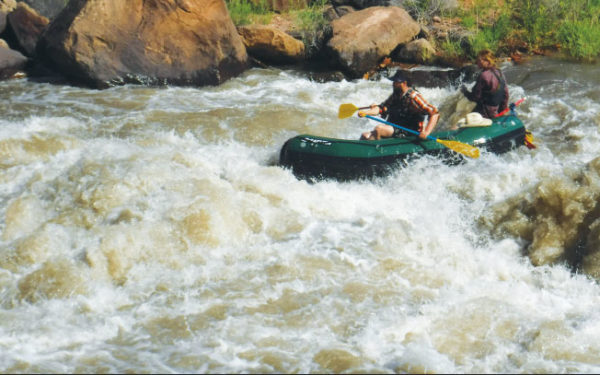 The start of this year’s rafting season on the lower Dolores River was for only the hardy. When managers began ramping up releases of frigid waters from the bottom of McPhee Dam on March 29, snow still lay along much of their path, and more fell on the first weekend of the managed release, April 1 and 2.

But the weather and the early timing can’t chill the red-hot enthusiasm of recreational boaters not just from the local area, but around the nation.

Managers of McPhee Dam and Reservoir with the Bureau of Reclamation and Dolores Water Conservancy District knew for some time there would be a spill this year, and a big one – the first of this magnitude since 2008. There was a recreational boating release last year, but it was much shorter, with lower flows, and was an on-again, off-again proposition until the last moment.

2017 is the kind of year boaters dream of, when they can plan months ahead for a days-long ride through a rugged, primitive, scenic landscape that changes from ponderosa forest to piñon-juniper to sagebrush plain.

However, as the Scottish poet Robert Burns put it, “The best-laid plans o’ mice and men gang aft agley” (agley meaning awry), and that has proven true this year.

An unusually warm March sent icy streams of melted snow cascading into the upper Dolores way ahead of the usual time. With the reservoir fast approaching capacity, managers had no choice but to open the gates early.

Ken Curtis, engineer with the DWCD, says 2017 is similar to 2008 in many ways but the release has started about a week earlier. “We actually started 2008 on April 1, so this one isn’t too far ahead,” Curtis said.

Managers had thought the spill might not launch until mid-April, but that was not to be, given “the unexpected and unusual warming in March,” Curtis said. “No one could fully anticipate it, so it was slightly surprising.”

Fey said the earlier release will definitely affect the number of boaters visiting the river, as many try to arrange their stints on the river for late May, when it’s warmer and they can get vacation time.

“I’m getting calls and emails from people asking, ‘What happened?’”

But the spill will continue for weeks, providing time for many boaters to take advantage of the rare opportunity.

“I think the duration is going to be similar to 2008,” Curtis said, “except in 2008 we accentuated the length and did a lot of days at 800 cubic feet per second,” considered a minimum boatable flow. “This year we’re going right to 1200 cfs or the first week or so and we still intend to go to 2,000 for a much longer duration.”

The change in the flow regime was requested by boaters, Fey said.

“Historically we’ve all heard that if we have a spill, we can lengthen the season by releasing the minimal flow, which has been 800 cfs in the past but we know it needs to be a little higher today – but that doesn’t give us the range of experiences people really look for on the river.”

At 800 cfs, a typical rafter will float the river once but may not try it for a second or third time, said Fey, who hopes to be able to raft the Dolores in three separate trips this season. “The river changes dramatically with a range of flows.” Lower flows are more technical, he said, because there are more obstructions, while faster flows may be challenging in certain places but do allow boaters to float over many rocks.

This year, there are expected to be several days of peak flows as high as 4,000 cfs. Those higher flows will shorten the spill somewhat, but in addition to offering variety to boaters, they provide a number of potential ecological benefits.

The magnitude of the peaks is expected to help scour silt from cobbles used by native fish for spawning and from pools where they congregate during low-flow periods.

The pulse of rushing water is also expected to inundate the floodplain, encouraging the growth of native plants, and help clean willow and other brush from the river channel itself. In 2016, boaters decried the way that vegetation was choking the waterway, saying it scarcely resembled a river corridor after five years since the last spill in 2011.

The rafting community supports the release of high flows to aid the environment, Fey said.

“We hear this concern about native fish and potential listing of warm-water species and I think it’s important the recreational paddling community has sat up and said we are willing to shorten the duration of the season to provide those environmental flows. We are very supportive of restoring the kind of habitat down there, both environmental and recreational, that makes that river trip unique.”

The 2017 spill is expected to end some time in June, but precisely when is not known.

“With the early start, we’re afraid it will end a bit earlier in June,” Curtis said. “2008 almost went to the end of June, but there is still a lot of volume to the snowpack and we’re getting more snow today and there’s still snow on the ground. We expect to go through the bulk of April and May.”

With the area often in drought, reservoir managers have traditionally been extremely cautious about utilizing water for recreational spills, trying to ensure whenever possible that there will be supplies to meet all the allocations for the Dolores Project’s many users and have carryover for the next year.

But the carryover was not much needed this time because of the ample snowpack, creating the conditions for the early release, Fey noted.

“We had such great carryover storage in the reservoir, almost making next season a certainty, and combined with the ridiculously warm March, the unintended consequence was that the reservoir has no room to fill,” Fey said.

“In 2008 we had more space in the reservoir,” Curtis agreed. “The carryover this year, combined with that early melt-off, just initiated the spill a little earlier.”

With climate change advancing rapidly, it’s possibly there will continue to be early runoffs, but Curtis said so far there is no such trend in evidence.

“We haven’t established a long pattern of that early warming,” Curtis said. “In the 10-year record I’ve seen laid out, this is by far the earliest [snowmelt]. The Silverton, Colorado, snow and avalanche center tracked their 10 years of records and, no, it’s not a specific trend but they’re still looking at the data.

“Whether this is a forewarning of a future trend, I don’t know.”

Fey likewise said it’s unclear whether there will be many more springs with such early runoff. “It was a record-breaking March, but with the recent cold fronts and storms, I’m hoping the runoff will taper off a bit. Who knows? It caught everybody off guard. I don’t know if this is a new normal, but if so, we’ll have to adjust.”