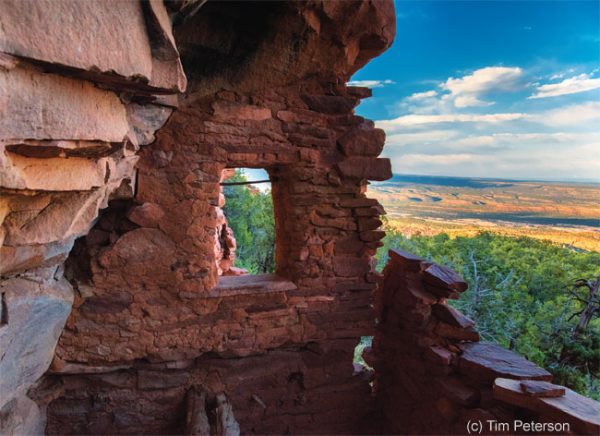 In an effort to shore up support for legislation that would codify President Trump’s changes to Bears Ears National Monument, Utah Congressman John Curtis accepted an invitation from Navajo Chapter presidents to meet with them at the Mexican Water chapter house in mid-February.

The freshman congressman hoped to hear suggestions from the Navajo leaders in his Utah district that could prompt changes to the Shash Jáa National Monument and Indian Creek National Monument Act, House Bill 4532, to strengthen its chances of passing.

The region, known for its vast archaeological and Native American cultural patrimony, is a living traditional resource for medicinal herbs and sacred ceremonies for the Zuni, Hopi, Ute Mountain Ute, Navajo and the Uintah Ute tribes. The five formally organized as the Bear Ears Coalition to negotiate with the Obama administration for the declaration of the monument.

Fears are that the passage of a bill allowing such a reversal of a presidential monument declaration would spur flip-flopping between presidents in the future and therefore engender distrust among communities, or, in this case, sovereign tribal governments negotiating with the federal government for protection of areas under the Antiquities Act.

At the Mexican Water meeting, Curtis explained that the bill landed in his lap, right after he was elected to replace Jason Chaffetz, who retired late last year. He was glad to meet with the Navajo leaders, he said.

Mexican Water Chapter President Kenneth Maryboy welcomed him, “During all the years that we have elected Utah representatives to the House, you are the first congressman to come to Mexican Water,” he said.

Curtis explained the bill, pointing first to the Native co-management issue. The Bears Ears commission, described in the Obama declaration, consists of one elected official each from the five tribes, appointed by the tribes and reporting to the Interior Department’s Bears Ears Management team. Although the advisory commission was not a decision- making board, it was established to provide substantive guidance for the development and implementation of a comprehensive management plan.

All of Obama’s Bears Ears Commission stays intact under his bill, Curtis said, except the commission will now report to the Shash Jáa Management Council.

“H.B. 4532 preserves 100 percent of the Bears Ears Commission as it was defined in Obama’s declaration. It will stay in place,” he said. “It will advise the additional Shash Jáa Tribal Management Council included in the bill. The additional seven members of the management council will represent tribal points of view.”

In a recent Salt Lake Tribune op-ed piece, Curtis wrote, “Obama wanted to give tribes meaningful co-management of [BENM], his executive authority under the Antiquities Act was limited – because these are federally owned lands – and to achieve this worthy objective would require an act of Congress… Where the Bears Ears Commission gives the Native American tribes an opportunity to play an advisory role, my bill creates the first ever tribally co-managed national monument in history.”

But instead of having the representatives elected by the tribes, the Curtis bill states that appointment to the Shash Jáa Management Council will be made by the U.S. president, with Utah congressional delegation approval. The seven members include one from the Department of the Interior or Agriculture, three from the Navajo Nation (one representing Aneth Chapter), one member of the White Mesa Ute or the Ute Mountain Ute Tribe, and two San Juan County commissioners.

Attorney General Branch discounted the plan as an effort by the Utah government and the U.S. President to circumvent the sovereign authority of the tribes.

“Our voice is filtered through the state and local government in this management model. The bill adds insult to injury. We decide for ourselves who represents us,” she told Curtis.

Nez emphasized that the Navajo Nation is commemorating the 150th anniversary of the Treaty of 1868, which established the Navajo tribe as a sovereign nation entitled to government to government relations. “Native people have always honored their treaties, yet tribal nations often remind their federal counterparts to live up to their obligations,” he said.

No public hearings were held in this county with respect to Trump’s decision, Branch added. “We were given only one hour with Zinke when he visited the monument area in 2017, while the county spent four days with him. This bill is flawed,” she said. “You are the lead sponsor. You need to withdraw the bill and meet with us and take the tribes into consideration.”

In a statement, the Southern Utah Wilderness Society wrote, “The Curtis Bill hands over management for the two mini-monuments to separate ‘management councils’ that must include local officials. Two spots [will be] filled by local county commissioners – commissioners who actively oppose the protection of Bears Ears. The tribal members on the commission would be chosen in consultation with the Utah Congressional delegation, but not tribal governments, thereby undermining tribal sovereignty and diluting tribal input. The bill specifically excludes representation from the Hopi, Zuni and Ute Indian Tribe. Curtis argues that this hand-picked ‘local control’ is a good thing. His claim that it provides for Tribal management is false.”

“If I get off the train, the train keeps moving forward,” Curtis countered. He said the tribes have three options.

“The first is to wait until a new president is elected and overturns Trump’s action. Or you can wait for the suit to be settled, which is a long pass, and maybe a decade of uncertainty, or you can offer suggestions that will move this bill through Congress.”

He cited expanded resource protection in his bill, which provides for 18 additional law-enforcement personnel to protect the monuments and the surrounding Bears Ears area. “Currently that land is protected by only two federal officers,” said Curtis.

As did the Obama declaration, the Curtis bill prohibits new resource extraction claims in the original 1.35 million acres of Bears Ears National Monument.

Navajo President Russell Begaye testified against the bill before the House Natural Resources Committee on Jan. 30 at the request of Democratic committee members who noted the absence of tribes at a Jan. 7 hearing on the bill.

Begaye reiterated his comments at the Mexican Water meeting, alleging that his tribe was never consulted about the Curtis proposal. In addition, he said the title, “Shash Jáa, the Navajo language for Bears Ears, is misleading. The tribe was never consulted about the use of the words in the name. It was suggested by someone who does not represent the tribe. It implies that the Navajo Nation supports this bill. We do not. Far from empowering tribes, it would put local politicians and hand-picked Native Americans in charge. The management in this bill is tribal in name only.”

Wesley Jones, Aneth Chapter president, thanked Curtis for coming. His chapter is home to the most vocal Navajo opposition to Bears Ears. “It is hopeful,” he said, “maybe the congressman would come to all the chapters to learn about our needs, who we are. We are glad you are here. We invite you to come back because we want an equitable opportunity to be part of the county and state.” But he made it clear in his closing remarks that he wants Curtis to drop his bill.

Jones’ chapter did not respond to a poll late last year when Utah chapters held meetings where each member was given the opportunity to vote on the Bears Ears issue.

“All seven chapters were asked to participate over several months to measure support for Bears Ears,” said Council Delegate Davis Filfred, who represents five of the Utah chapters, including Aneth. Filfred said the poll found three people opposed to the new national monument, while 12 abstained. “Aneth Chapter did not respond. Totals of the other six chapters revealed that 98 percent of the Utah Navajo residents support the existing protections for Bears Ears as it was declared by the Obama administration.”

Aneth Chapter officials reportedly declined to allow the vote to proceed in October 2017.

Leaders described the development of Bears Ears, claiming a lack of cooperation from the county and the Utah congressional delegation when Utah Diné Bikeyah submitted proposals to the Utah Public Lands Initiative in 2011.

“This is hard for me to understand,” said Curtis. “I would like to work with you to understand where the breakdown is.”

“The Navajo Nation has passed multiple legislations supporting Bears Ears National Monument and opposing the Curtis Bill,” Filfred added. “Consultation [with the Navajo government] on your bill never happened. Your bill eliminates the other tribes that live outside the state, after the work of Utah Diné Bikeyah brought us together. We are all opposing your bill and want you to withdraw it.”

“I am resistant to withdrawing,” Curtis replied. “What do you want me to change?”

“Bears Ears provided protection for our people during the Long Walk,” Begaye said. “Many families hid there. There are more than 100,000 archeological, ancestral sites and only 10 percent of them have been recorded properly. We asked that 1.9 million acres of land be protected in the Bears Ears National monument. We settled for 1.3.

“We want to keep the existing Bears Ears National Monument. We want to advise, not answer to somebody. We do not want the state or the president appointing our members. We want to select our management team members.”

Branch advised the congressman to reach out to the Navajo Nation and chapter leadership. “You are driving the train and you can control the direction it takes. We want you to withdraw your bill.”

But when an audience member asked the congressman if he would withdraw his bill, Curtis replied, “You aren’t listening to me. If I withdraw the bill someone else will move it forward.”

The Free Press reached out to the congressman’s Washington, D.C., office requesting comment on the progress of the bill and any changes that might result from the meeting with the Navajo leaders. Curtis’s PIO, Katie Thompson, said the congressman will wait until after the recess to comment.