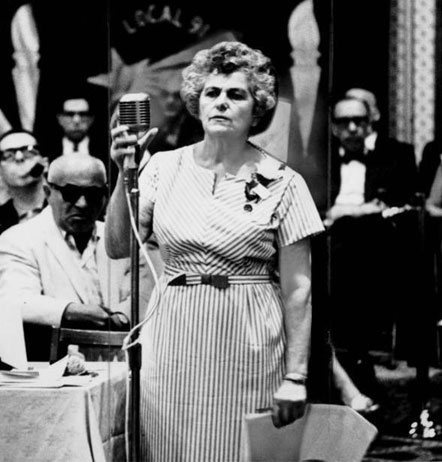 While the Great Depression of the 1930s had a huge impact on pretty much everyone, the workers in the U.S. were particularly affected by the devastating loss of jobs and economic deterioration. The women of their period were particularly hard hit. In 1933 there were almost 2 million women who were unemployed. Married women were discriminated against more than other women, and wages plummeted. Some women who were lucky enough to still hold jobs made less than $5 a week and workplace conditions were inhumane in many cases. In the garment industry it became particularly horrific and sweatshops became the norm.

There were a few women during this era who stepped up and became activists to fight for women, better wages, the elimination of sweatshops and the formation of unions. One of those brave women was Rosa Perotta.

Rosa was born on Nov. 10, 1896, in the Russian Ukraine. When she was 17, she followed her older sister, Esther, to America to avoid an arranged marriage. Once in New York, she soon found work in a Manhattan shirtwaist factory and joined the International Ladies Garment Workers Union (ILGWU), Local 25. It was one of the most powerful unions of the era.

The union soon recognized Rose’s organizational abilities and enlisted her to organize the women garment workers. In 1915 she helped to set up an education department within the union and was soon elected to Local 25’s executive board. In 1933 she traveled to Los Angeles to organize for the union. Los Angeles was a traditionally anti-union city. She was persuasive, though, and met with great success, which ultimately resulted in her election as vice president of the ILGWU. This young anarchist was often sent to many fierce, antiunion factories and was the only paid woman organizer in the male-dominated union. She had to fight to get her voice heard within her union as well as outside. She was deeply committed to women in the workplace and that made her an outsider of sorts, which was something she had to deal with constantly during her career. Questioning male author ity within the union also eventuated in her being labeled as a “troublemaker.” It was completely socially unacceptable for women to be outspoken, leaders, or hold positions of leadership. Yet Rosa did all three.

She was the only “woman organizer” helping at the United Auto Workers strike in Flint, Mich., and at the Akron rubber workers strike in the late 1930s. It was her job to raise the morale of the strikers by working with the wives, daughters, and sisters. She often spoke at meetings of the strikers and led them in union songs. She also filmed the strikes with her movie camera, and the workers were eager to pose for her, thus increasing her familiarity with the strikers. Rosa played an important role in the Flint sit-down strike. She was involved in the negotiations and diligently supported the strikers. During this strike, thugs attacked and beat her, causing a lifelong hearing impairment. When the strike was finally settled, she was one of the CIO and UAW leaders who led the workers out.

In many cases women had subservient and powerless roles in the 1930s. Pesotta dared to step out of the role society gave her. She is one of the few women who made it past the bastions of male power in the 1930s and tried to instill her own brand of feminism into the labor movement. I think she met with some great successes. In 1944, she made the decision not to run for a fourth term as union vice president and returned to her old shop as a sewingmachine operator. She also wrote and published two memoirs, Bread Upon the Waters, and Days of Our Lives.

Margaret “Midge” Kirk is a slightly eccentric artist, writer, bibliophile, feminist scholar and hobby historian who lives in the SW corner of Colorado.