A Chinese woman who carved a path

The fight is not over. Not for equality, not for justice and not for ending the patriarchy which is not only dangerous for women, but also for men. 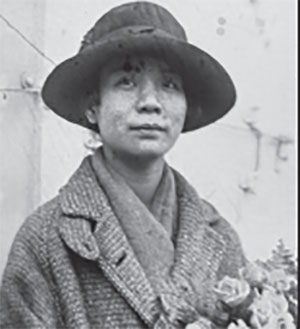 I disagree because I celebrate those women like Mabel Pig-Hua Lee, who fought the fight shoulder-to-shoulder with her sisters to win that right while she had a long wait before she could cast a ballot. How visionary and selfless! She fought for a right that she would not be granted until late in her lifetime. I celebrate her and the others who stood beside her regardless of race, color, sexual preference, religious affiliation or education.

Dr. Mabel Pig-Hua Lee was one of the rare Chinese women living in the United States early in the 20th century. Rare, because Congress passed very harsh laws that were designed to keep Chinese immigrants out of the United States. During the mid- 19th century, men from China were here to work in the mines and build railroads and bridges. There were many horrible stereotypes about the “Oriental” and they were fueled by the prevalent bias of the time.

Immigration laws cemented racist ideas regarding citizenship in the United States. Laws were passed to exclude Chinese from entering America, although the laws were primarily aimed at Chinese women, and when men were allowed in they were denied the right to naturalization. This was called the Exclusion Act. They were the only people in the world to whom this was denied.

Mabel Lee was born on Oct. 7, 1897, and arrived in the United States from Conton (now Guangzhou) China around 1900. The family took up residence in New York City, where her father was the Baptist minister at the Morningside Mission in Chinatown. Her parents, Lee Towe and Lee Lai Beck (Chinese use surnames first) were two of the very few exceptions to the Exclusion Act and were allowed into the U.S. because they were teachers in the employ of the Baptist Church.

The young Lee, an only child, was raised as a very modern woman. Both of her parents believed strongly in women’s rights and feminism. They refused to bind Mabel’s feet as was still the custom with Chinese families and they encouraged her education. She was sent to public schools in the city and was the only Chinese student in her graduating class. Because of the Exclusion Act they were an oddity and rare in the community and could not become citizens.

The Lee family kept in close contact with friends and family back in China and paid close attention to the events that were unfolding there. Many of the Chinese who were in the U.S. were supporters of the republican revolutionary, Dr. Sun Tat-sen, and shared the goal that he had to modernize China. The vision they held was strong on women’s rights, including equal education and political participation.

At the Mission, Mabel and her mother raised money for Chinese famine victims, worked with the YWCA, and participated in parades. The suffrage leaders were also following the news of the Chinese revolution and were in truth, a bit peeved that the women in China had won the vote before them! They also wanted to learn more about how it had been accomplished and asked local Chinese women to inform them.

Leading Chinese women in Portland, Oregon, Cincinnati, Ohio, Boston, Massachusetts and New York City were invited to speak at white suffrage meetings as early as the spring of 1912. The Chinese women were overjoyed to share news of how women were instrumental in the founding of their new nation in China. They spoke of the women’s brigade that fought side by side with the men, celebrating the enfranchisement of the Chinese woman. It was also a great opportunity for them to appeal to these women in their communities to help them address the needs of Chinese communities throughout the United States and to especially focus on the demeaning immigration laws that were in place. The hope was also that by working with the white community they could convince white Americans that the biased stereotypes about the Chinese people were wrong and that they should all work together to change things.

As Lee was working with these suffrage leaders, she was only 16 years old and still in high school but had already been accepted to Barnard College. She and her family believed that education was the key to not only women’s rights but the very strength of a nation. Mabel had made such an impression on suffrage leaders that they asked her to assist them in leading a parade they were planning. Of course, she agreed.

She made front-page news in papers across the country. On May 4, while astride a horse, she was not the only one in the parade advocating for suffrage. Her mother and all of her neighbors from Chinatown had joined in.

That fall, Lee began studies at Barnard but she also remained front and center in the discussion around women’s rights, both here and in China. In 1915 she was invited to give a speech at one of the suffrage meetings of the Women’s Political Union. Her speech, “The Submerged Half,” was published in the New York Times and it used the Chinese community to stand up and promote girls, education and the participation of women in civic and political arenas.

“Are we going to build a solid structure” by including women’s rights from the beginning? she asked her public. Not doing so would “leave every other beam loose for later readjustment,” as she had learned from her experiences in the American suffrage movement. She concluded, “the feministic movement” was not advocating for “privileges to women” but rather “the requirement of women to be worthy citizens and contribute their share to the steady progress of our country.”

In 1917, New York State enfranchised women but Lee was still not a citizen of the U.S. and was unable to vote. She was truly a feminist pioneer entering a Ph.D. program at Columbia University, a previously all-male institution, earning her doctoral degree in economics in 1921. She was the first Chinese woman to earn a Ph.D. from Columbia University.

Upon the death of her father, Mabel assumed the administration of his mission, which was later to become the First Chinese Baptist Church in New York. She continued to work with the community in Chinatown until her own death in 1965.

She was a woman who fought for equality of both sex and race, and taught white leaders about the global scope of the fight for women’s rights. In 2018, U.S. Congress approved legislation to rename the United States Post Office at 6 Doyers Street in China Town, New York City, in her honor.