We know her name, she has received some mainstream notice, but what do we really know about this dynamic woman? I decided I wanted to know more and did some research. 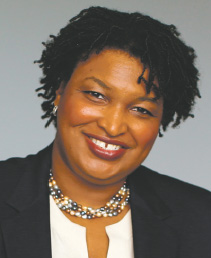 She is not only a political leader but an entrepreneur, New York Times bestselling author and a driving force in the world today. She served for 11 years in the Georgia House of Representatives, seven of those years as Democratic leader. In 2018 Abrams became the Democratic nominee for Governor in Georgia, where she won more votes than any other Democrat in the history of the state. She was the first black woman to become the gubernatorial nominee for a major party in the United States. She was the first black woman and the first Georgian to deliver a response to the State of the Union.

After witnessing the gross mismanagement of the 2018 election by the Secretary of State’s office, Abrams established Fair Fight to ensure that every American has a voice in our election system. She went on to establish many other organizations devoted to voting rights. In 2019, she launched Fair Count to ensure accuracy in the 2020 Census and the Southern Economic Advancement Project, which is a public policy initiative to broaden economic power and help build equity in the South.

Abrams is a lifetime member of the Council on Foreign relations serving on the Subcommittee on Diversity. She is a Next Generation Fellow of the American Assembly on U.S. Global Policy and the Future of International Institutions, serving as discussion leader, editor and essay contributor.

She was selected as Salzburg Seminar Fellow on East Asian Studies, an American Marshall Memorial Fellow, an American Council of Young Political Leaders Fellow, a Council on Italy Fellow, a British-American Project Fellow and a U.S. Russia Young Leaders Fellow. Abrams is the top-ranking Democrat in Georgia. She has traveled to and met with leaders in South Korea, Israel and Taiwan. Her international policy travel includes Australia, Austria, Belgium, Bulgaria, Canada, France, Israel, Italy, the Netherlands, South Korea, Switzerland, Taiwan and the U.K. She is a member of former Secretary of State John Kerry’s World War Zero, which is a bipartisan coalition on climate change. She has been a featured speaker at the Aspen Ministers Forum, the Kerry Initiative-Yale Jackson Institute of Global Affairs, the National Security Action Forum and the Council of Foreign Relations, as well as a contributor to Foreign Affairs Magazine.

Abrams is a recipient of the John F. Kennedy New Frontier Award and a current member of the Board of Directors for the Center for American Progress. Interestingly, she has penned eight award-winning romantic suspense novels under the pen name Selena Montgomery, in addition to Lead from the Outside, formerly Minority Leader, which is a guidebook on making real change, and co-produced an Amazon Prime documentary, “All In: the Fight for Democracy.”

Her most recent book is Our Time is Now.

Try watching this video on YouTube, or enable JavaScript if it is disabled in your browser. https:// www.youtube.com/ watch?v=jFSc8f0P9q8 This is some of what I learned about a beautiful woman, a force of nature and a tireless representative of the people.

Margaret “Midge” Kirk is a slightly eccentric artist, writer, bibliophile, feminist scholar and hobby historian who lives in the southwest corner of Colorado. She can be reached at eurydice4@yahoo.com or visit her website www.herstory-online.com.