A feast for music-lovers

Last year when the Clavier Trio performed at Carnegie Hall to a sold-out house, an usher came back stage during intermission and handed violinist Arkady Fomin a note. 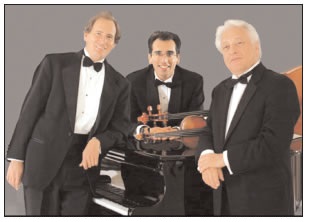 From left, David Korevaar, piano; Jesus Castro-Balbi, cello; Arkady Fomin, violin, make up the Clavier Trio, which will preform three concerts during the Music in the Mountains Festival this month in Durango and Pagosa Springs.

Fomin thought it was coming from an old friend.

Wrong! A critic for Strad magazine said he liked the concert, and that the Clavier deserved the applause it received — even if the accolades came in the wrong place.

Amid laughter, Clavier cellist Jesus Castro-Balbi explains, “We had a few people clapping between movements, which you’re not supposed to do.” Fomin didn’t care. “It was not only a good concert, it was a very good intermission because of this note.”

He, Castro- Balbi, and the Clavier’s third member, pianist David Korevaar, plan to bring both humor and musicianship to the Music in the Mountains Festival, a series of classical and world music concerts taking place in Durango and Pagosa Springs July 10 through Aug. 2.

Conductor Guillermo Figueroa will return for his second season with the 23-year-old festival. Figueroa is music director and conductor of the New Mexico Symphony in Albuquerque. This season, Figueroa will conduct six of the eight Festival Orchestra concerts. Music in the Mountains will also feature seven Chamber Music concerts, several benefit and gala events, pops and Celtic music, and more.

The Clavier Trio will offer two programs in a series of three concerts of what Korevaar considers their specialty: memorable programs.

Castro-Balbi describes Arensky’s work as lush with rich instrumental colors, and long singing lines. He believes it goes well with the Schubert trio: “One of (his) great later works.”

The cellist adds, “I think Arkady has a knack for putting together pieces in a nice combination.”

“[This] program is more than interesting,” exclaims Fomin. “It’s unique.”

The pieces all relate to night. “Verklaerte Nacht” depicts two lovers who wander down a darkened forest path.

Korevaar describes Schubert‘s “Notturno” as “a very beautiful and heartfelt piece. At the same time it has some very strong kind of military band sounds to it. It’s an interesting mix.”

The piece has an additional intriguing feature. “He masterfully inserted Lutheran hymns,” says Fomin, chuckling again. “In the middle of passionate spots, really exciting playful movements, suddenly there is a Lutheran hymn. I like it.”

Mendelssohn may have added the hymns as a tribute to Bach, or he may have been acknowledging his own background. His father and mother converted from Judaism to Christianity, then stressed religions tolerance to their children.

“This is a somewhat autobiographical piece, I think,” says Fomin.

Fomin started the Clavier Trio in 1997 at Conservatory Music in the Mountains, when he and two colleagues played chamber music together for recreation, and discovered they enjoyed working together.

“Different people [from Korevaar and Castro-Balbi],” he explains. “I was the same except a little younger.”

The ensemble performed in the inaugural Dallas Symphony Orchestra Chamber Music Series, served as trioin- residence at Fort Lewis College; and performed to critical acclaim at the Bargemusic Concert Series in the Weil Recital Hall at Carnegie Hall.

When the original pianist left the group, Fomin called upon Korevaar, whom he had known as a music student in the 1980s at Juilliard. “I would have then called him a budding musician then,” Fomin says.

“I hope I’ve bloomed by now,” Korevaar shoots back. Currently, he’s an associate professor of piano at the University of Colorado, and travels throughout the United States as a chamber musician and soloist.

Then the Clavier’s cellist left. Deciding he couldn’t hire another outof- towner, Arkady Fomin called Castro- Balbi, whom he heard play with the Dallas Symphony, and who he knew performed throughout the Americas and Europe.

“His first question was, ‘What happened to the previous cellist?’” Fomin says as Castro-Balbi begins to laugh.

Assured the former cellist left on good terms, Castro-Balbi agreed to audition for the Clavier.

Guffaws explode as Fomin adds that the Clavier in its present form has been together for five years.

“Our different backgrounds help us,” muses Fomin, who grew up in Latvia, came to the United States 35 years ago, and has played with Yefim Bronfman, Pinchas Zuckerman, and Nadja Salerno-Sonnenberg.

“We find a way to come together in music. Not only to make ourselves more [fulfilled] but to bring the joy of music to others.”