Despite confronting the bodies of four murdered young people at the start of Katayoun Medhat’s The Quality of Mercy, readers know they’re in for an enjoyable — if dark — ride by the end of the first chapter of Medhat’s debut, the latest entrant in the Navajoland mystery niche pioneered by Tony Hillerman.

The Quality of Mercy introduces cynical protagonist K, a police officer in the remote Southwest town of Milagro, an obvious stand-in for Cortez, Colo., near the sprawling Navajo Reservation. K, short for Franz Kafka, has landed in Milagro because of the opportunity it provides him to disappear from the wider world. K’s droll observations — of his fellow police officers, local citizens, and life in general — are as cutting as they are funny. 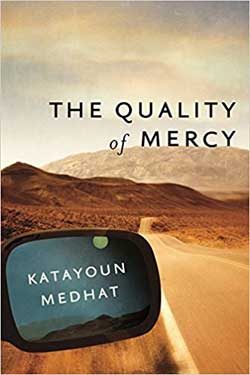 K teams with Navajo cop and expert tracker Robbie Begay to investigate the opening murder spree. As the two crisscross the reservation delving into the primary murder victim’s troubled past, they trade witticisms and insults in equal measure, making their conversation-filled drives across the high desert some of the book’s best passages. The mystery, which involves crystal meth dealers, New Age mysticism, and the ultimate unmasking of a close-to-home murderer, is wellcrafted but almost beside the point, so rich is the tapestry of characters Medhat has created.

Raised in Iran and Germany and a resident of England, Medhat is an unlikely Hillerman protégé. She wrote The Quality of Mercy after she developed a fascination with the Navajo Nation and Diné people during a stint researching mental health services on the reservation for her Ph.D. in medical anthropology. She says The Quality of Mercy is the “unplanned side-product” of her dissertation research among the Navajo people, and even includes a Navajo language glossary at the end of the book.

Medhat credits a creative writing course she took at Durango’s Fort Lewis College in southwest Colorado for sparking her interest in writing mysteries. The Quality of Mercy won the 2016 Leapfrog Writing Contest and was released last month by Leapfrog Press.

Medhat appeared at Maria’s Bookshop in Durango on Oct. 3 for a reading and signing of her Milagro Mystery series debut. She is at work on Lacandon Dreams, the second installment in the series featuring the wry K and brilliant Robbie Begay detective team.