A green light for the AMBER alert: A system will be implemented at last on the Navajo Nation 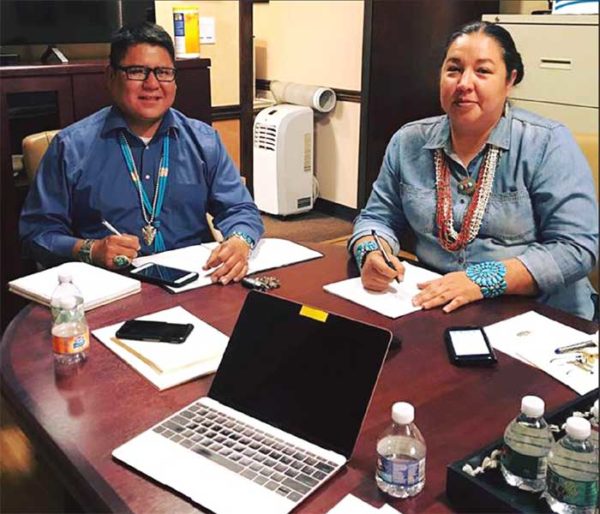 The Navajo Nation is set to implement an AMBER Alert system that will cover the 27,000-square-mile reservation in Arizona, New Mexico and Utah, making it possible for authorities to send immediate notice across Navajo Country for missing persons, abductions, emergencies and hazards.

Money for the estimated $850,000 project is coming from the Navajo Nation appropriations bill. Council Delegate Amber Kanazbah Crotty was the sponsor for the proposed funding.

“It is the 2017 issue closest to my heart,” said Crotty. “We pushed council for [Navajo] funding after holding our own internal [Navajo government] process accountable. I have no authority to complete the paperwork, or push the job along faster, but I could keep my constituents informed of the progress we were making and build community support to get the process completed,” she told the Free Press.

The nation will be one of only a handful of the 560 Native tribes with a system in place to issue child-abduction alerts from their own law-enforcement departments. Most must coordinate with surrounding state authorities and the National Center for Missing and Exploited Children to send word about abductions.

Without their own AMBER Alert system, tribal law enforcement faced multiple steps to alert state authorities surrounding the reservation in an emergency. The process can delay the time an alert could be posted and endanger the lives of victims.

Interest in developing the system has been in the works since 2007, when the U.S. Department of Justice awarded a $330,000 grant to the tribe. It was intended to fund a pilot project that would expand the AMBER Alert system into tribal land. In the years since, half of the Navajo grant funding was spent on equipment, such as tents and megaphones. The remaining half was not spent while the pilot project languished.

A wake-up call came in May 2016 when 11-year-old Ashylnne Mike was found dead a day after she was abducted by a stranger near Ship Rock, N.M., on the reservation. Navajo police followed all protocol in getting an alert issued but it didn’t show up on people’s cell phones until 2:30 the day after her abduction.

The delay raised the possibility that she could have been found alive if an alert had come soon. Navajo President Russell Begaye acknowledged the need for a more effective response system that uses modern technology.

Crotty was appointed chairperson of the SAP Subcommittee. It gave her the authority to keep the pressure on the Navajo government to develop the AMBER Alert system. “SAP requested several reports and updates from the Navajo Nation Department of Emergency Management and the Office of the President and Vice President regarding the implementation of the AMBER Alert system over the last year. We have been diligently tracking its progress since this issue was raised by Council in May 2016, and we will continue to do so until it is fully implemented,” she said. They hope to test the system in January 2018.

In December, President Begaye signed a contract with Everbridge, Inc., a company that provides mass-notification software that will be integrated with the Federal Emergency Management Agency’s Integrated Public Alert and Warning System on the Navajo Nation.

In January the SAP Subcommittee, law enforcement and lawmakers will present the project kickoff. “It will be an exciting day. We are using our own funds to protect our own people,” she said.

Crotty told the Free Press that issues around child safety, abduction, AMBER Alert systems, hazards, and emergencies, are closely linked with sexual assault and harassment, bullying, and even human trafficking on the reservation.

Well before the recent spate of sexual harassment charges ricocheting around celebrities, Crotty was speaking out in council chambers, where she is the only female among 24 delegates. She shoulders tough testimonies on behalf of programs such as Violence Against Native Women.

In a July council session she addressed the council, speaking out against the sexual harassment of female legislative staff by council delegates, and the intimidation and criticisms of the women in the council workplace.

She said the rates are compounded by issues such as colonization of the land and resources and women’s bodies are part of the violence. “We must educate leadership about the lateral oppression, how we mimic what has happened to us. Navajo-on-Navajo violence is our responsibility and our voice has the power to let colleagues know the truth about violence against women and the prevalence in Indian Country, shed light on the training needed for advocacy.”

More men are telling their stories, too, but, she said, “overwhelmingly our Navajo women and children are targeted. Every day I am notified of harassment in the workplace or of an assault in a Navajo community. Sexual assault and harassment has been normalized in Indian Country.”

Brown sponsored legislation that became law in July, criminalizing human trafficking on the Navajo Nation by a unanimous vote. The law defines trafficking as “the illegal recruitment, transportation, transfer, harboring or receipt of a person, especially one from another country, with the intent to hold the person captive or exploit the person for labor, services or body parts.” Such offenses include forcing people into prostitution or marriage, slavery, sweat-shop labor or the harvesting of organs from unwilling donors.

The law calls for cooperation among government and civil institutions to define, prevent and combat the illegal “transporting, trading or dealing” of people.

It is the first law on the Navajo Nation to address human trafficking, Crotty said. It adds a specific, sex-related crime to the criminal code, allowing officers to make arrests.

Brown, who is also a member of the SAP Subcommittee, has testified with her at federal and state hearings on human trafficking and sexual assault on Native people.

The work of the SAP Subcommittee is just beginning, she said. It’s time to raise awareness now that the legislation has become law.

SAP Subcommittee members are often called upon to testify in state and federal hearings on sexual violence and harassment against women, and concerns such as dwindling funding for domestic-violence shelters, victims’ advocate training, prosecutors and datasharing.

“Last year I waited 13 hours to speak at the U.S. Department of Justice and then was only allowed five minutes,” Crotty said in a post to her nearly 6,500 followers on Facebook. “This year we provided more than thirty minutes of high level testimony.”