Elia Wilkinson Peattie was born in Kalamazoo, Mich., in 1862. She grew up in a home without books and had to drop out of school at age 13 to help her father in his job-printing office, then at 15 go home to assist her mother with the children and housework. When she was very young her family relocated to the outskirts of Chicago, where her father built their new house by hand. 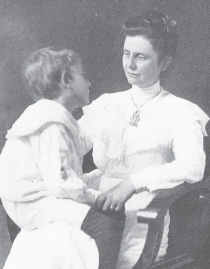 In 1883 she married Robert Peattie, a reporter for the Chicago Times. The couple had much in common and they spent their evenings sitting together writing stories which supplemented Robert’s meager income as a newspaper reporter. Despite her lack of formal education she was deeply driven to write and publish.

In 1886 the Chicago Tribune enlisted Ella to write for them and asked that she report for the Art and Society pages as a regular. Her great talent had begun to shine and she was the first woman reporter for the Tribune and the second “girl” reporter in Chicago. She was making a name for herself.

In 1888 the family, along with Elia’s sister and Robert’s mother, moved to Omaha, Neb., where Robert had accepted the position of managing editor of George L. Miller’s Omaha Daily Herald. This was in part because it was stipulated that Elia would also be hired as staff correspondent with the promise of bylined articles. When the paper merged with another, it became the World Herald. Robert remained managing editor and Elia worked as a columnist and editorial writer.

In 1890 Elia was given an assignment that was one of the most sought-after assignments on a newspaper: her own column. Through this vehicle she made her voice heard, penning over 800 columns.

As one of the first Plains women to publish an editorial column in a major newspaper she addressed public issues. Her remarks were often irreverent and revealed a side of the frontier often overlooked. She frequently made front-page news not only in Omaha but around the world.

Her voice became stronger as she grew in self-confidence, experience and maturity. She was very outspoken on controversial issues of the time, such as the Wounded Knee Massacre, capital punishment, prostitution, lynching, the Omaha stockyards, beet field workers in Grand Island, schools and child-rearing, as well as the dire need for orphanages, shelters for unwed mothers and charity hospitals. Her views were almost always controversial and were criticized by the upper class. Elia always maintained a great sense of humor and witty sarcasm about human nature.

From 1901 to 1917 Elia was the literary critic for the Chicago Tribune. She said the work was tedious and took precious time away from her other writing, but it did support the family. Her husband was often ill, which limited the amount he could contribute to the family income.

Placing a high value on education, perhaps because she had forfeited such due to poverty, she strove to improve her family’s lot in order to pay for a good education for her children. At one time she wrote 100 short stories in 100 days in order to pay for much-needed renovations in their home. During her lifetime she published 32 books.

She was active in numerous women’s clubs and gave well-attended lectures at Jane Addams’ Hull House. At that time in history women authors were denied membership in the prestigious, all-male Cliff Dwellers Club. She founded Cordon Club in order for women’s voices to be heard. She held fabulous and well-known gatherings on Sunday for writers and they became one of the central gathering places for Chicago’s literary set. She was a catalyst for social change and a very successful role model for promoting personal and professional independence for women.

Elia Peattie stood at the door of the Progressive Era and held it open for a new generation of women who would continue to seek careers, gain universal suffrage for women, promote birth control, and fight vice, filth, corruption, ugliness, ignorance, and exploitation. Her intellectual background, her use of irony and humor, her ability to employ various genres and literary approaches, and her undaunted “impertinence” produced a strong voice on the Great Plains.

Elia and Robert had four children, Edward, Barbara, Roderick and Donald. Barbara was married and had a family and was also a poet who died young. Roderick became a professor of geology and long-time faculty member at Ohio State, authoring a number of books on geography. Donald became a world-renowned author and naturalist. Edward was a successful New York businessman. Donald’s sons carry on the Peattie writing tradition; Noel was a poet and librarian at the University of California-Davis, and Mark is a renowned author of a number of books on modern Japanese history.

Margaret “Midge” Kirk is a hobby historian who lives in the SW corner of Colorado. She can be reached at eurydice4@yahoo.com or visit her website www.herstory-online.com.