A life’s work: Feela’s poetry book is ‘an atlas of where I’ve been’

To Montezuma County writer David Feela, poetry bursts with emotion — the kind that explodes from the heart and imagination.

“Prose is beer. Poetry is whiskey,” he says. Feela has just brought out his first full-length book of poetry, ‘The Home Atlas,” a print-on-demand volume published by Word Tech Editions. 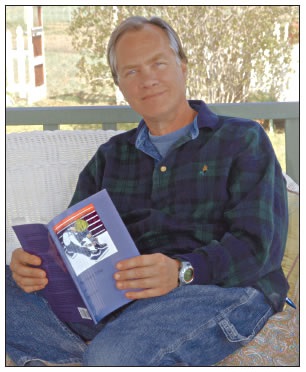 “It’s 72 pages long and took 35 years to write,” he explains. “I mean, there are poems in there from when I was still in college, all the way to recent times. It’s truly an atlas of where I’ve been.”

He’s been all over. “The Home Atlas” explores compass points from the esoteric to the humorous.

Asked to select a poem to discuss, he chooses “A Marriage Counselor Discusses Adam & Eve,” calling it a genesis for the book, and a modern understanding of the Bible.

Her initial complaint
was based on a lack of choice,
a resentment she harbored
until the day she died.
Adam, after all, was
the only available man.
She took him for better
but felt she got all the worse.
He didn’t share her grievance.
In fact, he couldn’t believe his luck.
He awoke from a nap
to find his first woman
naked and toting lunch.
Naturally, Adam wasn’t perfect
but he went on and on
about the snake,
as if Eve was the cold-blooded one.
And truth be told,
Eve liked the snake,
maybe even better than Adam.
Thought it at least understood
how to have a conversation.
In the end, of course, it was
a beginning.
The two reconciled, had kids,
went into business together:
Paradise Tours.
All their customers wanted to buy
a few acres and build
but in Eden the covenants were explicit:
no people.

Unusual points of view and quirky images fill many of the other poems in ‘The Home Atlas.” Take “Lifeboats” on pages 45 and 46.

I’ve been thinking about being rescued
from my life, relying on someone else
to figure out what I need.
I’d be willing to wait a while longer – if I have to –
for the right kind of person
but he or she had better be
quicker than the last fifteen years.
I’ve also been thinking about staying put
so someone can find me,
like the survival books recommend,
not wandering in circles
only to find myself back where I started.
I’d build a fire
if I had some matches,
maybe do some light reading
until the night grew too dark to see.
By the time the stars made an appearance
I’d hope the one I’ve been counting on
will have noticed the smoke,
wrapped me in a blanket
and helped me to a clearing
where my future will be anchored
like a cruise ship
with a buffet that’s always open
and a horizon full of ocean
to suggest a backdrop of adversity.

“There is that sense of sometimes you have so much going on in your life that you wish someone else would take care of it,” he muses.

Not only that. Who would thing of a lifeboat as rescuing a person from life?

Feela thinks his word connections arrive from his perceptions of situations as well as from their reality. “There has to be something of truth . . . so people can shake their head and say, ‘Yeah, that’s exactly what it is.’”

Geography helps define that truth: The Minnesota farm where he grew up, St. Cloud State University where he got his education, and Southwest Colorado, where he spent the last 27 years teaching at Montezuma-Cortez High School.

In the verse “1965,” he recalls how he felt as a child sitting at Sunday dinner. The adults talked. He listened — and thought.

On racial tension my father said,
“You don’t put a cow
in the same stall with a horse “
The table smiled and nodded,
took a warm-up in its coffee cup,
dug into a deep bowl of ice cream
and said, “Yup,
sure is going to be
a hot one this summer.”
I sat listening—maybe twelve—
at the edge of myself,
staring at their hands
like they were scoops of trouble:
one with liver spots
the size of sugar babies,
one with chewed nails,
fingers of ringed gold;
another with knuckles cobbled
like a handful of dice,
white as ivory.
Silver spoons clattered
against china bowls
and I was afraid to move
for fear they would notice
the unwashed part of me
out of the shallow part
of those deep bifocals, turn on me,
and pull me from my chair.
I glanced at my hands hanging limp
as evening primrose blossoms
before the cool night comes on,
and I knew these hands didn’t belong,
not here. I saw how the raspberries
left a streak of blood in every bowl,
how nothing that was white
would stay just white anymore

Feela does his best writing in the morning, before the day’s distractions start. He does not set out to develop a poem, an image, or a connection, but jots down ideas, then plays with what he’s written, as if he were doing a puzzle. “Suddenly when you see a solution, you see your mind lean toward what the answer is.”

He admits that many failed poems inhabit a box in his barn. “You’ve got to go through the stupid ones to get to the good ones.”

Instinct tells him when he’s written something good. So does his wife, Pam Smith. She’s his “front line” editor, whose judgment he trusts completely.