For the first time, the Cortez City Council has passed a proclamation declaring June as LGBTQ2S+ Pride Month.

The acronym stands for lesbian, gay, bi­sexual, transgender, queer or questioning, two-spirit and any other possible sexual ori­entations and gender identities.

The idea of June as Pride Month report­edly stemmed from riots on June 28, 1969, that broke out following police raids on the Stonewall Inn, a gay club in Greenwich Vil­lage in New York City. Although different governmental entities have recognized Pride Month for years – President Clinton offi­cially declared it in 1999 – this is the first time Cortez has formally supported such a designation.

The Town of Mancos has also passed a proclamation designating Pride Month.

The proclamations’ passage comes 20 years after a 16-year-old Navajo who was gay or transgendered, Fred Martinez, Jr., was murdered in Cortez. The brutal crime drew national attention to the area, although the district attorney at the time resisted the idea of calling the murder a hate crime.

Aspen Emmett, who was one of the re­porters covering the story for what was then the Cortez Sentinel, wrote an article for the Four Corners Free Press in June 2011, the 10-year anniversary, describing the events. “The day the authorities released Fred’s name, I went directly to the high school with a year­book in hand, on a mission to find out who Fred was,” Emmett wrote. 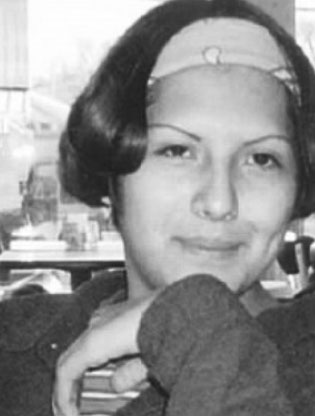 Fred Martinez, Jr., a teenage Navajo who was “two-spirited,” was murdered in Cortez 20 years ago this month, on June 16, 2001. The man who committed the crime bragged to friends that he had “bug-smashed” a homosexual. File photo

“A group of girls gathered on the steps of the school at lunch provided me with my first glimpse into Fred’s world. Without hesi­tation, they told me that Fred was ‘different’ because he carried a purse, tweezed his eye­brows and wore makeup on a daily basis.

“They were quick to say that he’d been made fun of at school, and was the butt of many jokes. His sexuality made him stand out, and his differences made him an easy target for bullying, or worse.”

After Emmett’s reporting on the students’ comments, “The District Attorney’s office issued only a brief statement that it wasn’t appropriate to speculate on whether Fred’s sexual­ity was a motive for the murder because ‘all crimes were hate crimes’.” Emmett wrote in the Free Press.

“However, the Associ­ated Press picked up the story, moving his sexual orientation to the forefront and thrusting the small-town murder case into the national spotlight.”

Eventually a Farmington man, Shaun Murphy, was arrested for the crime after evidence emerged that he had bragged to his friends about “bug-smashing” a gay man. He pleaded guilty to second-degree murder and was sentenced to 40 years in prison. In 2019, Murphy, then 36, was pa­roled to northeast Colorado after serving 17 years of his sentence,

A documentary about Martinez’s life and death called Two Spirits was re­leased in 2009. It showed that Martinez, reportedly a gentle soul, was bullied be­cause of his non-traditional behavior. He considered himself nadleeh, a Navajo word meaning a person with both male and female traits. In previous times, two-spirited people were embraced in Native American cultures.

Two Spirits was widely viewed, including by members of President Obama’s adminis­tration, and won numerous awards.

The Cortez City Council passed the proc­lamation about Pride Month 5-0 on May 25. (One of the seven council members recently resigned, and Orly Lucero was absent.) Prior to the vote, during citizen comment, the council heard from four people supporting the proclamation and two opposed to it.

“This past year has been full of a lot of hateful rhetoric, bullying and even some threats made to LGBTQ people and their allies,” said Matt Keefauver of Cortez, a for­mer council member. “I believe that signing the proclamation should be seen as poten­tially the first step in healing a divided com­munity.”

“This proclamation is suicide prevention for our community members,” said Raleigh Marmorstein of Road 21. “This proclama­tion means we all matter here.”

“Discrimination has no place here or any­where else. Love is love,” said Rebecca Busic of Dolores.

But Sherry Simmons of Lewis urged the council not to support the measure. “To celebrate something like this is very hurt­ful to Christians,” she said, continuing that “to suggest a community celebrate or be proud of a lifestyle which God condemns is shameful.”

She indicated there are already enough pride months. “We already have Black His­tory Month, we have Asian Month, stop that. We are all humans and all made in the image of God,” she said.

Simmons also referenced the destruc­tion of two cities as described in the Bible. “Sodom and Gomorrah were two cities well known for their homosexual practices. God destroyed them both,” she said. “Don’t hang this label on Cortez.”

Tiffany Ghere of Cortez, speaking via Zoom, said she supported Simmons’ stance. “I have a first cousin that identifies as gay and the only male able to carry on our fam­ily name and that is not a choice he chose to make… I don’t care if a person is het­erosexual, bisexual, or gay, but what I see is division coming for this decision.”

Ghere said if there is to be an LGBTQ Pride Month, there should be one for het­erosexuals. “If this proclamation is signed, will the city council now sign a proclama­tion for Heterosexual Recognition Month?” she asked, adding, “You need to have a het­erosexual month, a Christian month – how many months in the year do we have?”

But Jim Skvorc of Cortez, a former high-school history teacher, quoted Martin Niemöller, a Lutheran pastor in Germany who was interned in the Dachau concentra­tion camp during World War II until it was liberated by American forces.

“First they came for the socialists and I did not speak out, for I was not a social­ist,” Skvorc read from one of Niemöller’s speeches.

“Then they came for the physically and mentally deficient, and I did not speak out, for I was neither.

“Then they came for the homosexuals, and I did not speak out, for I was not ho­mosexual. . . .

“Then they came for the clergy, which was me, and there was no one left to speak for me.”

Skvorc concluded, “I appreciate you pass­ing this tonight and speaking out for people there was no one else to speak out for.”

Mayor Mike Lavey told the Four Corners Free Press that the language in the lengthy proclamation – which includes a comment that the city “lies on unceded Ute and Pueb­lo land” as well as a reference to Martinez’s murder – was the result of a group effort. “One of the other council members con­ferred with some of the people who were affected – gays, LGBTQ people,” he said. “The language was given to me.”

He said that in addition to the comments at the meeting, the council received around 50 emails about the proclamation. The emails ran about 4 or 5 to 1 in favor of its passage, he said.

Lavey told the Free Press that although this was the first time the city had passed an LGBTQ2S+ Pride Month designation, “It won’t be the last.”