A Navajo woman who fought for voting rights

I am not free while any woman is unfree, even when her shackles are very different from my own. — Audre Lorde

Agnes Laughter is a traditional Navajo woman and a heroine who fought for her rights. She was born in a hogan in Arizona in 1932. The family had no running water or electricity and lived about 50 miles northwest of Canyon de Chelly. 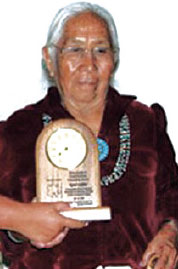 When she was 16, in 1948, Native Americans were given the right to vote in Arizona. That phrase, “given the right” really irks me. They had the right! They had been oppressed and not granted their “rights.” But, what’s new!

In 1970 Agnes was 38 years old, living a traditional lifestyle of herding sheep in Chilchinbetwo. Arizona had banned the literacy test that had been required in order to vote. In 1976, Arizona law allowed voters to have someone help them when voting. Alice only spoke Navajo, and used her thumbprint as her form of identification when she first voted.

For over 30 years she exercised her hard-won “right” to vote. She was conscientious about it. However, in 2006, when she showed up at the polls she was denied a vote. Not only was she denied but she was humiliated. She had been unable to obtain any of the required forms of identification because she had no birth certificate, utility bills, property tax statements, driver’s license, bank statement, vehicle registration or insurance. Of course she had none of these, she was a traditional Navajo woman living a traditional lifestyle! She had been so embarrassed that she did not vote in the next election.

“ ‘You’re not welcome here because you don’t have the proper ID’,” Laughter recalled what the election official told her. “I was so humiliated. It was like I didn’t even exist. I raise my thumb today to tell you my thumbprint is who I will always be. Nobody can take that away from me.”

Native peoples have a long and disgusting history of disenfranchisement because of law and practice. This is just another example. The right to vote for Arizona’s first people has only recently been fully achieved and threats continue to the electoral franchise.

Native American voting rights and the need for vigilant protection for the right to vote continue. Voter suppression has been used to discourage or prevent Native people from voting in Arizona. Once Native people began voting, confusing redistricting and vote dilution were used to reduce the effectiveness of the Native vote.

After a few attempts she finally obtained an Arizona identification card. In 2008 she secured transportation and a friend drove her for over 12 hours in one day from her home to three different locations (yes, count them, three!) The authorities initially rejected her delayed Navajo birth certificate as proper identification. She finally got an ID.

She contested the entire Arizona voter identification requirements in litigation that was filed as part of a lawsuit. It was finally settled in 2008. The Department of Justice expanded the list of documents allowed as identification for Native Americans. A small victory for a tenacious woman.

She speaks only Navajo, didn’t attend school, but this beautiful soul fought and won her “rights”! She was awarded the Frank Harrison and Harry Austin Citizenship award in recognition for strengthening the voting rights of all Native Peoples in the state of Arizona.

Margaret “Midge” Kirk is a slightly eccentric artist, writer, bibliophile, feminist scholar and hobby historian who lives in the southwest corner of Colorado. She can be reached at eurydice4@yahoo.com or visit her website www.herstory-online.com.