Eight years after Fred Martinez’s brutal beating death in Cortez, filmmakers are preparing to release a documentary that pays tribute to his too-short life and places his gender identity within a cultural and historical context. 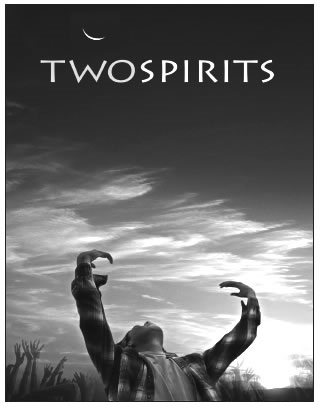 The movie poster for “Two Spirits” shows Fred Martinez very near the Cortez site where he was brutally murdered on June 16, 2001.

“Two Spirits: Sexuality, Gender, and the Murder of Fred Martinez,” tentatively slated for release on DVD in June, provides a rich and varied look at gender identity in Native American culture and its clash with the far more rigid European tradition that harshly judges sexual differences.

“As a director, I had to find a way to expand the story of Fred’s short life and murder to a second storyline that would follow the genocide, the forced loss of culture and other factors that have resulted in many tribal communities losing touch with their traditions around multiple genders,” said Lydia Nibley, who produced and wrote “Two Spirits” with her husband, author Russell Martin.

The project is seeking more outreach partners, especially in the Four Corners region, where Nibley expects “Two Spirits” to resonate with people all the more personally.

The film was seven years in the making and its producers are still raising funds to put the finishing touches on it.

“We’ve screened early cuts of ‘Two Spirits’ to get a sense of how different audiences respond and we often hear the comment that much of what people see in the film is totally new to them. That’s very exciting,” Nibley said.

The music in the film includes pieces by rock star and activist Patti Smith as well as by Native American artists who record with C anyon Records. Navajo composer Juantio Becenti of the Four Corners, who appears in the film, also wrote original music for the documentary. 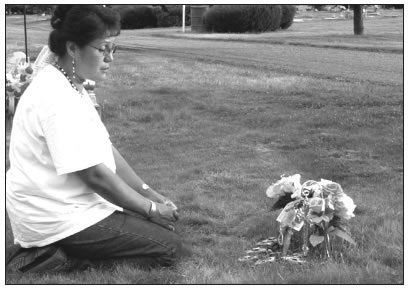 Martinez was 16 in June 2001, when he told his mother, Pauline “Paula” Mitchell, goodbye one night and headed off to the Ute Mountain Rodeo carnival. He never came home. Children discovered his badly beaten body five days later, on June 21, just feet away from where he once was photographed with his arms stretched high, face toward the sun.

The man who killed Martinez, Shaun Murphy of Farmington, N.M., coldly referred to crushing the teen’s skull as having “bug-smashed a hoto (slang for a homosexual).” Murphy is currently serving a 40-year prison sentence.

“Two Spirits” goes beyond chronicling the crime, however. It’s intended to raise awareness about hate crimes, as well as to highlight the past, when the Navajos honored two-spirited people.

“It’s come out really well,” said Cathy Renna, a Gay and Lesbian Alliance Against Defamation activist and filmproject participant. In the aftermath of Martinez’s murder, Renna came to Cortez to facilitate working with law enforcement and the media.

She said murders like Martinez’s are not as rare as some people might think, but his death had raised unique issues.

Fred Martinez in his feminine guise. Martinez considered himself “two-spirited” meaning he had both male and female traits.

“Do not automatically assume a girl is a female and a boy is a male,” transgendered Navajo scholar Wesley Thomas says in the film, while another interviewee states: “The place where two discriminations meet is a dangerous place to live.”

After Martinez’s death, the LGBT community felt it had to fight for justice, Renna says in the film, also pointing out gender-bias crimes are directed against an entire group of people, not just an individual.

Still, Nibley and Renna expressed hope that prejudice against transgendered people might be decreasing, in both society and the judicial system.

Just last month, a Greeley jury convicted Allen Andrade of murdering Angie Zapata, a transgendered woman. The case was tried as a hate crime. According to the Denver Post, Andrade’s defense suggested he’d become enraged upon discovering Zapata was biologically male. The prosecution argued Andrade had already known that, and that he said: “all gay things need to die.” Andrade is facing a life sentence.

Echoing Renna, Weld County District Attorney Kenneth Buck wrote in a Denver Post guest column: “Bias-motivated crimes are particularly heinous because they target an entire community of people, not just the actual victim. … (perpetrators’) actions are actually intended to intimidate a much wider circle and send a message that anyone who is different could be next.”

As for Cortez after the Martinez murder, Renna and Nibley said local and national media covered the crime and surrounding issues well, and helped raise awareness.

“As a result of Fred’s murder, the community faced the truth about the bullying that Fred and others like him experience, and local schools have adopted a gender-neutral dress code,” Nibley said. (Martinez was once sent to the principal’s office for wearing pink sparkly ballet flats — even though his mother noticed a girl at the school wearing identical shoes was not punished for it.)

“We heard a police officer say that he stops LGBT youth to inquire if they feel safe,” Nibley said.

“Gay friends told us they feel more visible and more respected in the community because of the solid reporting done by local papers and an increased awareness about LGBT issues and concerns in the Four Corners region.”

Nibley said the film’s primary theme was that nature provides a variety of people in the human family — “and that fundamental respect and dignity is a birthright.”

“ Two Spirits,” she said, calls for a return to traditional values.

“I like reclaiming that phrase from people who use it with a narrow, patriarchal and short view of history,” Nibley said. “There have been many cultures in North America that have held a respected place for people of multiple genders and we need to learn from those perspectives in the 21st century.”