Some theatre companies slate themselves to perform the usual plays or musicals at Christmas time: “A Christmas Carol,” “The Nutcracker,” all the traditionals. But the Durango Arts Center is grinning all the way with an original musical written and produced by Durango playwright Dinah Swan.

“Christmas Presence” is a family musical comedy set in Durango. A week before Christmas, a typical American family, the Truemans, are planning their typical holiday celebration when Betty, the mother, has her arm twisted into agreeing to host a family of foreign immigrants for a few days. 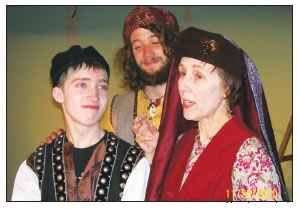 From left, Boone Brigsby, Garth Simpson, and Judy Hook rehearse a scene from the lighthearted musical comedy, “Christmas Presence,” at the Durango Arts Center. The original play will be preformed in December.

The immigrants turn out to be a huge, voluble family called the Udahvelatroikas, babbling in a mysterious Eastern European language and obliterating the Truemans’ traditions with their own. There are many comic clashes and misunderstandings.

This musical, featuring a cast of Durango actors, is stuffed full as a Christmas stocking with dancing, heart-warming music, stunning costumes, impressive acting, and even an inspired dose of the Christmas magic that came to life in our imaginations when we were kids.

Swan wrote “Christmas Presence” in 1997 when she was teaching at Fort Lewis College. “We were looking for something different,” said Swan, “we had done all the usual.” At the time it was a play with five songs.

Then in 2007 Swan’s husband was teaching at Oxford University and Swan had the opportunity to produce “Christmas Presence” for the second time.

“We had a lot of help with choreography and music this time, and it really helped the play expand into the musical it is today.”

For the third production of this musical Swan has a volunteer cast ranging in age from 11 to 70, and her husband Terry, the DAC’s board president, is the director. “This show is our gift to the DAC,” she said.

There will also be Sunday matinees Dec. 12 and 19 at 3 p.m. Tickets are available at the DAC, online and at the door before each performance; they are $10 for adults and $5 for children 12 years and under.

All performances are at the center, 802 E. Second Ave.

“Christmas Presence” is a fundraiser for the DAC, and proceeds go to support the center’s many projects.

For those not familiar with the scope of the DAC, it goes far beyond offering entertainment and providing a venue for forums and film showings. Center personnel teach art in schools and senior centers; they invite the community (kids as well as adults) to come to the center and participate in art classes.

The DAC hosts a two-week intensive art program for young girls. It also hosts the Children’s Musical Theatre. All the center’s programs are offered at as low a cost as possible and often scholarships are available.

For information about these and other programs offered by the DAC go to www. durangoarts.org.

“Expressing ourselves and our feelings through art is like free therapy,” says DAC executive director Sheri Rochford Figgs.

The DAC is also offering a “Revisit the Sixties” fundraiser and celebration for the whole family on New Year’s Eve. It will be from 8 p.m. to 1 a.m. at the DAC. Admission is $50 a person and includes appetizers, champagne at midnight, and a cash bar. All proceeds support DAC programs.

For those a little nervous about their moves, Kroger will be offering some quick private lessons before you hit the dance floor.

In the theatre, Tracy Lynn Thomas (who played Patsy Cline in the recent smash hit “Always Patsy Cline” at the DAC) and a couple of her Broadway friends will be presenting a show.

And there will be big-screen televisions for viewing the “Ball Drop” in Times Square.

For an extra $10 a child, the DAC will provide an educational, yet fun evening for them.