A sustainable future for Cameron?

Despite controversy over a wind farm, the Navajo chapter looks ahead

Julia Curley spoke up at the February meeting of the Cameron (Arizona) Chapter of the Navajo Nation. 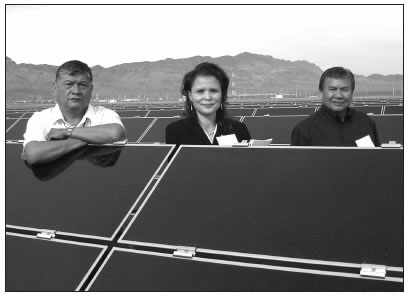 She told her fellow chapter members the time has come for the community to consider their grandchildren’s future. Last week, she said, her sheep moved halfway up nearby Gray Mountain. When she climbed the rocky slope to bring them home she stopped to sit and rest, and considered how the time for grazing large flocks of sheep on Gray Mountain has almost passed.

“We have a new future before us,” she said, “one that the Navajo wind farm could support, a new, clean economic future that will be good for our grandchildren.”

Curley was one of many residents expressing opinions about the longterm benefits and compensation to the community that could come from a proposed wind farm on top of Gray Mountain.

More than 50 people, a larger crowd than usual, gathered in the small chapter house. They came in response to the controversy swelling around development rights for the wind farm.

International Piping Projects and Sempra Generation, companies that have been working with the chapter for two years on preparatory steps for a wind farm, are seeking support for further steps in the permitting process with the Division of Natural Resources, a division of tribal government in Window Rock.

But the central government run by President Joe Shirley, Jr., has opted instead to partner with a Boston-based company headed by Joe Kennedy II to develop a wind farm on the same mountain.

The resulting controversy [reported in the Free Press in December 2008 and January 2009] has set the project back for months or years.

“We are resolute in our decision that IPP and Sempra are the best partners for the Cameron Chapter. They have the experience, financial resources and long-term commitment needed to develop, build, own and operate this project thereby creating real benefits for the Cameron Chapter and the Navajo Nation,” wrote Cameron Chapter President Ed Singer in a recent letter to Kennedy. “And they have become trusted members of our community.”

But Kennedy’s nonprofit, Citizens Energy, and its for-profit subsidiary, Citizens Wind, had meanwhile partnered with Diné Power Authority and the Shirley administration. The Cameron community, which lies far from Window Rock on the northwestern part of the reservation near the Grand Canyon, knew nothing of the partnership until it was reported in the Arizona Republicon March 28, 2008.

Kennedy drew a standing ovation when he spoke before the tribal council, but got a frostier reception from the Cameron people during a meeting at the chapter house on Dec. 11.

Kennedy later sent a letter to Singer arguing that his company should be chosen to develop the wind farm because it would give more to the tribe than Sempra. He made reference to a $430,000 grant Citizens Energy gave to the Navajo Nation last winter, reminding Singer that $300 of it was dedicated to the Cameron community for help with heating costs.

It was an unintentional example of the reasons many Cameron residents prefer Sempra over Citizens. Whether or not Citizens gives the tribe more money, they say, the chapter itself will likely see many more direct benefits from Sempra, which has already improved roads, stock ponds and Internet service.

Kennedy reportedly was to attempt to remedy that feeling by making a sudden appearance at Cameron on April 1 to offer the community a $50,000 grant toward individual heating expenses. Singer, however, said he might reject the grant because the money is connected to Citgo, which helps fund Citizens. Citgo receives oil from the controversial Venezuelan regime run by dictator Hugo Chavez.

Singer also said the grant would have too many strings attached to it.

Singer and Kennedy have traded barbs and insults in letters to the editor in regional papers. On Jan. 13, Singer wrote, “As the President of the Cameron Chapter of the Navajo Nation, I demand that you immediately stop interfering with our community based initiative to develop the Navajo Wind Project on Gray Mountain in Cameron, Arizona. We have repeatedly told you that we do not need or want your involvement in our project.”

He reminded Kennedy that Citizens has not completed any work in the community — no anemometers, no feasibility studies.

“If you are honestly committed to helping communities such as ours, please stop interfering with the Cameron Chapter… Instead,” Singer wrote Kennedy, “we suggest you support wind development elsewhere including the Cape Wind Project in Massachusetts.” That project has been famously opposed by many in the Kennedy clan, though not necessarily Joseph II, because it is near their beachfront compound.

A celebrity back East

That comment made Singer a celebrity on Jan. 22 in Massachusetts when the Cape Cod Times honored his comment as its “quote of the day.” The Boston Herald picked up on the story as well, running the headline, “Joe Kennedy Tries Wind Grab.”

But Kennedy was undaunted. His letter back to Singer accused the president of putting the interests of a select few above the concerns of the many. He wrote, “In fact, your advocacy may be denying many members in your community the right to open, honest discussion about the lawful development process of projects on the Navajo Nation.”

The back-and-forth continues in the press. Singer published letters to Kennedy in ads run in the Four Corners Free Press, Navajo Times and the Hopi-Navajo Observer, a tactic he said was necessary because his first letter to the editor at the Navajo Times was not published.

In the latest round, Singer demanded that Kennedy leave the reservation or be thrown out. He quoted President Shirley, who said during a speech on Feb. 2 in Farmington, N.M., that “the battle cry of the people should be independence… it’s your house, it’s your castle… you can throw someone out if you want.”

Meanwhile, Sempra Generation has continued to work with the Cameron community.

On March 22, Cameron chapter residents passed two resolutions submitted by Sempra/IPP that gave approval for those companies to conduct all necessary environmental, scientific, and engineering studies for the future wind farm and to commence landlease negotiations through the central government.

The decision about which company will do the project may not come for months, as the Navajo Natural Resources Committee works out rules that will govern future similar developments.

But while the battle continues, a remarkable vision binds the Cameron people — a dream of a more prosperous future and an increased sense of pride and dignity.

Four pre-assembled hybrid wind-solar skid units await installation at homes in the community of Cameron, Ariz., on the Navajo Nation. The units provide power to homes where it is not feasible to connect to the electrical grid. Photo by Sonja Horoshko

It is their fundamental collective position to “walk the walk” of renewable energy. In 2006, Rayola Werito, chapter community-services coordinator, wrote a $1.9 million grant to bring Sacred Power hybrid wind and solar energy units to 100 previously powerless homes in the community, where even running water is a rarity. The preassembled skid units are individually delivered and installed at each residence. They provide clean, renewable energy with an 800-watt fixed solar array panel and a 800-watt wind turbine.

Eighty-five have been installed in the Cameron community from the original 100 in the grant. Fifteen are being delivered this year. And plans are being made to order another 100 in 2010.

“It’s an opportunity for people to learn to be judicious about how they use electricity, how to plan their day around the sun and the wind. It is great to look around our community and see the units beside all the homes,” said Werito.

Last year Sempra leased a building near the chapter house for its project offices. They installed a hybrid system, too. The large 2.6-kv turbine and a thin-film solar panel supplementing conventional electrical power sources at the office building will be donated to the community after the project is completed and Sempra moves out.

The chapter house itself, designed and constructed in the early 1960s, is also in line for green energy. It will be replaced with a new building by 2012. Werito contacted a high-school classmate, Michael Lomakema, who works as a project engineer with an architectural firm located in Phoenix.

Schneider Shay Pian & Pittenger Architects, LLC, have been designing large-scale projects on the reservation for 30 years, including the Cameron elementary school just a few miles down the road from the chapter house.

Recently, when chapter representatives met with the architectural/ engineering team, they expressed interest in biomass systems, radiant floor heating, passive solar, earth plaster and the use of a pellet stove for heating the meeting hall.

Lead project architect Carlos Murrietta commented, “I have always wanted to design a building to meet the needs of a client willing to address green building as a viable option and economically wise solution.”

The architectural firm prefers a symbiotic design that provides a deeper relationship to the community.

“When we worked on the Cameron school we listened to the elders,” explained Herb Schneider, a partner in the architectural firm. “It made all the difference in a successful design process.”

When Murrietta asked Cameron resident Leonard Gillmore about his vision for the chapter house, Gillmore described how the building could show a sense of strength.

“We have been so disempowered by the lack of water… remaining vigilant about the effect Peabody Coal mining operation has had on pristine water and working as activists through the Black Mesa Water Coalition to protect the water on top of Black Mesa [that] it would be great to see some water outside the chapter house… a water element. It would send the message that we survive. The water is here. We are still here.”

Michael Lomakema, a member of the lead design team, grew up in Tuba City, Ariz. As assistant project manager for Coe and Van Loo, the engineering company associated with the project, he said, “It has always been my desire to get an education and then go back to help my community, be part of the future. Never in my wildest dreams did I imagine I’d be working with the nation on this scale.”

“I hope to see free mass transit for the area — hydrogen-fueled, local mass transit that will help business. People will be able to get around, get to work without waiting for a family ride, always being the spectator instead of a participant. Services at Tuba City and Flagstaff, medical appointments and other necessities become accessible. It could also help the local tourism economy.

“As it is right now, many border businesses practice economic racism. Tour companies are told to not let their passengers buy from locals. But if we were able to move tourists around to alternative sites where they can interact with our people, they would experience genuine cultural exchange instead of canned tourism.”

Singer added that he and others believe it is possible to provide clean energy throughout the community through biofuels and dedicated wind turbines.

If that becomes reality, the traveling public that pours through Cameron en route to the Grand Canyon could be riding free hydrogen-fueled transportation. It’s possible that ball caps, Tshirts, and key chains will be emblazoned with the new poster children of U.S. renewable-energy policy: Native and natural, Navajo Wind — empowered by a community vision that provides green energy for all.