A trio of local voices 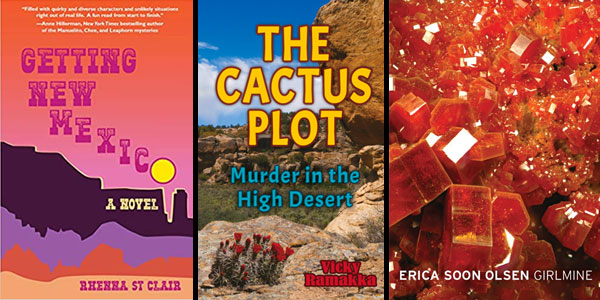 I have the pleasure in this month’s column of introducing three new books by local authors. While firmly placed in the Four Corners, all three books — by Rhenna St. Clair, Vicky Ramakka, and Erica Soon Olsen — wrestle with the universal themes of personal growth and finding one’s place in a challenging world.

St. Clair’s Getting New Mexico (Pace Press) is a humorous fish-out-of-water tale. In return for continuing to receive the financial handouts to which he has long been accustomed, lifelong moocher and dedicated laze-about Aaron Schuyler accepts his banishment to Santa Fe, New Mexico, by his wealthy Manhattanite mother. Aaron’s mother hopes her son will learn some self-reliance while he’s all alone in what she perceives as the distant, backward Southwest. Instead, Aaron meets a cast of quirky New Mexicans who teach him what it means to be a part of something larger than himself.

Anne Hillerman, author of the New York Times-bestselling Manuelito, Chee, and Leaphorn mysteries, declares Getting New Mexico “a delightful read from start to finish.” She says the book “moves along like a summer monsoon, building to a delightful climax.” My fellow Prose & Cons columnist Chuck Greaves, author of the recently released and highly praised novel Church of the Graveyard Saints, calls Getting New Mexico “a delightful tale of personal redemption set against the backdrop of northern New Mexico in which even the most jaded of newcomers might find magic behind adobe walls and love blooming amid the chamisa.”

Vicky Ramakka has captured the hardworking, blue-collar flavor of the northwestern New Mexico oil and gas fields in The Cactus Plot (Artemesia Publishing), a mystery appropriately subtitled Murder in the High Desert. The Cactus Plot features recentcollege- graduate Millie Whitehall, who leaves her lifelong home in New Jersey to take a job as regional botanist surveying endangered plant species for the Bureau of Land Management on the gas patch. Her work takes an unexpectedly deadly turn when autopsies show two seemingly unrelated deaths in the gas fields involve poison plants.

Ramakka, who lives in Aztec, has written a revealing tale of her home territory. Local environmental journalist Jonathan Thompson, author of River of Lost Souls: The Science, Politics, and Greed Behind the Gold King Mine Disaster, says Ramakka’s mystery “does an excellent job of capturing the sense of place and people of northwestern New Mexico, along with the ins and outs of oil and gas development there.”

Erica Soon Olsen has followed up Recaptured and Other Stories, her acclaimed book of short stories set in the Four Corners region, with Girlmine (Bull City Press), which features six new stories born of Olsen’s fertile imagination. The stories are presented in a new style of short fiction release known as a micro-book.

High in the San Juan Mountains of southwest Colorado, aspen trees come to life and boulders slide from place to place at will. In Olsen’s skillful hands, oddities such as these, in service to plots based loosely on Greek mythology, make for fun and thought-provoking reading.

Scott Graham is the National Outdoor Book Award-winning author of the National Park Mystery Series for Torrey House Press. The fifth book in the series, Arches Enemy, released in June, is available at Maria’s Bookshop in Durango and other area bookstores, and for order through scottfranklingraham.com.