A way to bring harmony: A Gourd Dance will be done at a Cortez church for the first time 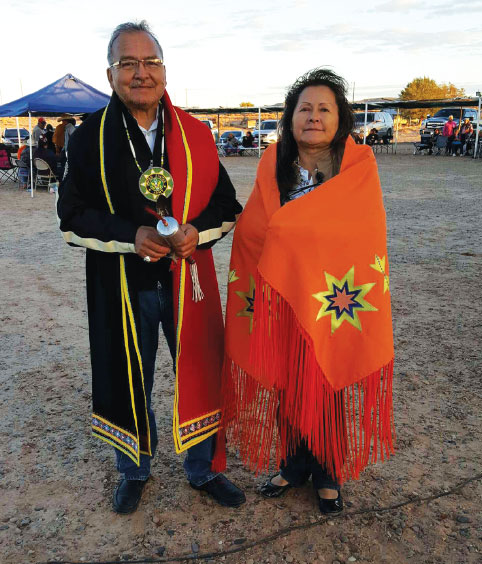 Pastor Norman Mark will lead the Gourd Dance on the grounds at the First United Methodist Church in Cortez. He is pictured here with his wife, Rebecca, in September 2018 as they participated in a similar ceremonial event. The Aug. 31 Gourd Dance is the first held on Christian church grounds in the region, says Pastor Jean Schwien. It is an event they hope will attract native people from surrounding communities and non-native people who wish to learn more about Native American culture at an authentic ceremonial dance honoring veterans and their families. Photo courtesy Norman Mark.

Legendary contemporary dancer Martha Graham once reminded us that practice is how we learn: “Whether it means to learn to dance by practicing dancing or to learn to live by practicing living, the principles are the same. One becomes in some area an athlete of God.”

Native Grace Intertribal Fellowship is hoping to exemplify that kind of living harmony when they present a traditional Gourd Dance in late August on the grounds of the First United Methodist Church in Cortez.

“It is a first,” says Native Grace Pastor Norman Mark.

“There is no other example of traditional native dance on Christian property that we know of in our region. The Gourd Dance is an opportunity to make the bold statement that a person doesn’t have to choose to be either Christian or traditional native. A person can be both and be blessed by practicing how to live side by side in harmony,” he says.

The Gourd Dance was begun by the Kiowa and Comanche tribes of the great northern American interior plains in the late 1700s, according to Roy Cook, a member of the Golden State Gourd Society on line at the website American Indian Source.

Songs associated with the gourd societies and the ceremonial dances were not presented in public until the middle of the last century, when a revival of the tradition gained popularity after the Second World War. At that time, many indigenous people drafted into the U.S. military served with great distinction beside white soldiers. The resulting experience of equality between native and white troops reinvigorated the effort to honor warriors in the Plains tribes by finding a means to translate the old ways into appropriate modern traditions. Fortunately there were people left who still remembered the old ways and the old songs when the Gourd Dance was reorganized in the 1950s.

In a traditional version of the Kiowa warrior song, a lone surviving warrior is trying to find his way back home to the tribe after a battle. He hears music and finds Red Wolf singing and dancing and holding a fan in one paw and a rattle in the other.

Red Wolf feeds the warrior and tells him to take the songs back to the tribe.

Cook explains that, “the call of the wolf is at the end of the song. If you listen closely you will hear it.”

When the warrior societies and the Gourd Dance were revived, women again sang the War Mothers’ Songs of Victory and men sang Songs of Brave Deeds. The warrior societies found a logical and useful extension in serving veterans returning from the Second World War. Much like the non-Indian Veterans of Foreign Wars and American Legion, these societies honored their returning soldiers.

The Kiowa have passed this warrior society on to other organizations and tribes.

The Gourd Dance is now known as an intertribal veterans dance found throughout the various tribal nations in the United States, honoring the military men dancing with a gourd and a fan. They are the warriors willing to lose their lives in defense of the people.

Pastor Jean Schwien is clear about the purpose of offering the Gourd Dance on the First United Methodist Church property.

“This is an opportunity for Christian and native traditional cultures to work in accord with each other. Unfortunately, it doesn’t often happen. If it does, it’s all about Anglo people helping native people in whatever way Anglos believe to be appropriate. This is a whole different thing.”

The Native Grace Intertribal Fellowship meets on Sunday afternoons in the Methodist church sanctuary. Mark describes it as “a place of our own; traditional and Christian, with storytelling, dancing and singing. We are reaching out through our mission to teach that a person can be both Christian and traditional Diné, Ute or any other tribe.

Many reservation churches teach that a native person must turn away from traditional cultural practices because the beliefs are evil, or of the devil, he says. As a result, most Native Americans struggle with Christianity coming out on the reservation with such messages, says Mark, whose home is near Hatch Trading Post on the Navajo reservation.

“Being told you are evil makes it difficult to come forward and express who we are and not be ashamed of the traditions we come from,” he said. “The day I could say, ‘this is who I am. I am native and I am Christian at the same time’ was the day I opened up and began to heal.”

Mark says that boarding school told him not to speak his Navajo language and to be afraid of being native.

But five years ago he began a course of studies specifically for Native American pastors. That opportunity to study with the Rev. Calvin Hill on the Blackfeet Parish in Montana brought him to an understanding of who he was and how to heal from the lack of self-respect taught him as a child.

Now, a pastor at Native Grace, he feels his opportunity to work with Pastor Schwien is very potent, and as they are discovering, very rare.

“I am not generally welcome in the Christian churches on my own reservation. They won’t let me preach in their churches. But I am embraced by many traditional people out there and asked very often to conduct traditional services for funerals, baptisms and other family ceremonies.”

He even conducted an interfaith baptismal that included the Catholics, the traditional and the First United folks, Schwien adds, explaining that when Moses sees the burning bush in the Christian Bible story, “God speaks to him and says, ‘Take off your shoes. You’re standing on holy ground.’ I can’t understand how reservation preachers can overlook this; how they can persist in being out of Christian balance with the sacredness of mutual respect for the places we worship and how harmonious our beliefs are, how much we have in common.”

The Gourd Dance is being held on the grounds where Native Grace hopes to build a hogan sanctuary in the future. “It feels like we’re making progress and we want to invite all the people out on the nearby reservation to attend,” Mark tells the Four Corners Free Press. “It feels like the right time to do this. All are welcome.”

The Gourd Dance begins at noon on Aug. 31 at 515 N. Park Ave. in the field on the northwest corner of the grounds. It will continue throughout the afternoon, accompanied by the Alfred Wall Drum from Towaoc, followed by a feast at the end of the day. Two sheep have been contributed for the mutton stew and space has been designated for arts and crafts, and bead stands where vendors can set up their shade tents in the designated ring around the dance grounds by paying a $10 registration fee. A blanket dance will also be performed in the afternoon for contributions to the Native Grace hogan church building fund to be built on the dance ground site.

The Gourd Dance is a “give back” for Mark’s initiation into the Dzil da’ hi zilíí Gourd Society. “When we’re initiated we are asked to give back a Gourd Dance. This is my give back. I welcome the Anglos who want to learn about one of our traditions first-hand, from this traditional event, from our point of view.”

He reminds people who may not know that guests should bring their own folding chairs and that those who have shade should offer space to people who didn’t bring an umbrella. “Anglos may not know the importance of chairs and umbrellas. It is necessary to be comfortable, to relax and enjoy the beauty of what will happen at the Gourd Dance that day.”

It is a huge step for the morning congregation, Schwien says, referring to the Anglo congregation by their familial church moniker.

“We’re all trying to get better at being in a harmonious relationship that expresses our many shared beliefs. It is critical, especially today as we face so much unconscionable political behavior.

“In our culture, Anglos are comfortable controlling the money and the power, so when Norman came to me to discuss the Gourd Dance as something he and the native people wanted, we agreed it would be a hopeful and healthy event, and moved forward.

“Native Grace makes their own decisions about all they do on our shared grounds. Since Norman has been conducting the afternoon Native Grace services, our relationship with each other is enhanced. To say we are glad about this is greatly understating the big steps we have taken together.”