One day, 5-year-old Gail Harris sat at home in Newark, N.J., watching TV with her dad.

“Now my dad was both visionary and old-fashioned,” she laughs. “You know. ‘We watch what I wanna watch when I’m home’.” 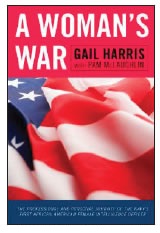 He was watching ‘Wing and a Prayer,’ the story of the aircraft carrier USS Enterprise. When Commander Harper, played by Don Amece, briefed his pilots about Japanese positions on Midway, Gail announced that she would do that when she grew up.

Her father could have told her that very few African American men — let alone women — became military officers. Instead, he said, “This is America. You can do whatever you want.”

So in 1973 Gail Harris became the first woman in naval history to serve as an intelligence officer in a combat aviation squadron. Thereafter, as the first female or African American in every job assigned to her, she assumed leadership positions in conflicts from the Cold War to El Salvador, Desert Storm, and Kosovo. She headed the Defense Department Intelligence Support for the 1988 Olympics in South Korea, and worked to counter cyber-warfare. At retirement in December 2001, Capt. Gail Harris held the highest rank of any African American woman in the Navy.

Now, she has written her memoir, “A Woman’s War: The Professional and Personal Journey of the Navy’s First African American Female Intelligence Officer,” published by The Scarecrow Press. Harris, a resident of Durango, Colo., has appeared recently in several venues in the Four Corners to do booksignings and talks.

“In the back of my mind I always wanted to write a book, but I didn’t know what topic,” she says. Then came 9-11. Listening to the criticism of the intelligence community and realizing that sound-bite TV news didn’t deliver enough information for people to understand the world situation, she decided to write about intelligence work. She also wanted to encourage young people into the intelligence profession. “My dream had been so unlikely, and yet I achieved it.”

She achieved her dream through self-motivation, because after her initial training, she received no follow-up courses. “If you weren’t highly motivated, you wouldn’t do a very good job.”

For some situations, there was no preparation. She recalls coming on duty one Sunday expecting a peaceful shift. “The Soviets might not believe in God, but they don’t work much on Sundays. So for once my hair [wouldn’t] be on fire and I [wouldn’t] be running around with no time to go to the ladies’ room.“

Buying herself an ice-cream sandwich, she settled at her desk, glanced at her computer and saw Soviet reconnaissance flights over international waters. Usually they flew north of Japan. Today they headed south, between Japanese and South Korean air space.

Viet Nam and Russia had signed a friendship treaty. China had invaded Viet Nam. But now what? Were the Russians going to war for Viet Nam, or just showing China their strength?

“How do you train somebody for that?” She chuckles. “I never did get to finish my ice-cream sandwich.”

Many times, she taught herself. When assigned to Latin American intelligence projects, she read every book she could find on the area. “I decided to become a competent Latin American analyst, and I did.”

In “A Woman’s War,” she states that despite belief to the contrary, intelligence agencies work closely together. The CIA is one of 16 such organizations, and together on any given day, they can gather a billion pieces of information, much of it shaky. Intelligence officers must rely on their knowledge to interpret what they have found.

Harris always employed her sense of humor. Her commanders warned her that as a woman, she would meet resistance, and gave her a few jokes to help her approach the male officers on her first job. She used them. They accepted her.

Commanders ordered men to watch their language in her presence. When they forgot and blushed, she said, “That’s okay — I don’t speak French.”

Once, an angry sailor accused her of taking a job from a man. She said, “You know, you’re right, but I’m from a poor family and nobody wanted to marry me.”

Writing “A Woman’s War” brought her both pleasure and pain. She had to learn to write, and she also was forced to recall nasty experiences as well as good ones. She didn’t want to whine about the bad stuff, so she tried to write from a “detached perspective. I think it was an emotional healing and a cleansing.”

Then Cold War information was declassified, and she could explain the nitty-gritty intelligence work. She decided she could sell her book because she often gave motivational speeches to business people, and audiences relished her stories.

However, when she finished “A Woman’s War,” traditional publishers saw no market for it, since she did not sensationalize her story. Seven years of rejections followed, and she decided to give up if no offers came by January 2009. Scarecrow’s acceptance letter arrived in December 2008.

Harris laughs. “Just goes to show you. Don’t be afraid. Just keep trying.” That’s got to be the understatement of her life.