Action outside the convention proves lively

“What a field day for the heat, a thousand people in the street. Singing songs and carrying signs, mostly say hooray for our side.”

“For What It’s Worth,” the classic ’60s protest song, came to mind during a recent four-day hippie fest in Denver, otherwise known as the Democratic National Convention. A thousand people in the street would be putting it mildly, however.

Think the Boulder Mall Crawl during Halloween in the 1980s, or Mardi Gras in New Orleans. Likewise in Denver last week, liberals and progressives gathered by the tens of thousands along the trendy 16th Street Mall to put their best Birkenstocks forward and celebrate Barack Obama’s historic run for U.S. President. 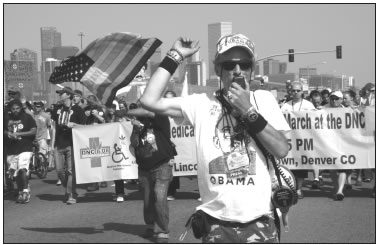 Grabbing your wife’s hand and wading into this sea of partying humanity was all one could do. All the while bellowing buffoons attempted to force passers-by into joining their particular cause including, but not limited to: free weed for the masses, no more war, no more capitalism, just say no to imperialism, God is great, Hillary for president, no more sex, Bush is the anti- Christ, save Iran, save Darfur and of course, Save the Whales!

Then there were the cops, as the tune continues: “Step out of line, and the man come to take you away.”

And that he did, as one ABC reporter learned after he refused to stay out of the street as ordered by police. “Someone pushed me,” he wailed while being hauled off by the man.

It was reported that a whopping $50 million was spend on security for the event, and it showed. 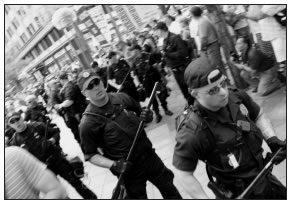 Police prepare for trouble in Denver during the convention. However, protests were largely peaceful and few problems were reported. Photo by Wendy Mimiaga.

Police were in full riot gear and gathered at nearly every corner, staring coldly at anyone daring to meet their gaze. Some had automatic weapons with orange tape on the muzzles — rubber bullets? There were cops on bicycles, in cars, on Harleys, driving around slowly in paddy wagons. Even the horses they rode had little riot-gear masks on!

But there was not much trouble — how could there be? Honestly, the cops looked bored, a little embarrassed perhaps. It was more of a babysitting job for the police, but some did live up to their thuggish image by blasting pepper spray from what looked like a fire extinguisher into a crowd for being too disruptive.

“Don’t consent to a search,” a crowd of lively youth chanted at one of the few permitted protest marches, in this case against criminal marijuana laws, on Aug. 28. There were free burritos, really bad rock music, “protest” dogs and that signature blue haze floating above the crowd as the march began in a quaint Denver neighborhood.

“Free the weed, brother!” one guy jokingly yelled at a cop, offering his outstretched hand for a slap. He coldly refused, but the tattooed officer next to him obliged, shrugging at his cohort “Ya gotta do it!”

Police filmed the march, but a group called Cop Watch filmed them as well. “We do it to document any police brutality, to protect your civil liberties in court,” one of them explained to me.

Overall, everyone had a good time. A woman gave me a flag that read, “Down with the Bush Regime,” so basically, any issue would do, a mishmash of liberal causes all blended together to the point it was hard to make sense of it all.

The march continued over some overpasses, all closed to traffic, and on to Mile High Stadium, where searing heat melted the enthusiasm of the marchers into a desperate search for shade and water.

In a few hours the Democratic celebs would speak to thunderous cheers at the stadium. But spectators had to wait in a two-mile-long line for three hours for the honor!

“Battle lines being drawn, nobody’s right if everybody’s wrong. Young people speaking their minds, getting so much resistance from behind.”

That was the tone at a Denver University auditorium the day before, where Ralph Nader, Jello Biafra, Cindy Sheehan and Sean Penn spoke to a crowd of 4,500 enthusiastic college students.

Sheehan, whose war protest in front of George Bush’s Texas ranch drew national attention, began the predictable tirade. “My son was stolen from me,” she said. “He was murdered by Bush, the boil on the ass of democracy!”

Actor and activist Sean Penn stepped to the podium, wearing those little reading glasses on the end of his nose to look more intellectual. He called Obama “the status quo” and quipped that “hope never rises from staunch pragmatism.”

Jello Biafra, rabble-rouser, poet and Dead Kennedy band member, chimed in about the $50 million spent to prevent protesters from having a say. “What are they afraid of? Someone throwing a pie at Nancy Pelosi? Who pocketed the $49 million left over?”

Biafra went on to accuse Colorado lawmakers of supporting torture of war prisoners, condoning spying on Americans and ignoring the international community’s offer to end the U.S. involvement in Iraq.

“Pakistan, Yemen and Bangladesh offered 150,000 troops under United Nations control to replace ours, but Colin Powell slammed the door,” he said. “That idea is worth visiting.”

America can be cured, Biafra continued, by implementing a living wage, rent control and free health care, but action is required by regular people. He cited the housing foreclosure crisis in Boston, where “rolling brigades of citizens” successfully prevented banks from seizing homes.

For Nader’s introduction, guitarist Tom Morello whipped the crowd into a sing-along with Woody Guthrie’s “This Land is Your Land.”

Nader, who is running for president and is on the ballot in 45 states, immediately leaned in against the Democrats for selling out to corporate interests.

“At Invesco Field, they are selling sky boxes for the speech, $1 million for Coors, Qwest paid $6 million. These should be hospitality suites for farmers, nurses, students and teachers,” Nader stated.

“The party is sick and decaying, it has lost its soul. They never talk about the poor, they talk about the middle class, which they helped shrink with NAFTA and trade laws,” he continued.

Nader blames the two-party state for the downfall of democracy. He said the Democrats and Republicans are alike “in the velocity that their knees hit the floor when corporations pound at their door.”

He said third parties promote a more accountable democracy, not the one today where “poor whites, African Americans and Latinos do the thankless work, are underpaid and are excluded and disrespected except when we want them to fight our criminal wars.”

Reform is necessary on many fronts, Nader said.

On health care, “where we are the richest nation but 18,000 die per year because of lack of care.” On corporate crime that is never prosecuted, “even though we see it in the paper all the time.” On the failed war on drugs, “where we send drug addicts to jail, when they should get medical care for their health problem.”

On incarceration of non-violent criminals and drug offenders “who should receive amnesty, and the empty cells filled with convicted corporate criminals.” On money spent on foreign wars and “fascist governments instead of on public works that create jobs and infrastructure here.”

He called for 18- to 24-year-olds to improve their poor voting record Participating by not participating is a copout, Nader advised, “a type of sophisticated cynicism that is ineffective.”

Meanwhile, over at the Progressive Tent, a two-story affair packed with meeting rooms and more speechifying, former CBS anchor Dan Rather held forth about the spineless corporate media he was once a part of. 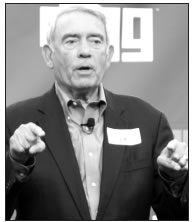 Former CBS anchor Dan Rather criticized the corporate media during the convention.

The mainstream media miss the real stories, Rather told a scattering of reporters, and it is up to the independent press to get the job done.

“Follow up on the money that goes into the political system. That is a big story rarely told, who gives the money and what do they expect to get.”

A free and independent press is crucial for an informed public, Rather said, but “t starts with an owner who has the guts to let reporters ask the tough questions.”

Giant mergers now “water down the news,” he said, “because large corporations have nothing to do with the news, they are concerned with profits for their shareholders.” The result is that TV news has deteriorated into instudio shouting matches, celebrity fluff and dramatic court cases.

“Good reporting requires resources and talent, but that incentive is not there with corporations,” he said.

“American media has a spine affliction,” he said. “We are entitled to news that is diverse and for the people.”

Rather described the mainstream media as more of an “echo chamber for government policy” than a watchdog.

The old saying, “Afflict the comfortable, comfort the afflicted” should be the goal of journalism, he said.

“A good investigative story is an irritant that turns into a pearl of public trust. Nowadays that irritant is too often just spat out.”