An activist for Indian rights

Mary Lucinda Bonney was the fourth of six children born to a devoted Baptist family in Hamilton, New York, on June 8, 1816. Her father was a farmer in good circumstances, said to be a man of integrity, sound judgment and strong influence. Her mother had been a teacher before her marriage (she could not remain a teacher and be married) and was known to be very cheerful, kind, interested in everything that concerned education, moral and religious movements. This was evident in way they raised their children. 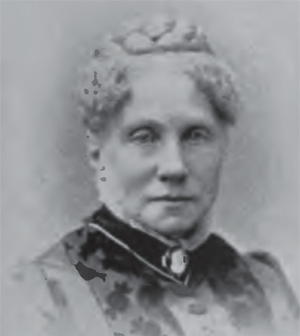 Mary’s education began at the Ladies Academy in Hamilton but soon transferred to the Troy Seminary, where she studied with Mrs. Emma Willard. The seminary was then the highest institution of learning for young ladies in this country.

She taught and held administrative posts in schools in Jersey City, various places in New York, South Carolina, Providence, Rhode Island and Philadelphia. She experienced great sorrow in 1850 with the loss of her father and hoping to care for her bereaved mother, she, with Harriette A. Dillaye, a former student and teacher at the Troy Female Seminary, established a school. The Chestnut Street Female Seminary (later the Ogontz School) in Philadelphia. The school offered young women in their teenage years both boarding and day school opportunities, focusing on liberal arts education that included science, humanities and physical education. The school grew and prospered and is currently the site of Penn State Abington College.

In 1878 when Congress proposed to take land from the treaties reserving lands in Indian Territory of particular tribes, Mary became an activist. She was very upset with this turn of events and began a petition, asking assistance from colleagues and church members. The campaign collected about 13,000 signatures and presented the petition to President Rutherford B. Hayes and then on to Congress.

In 1881, there was a subsequent petition that held 50,000 signatures and was presented to the Senate through Senator Henry L. Dawes. A year later she and some of her followers officially became an association, the Indian Treaty-Keeping and Protective Association. Mary was elected the first president. In 1882, a third petition with double the signatures was presented outlining a proposal to grant tribal lands to Native peoples.

She was one of the most important figures in the movement for the protection of Native Americans’ lands. The efforts she initiated finally culminated in passage of the Dawes Severalty Act of February 1887, which embodied the allotment principle.

After Bonney’s resignation in 1884, from the presidency of the organization and her retirement in 1888, from the administration of the Ogontz school, she remained active in the Indian reform movement. In 1888 she attended a London conference of Protestant mission societies. There she married the Reverend Thomas Rambaut. The two had known each other when she worked in South Carolina. She was 72 when she married him. He died in 1890. Mary spent her last years in her hometown of Hamilton, New York.

Margaret “Midge” Kirk is a slightly eccentric artist, writer, bibliophile, feminist scholar and hobby historian who lives in the SW corner of Colorado. She can be reached at eurydice4@yahoo.com, or visit her website www.herstoryonline.com.