An amazing and influential leader

“We have a powerful potential in our youth, and we must have the courage to change old ideas and practices so that we may direct their power toward good ends.”

By the age of 9 she could pick 250 pounds of cotton. Her name may be remotely familiar, but what do you really know about her? Mary Jane McLeod Bethune became one of the most important black educators, civil and women’s rights leaders and government officials of the 20th century. The college she founded set educational standards for today’s black colleges, and her role as an advisor to President Franklin Delano Roosevelt gave African-Americans an advocate in government. 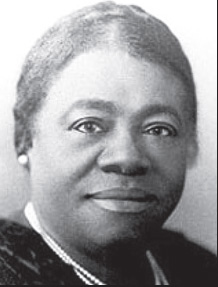 She was born in Maysville, South Carolina, on July 10, 1875. She was the last of former slaves Samuel and Patsy McLeod’s 17 children. She grew up in great poverty. Most of her siblings were born into slavery. Everyone in the family toiled in the cotton fields. Her parents longed to be independent and they sacrificed greatly to buy the fields they toiled in.

When the Civil War ended, her mother worked for her former owner picking cotton and took in laundry until the family finally had enough money to buy the land they worked. Mary often accompanied her while delivering “white people’s” wash. One day she was allowed to go into the white children’s nursery and she was fascinated with their toys and books. She picked up one book and as she opened it a white child snatched it out of her hands, saying she didn’t know how to read. It was that very day that Mary decided that the only difference between white and colored people was the ability to read and write. She was going to learn.

She was the one and only child in her family to attend school. She walked many miles each way, every day, to attend the one-room Marysville Missionary School that had opened for African-American children. She did her best each day to share her newfound knowledge with the rest of her family.

She later received a scholarship to the Barger-Scotia Seminary College, which was a school for girls in Concord, North Carolina. After graduation from the seminary in 1893 she attended the Dwight Moody’s Institute for Home and Foreign Missions (also known as Moody Bible Institute) in Chicago. She graduated after two years and returned to the south, where she began a career as a teacher.

She realized at a very young age that education was very important and she devoted her life to creating and offering educational opportunities to others, regardless of race or economic background.

For nearly a decade she worked as a teacher. Mary married Albertus Bethune in 1898 and the settled in Florida. They had one child, a son, Albertus. She established the Daytona Educational and Industrial School for training Negro girls, which in 1923 merged with the Cookman Institute to become Bethune-Cookman Institute, where she was the head of the school until 1942. She also helped to establish the first black hospital in Daytona.

She was invited to the White House by President Herbert Hoover several times to discuss issues of housing and child health. During the Franklin Roosevelt administration she was director of the Division of Negro Affairs in the National Youth Administration. She enjoyed close working as well as personal relationships with FDR, his mother and his wife.

When she was drawing up her will, she said that her worldly possessions were few but her experiences were many and rich. She recorded a list of principles and policies to pass on to black people everywhere. She included the following statement: “Faith, courage, brotherhood, dignity, ambition, responsibility — we must cultivate them and use them as tools for our task of completing the establishment of equality for the Negro. The Freedom Gates are half ajar, and we must pry them fully open…I pray now that my philosophy may be helpful to those who share my vision of a world of Peace.”

In 1930, Ida Tarbell included Bethune as No. 10 on her list of America’s greatest women.

In the 1940s Bethune used her influence and friendship with Eleanor Roosevelt to secure buses for Eddie Durham’s All Star Girls Orchestra, an African-American all-women’s swing band to travel and perform.

Bethune was the only black woman present at the founding of the United Nations in San Francisco in 1945, where she represented the NAACP.

In 1949 she was the first woman to receive the National Order of Honor and Merit, Haiti’s highest award.

She served as the U.S. emissary to the induction of President William V.S. Tubman of Liberia in 1949, and advisor to five Presidents of the U.S.

In 1973 she was inducted into the National Women’s Hall of Fame.

In 1985 the U.S. Postal Service issued a stamp in her honor.

In 1985 Ebony Magazine listed her as one of the 50 most important figures in black U.S. history and in 1999, they included her as one of the 100 most fascinating black women of the 20th century. In 1991 the International Astronomical Union named a crater on the planet Venus in her honor.

In 2004 at the 100th anniversary of Bethune- Cookman University in a speech by the Vice President she was remembered as a “person who was able to bring black and white people together.”

Margaret “Midge” Kirk is a slightly eccentric artist, writer, bibliophile, feminist scholar and hobby historian who lives in the SW corner of Colorado. She can be reached at eurydice4@yahoo.com or visit her website www.herstory-online.com