An effortless switch from literary to mystery

It’s not uncommon for authors of literary fiction to try their hands at the mystery genre. Many bomb out, some spectacularly, incapable of switching from the introspective nature of literary novels to the fast-paced, entertainment-oriented style of storytelling appreciated by most mystery readers. 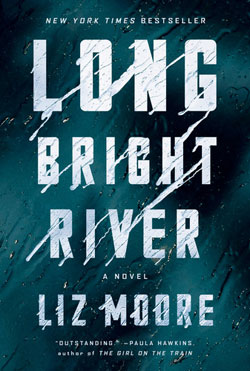 Set in the blighted neighborhood of Kensington in Moore’s adopted city of Philadelphia, where she is a professor of creative writing at Temple University.

Long Bright River tells the story of Mickey Fitzpatrick, an officer with the Philadelphia Police Department. Though Mickey’s seniority after several years with the department would enable her to work more affluent parts of the city, she instead patrols Kensington, as she has since joining the force. By continuing to patrol the neighborhood’s crime-ridden streets and rat-infested drug houses, Mickey can keep an eye on her estranged sister Kacey, an opioid addict and sex worker on the Ave, as the main thoroughfare through the rough north Philly neighborhood is known.

The novel is set in motion by a pair of simultaneous events — the disappearance of Kacey from the corner she normally works on the Ave, and the first of what quickly becomes a string of murders of young, female sex workers in Kensington. Mickey becomes dangerously obsessed with finding Kacey and tracking down the serial killer, rumored to be one of Mickey’s fellow officers, leading her to make a series of unprofessional decisions that endanger her career and her life.

Nearly half of Long Bright River consists of background scenes intertwined with the present-day mystery. The flashbacks reveal the abusive childhood and adolescence suffered by Mickey and Kacey, leading to the story’s heart-wrenching climax, when the sisters’ past and present inevitably collide.

The undeniable power of the novel lies in the skill with which Moore brings her characters and inner-city Philadelphia to brutal, compelling life. At the same time, the compassion Moore displays for Philadelphia’s most troubled and damaged citizens provides readers the opportunity to comprehend and find sympathy for those trapped by the twin scourges of sex trafficking and drug addiction wracking America today.

Scott Graham is the National Outdoor Book Award-winning author of the National Park Mystery Series for Torrey House Press. The sixth book in the series, Mesa Verde Victim, is scheduled for release in June, and will be available for pre-order through scottfranklingraham.com beginning next month.