An oasis on Cortez’s Main Street: The saga of how a tiny park came to be, thanks to the Lions Club 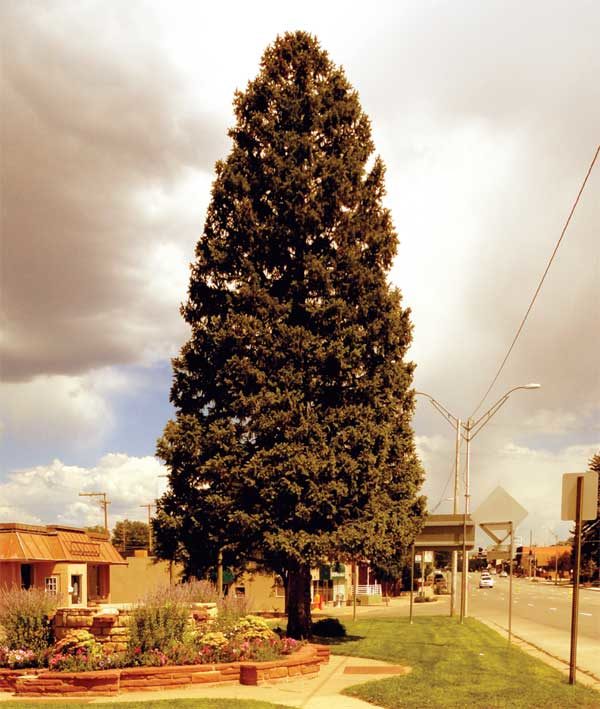 Cortez is in the design development stage of a Main Street beautification project the city hopes will slow traffic, enhance the identity of the city and grace the lives of residents and businesses in the five-block downtown corridor at the center of the concept.

In a July community outreach meeting, City Public Works Director Phil Johnson said that the Main Street project is focusing on building a median that will improve the central business area.

“The medians will be installed on each block from Elm to Ash,” Johnson said. “Medians are a traffic-calming technique, because as you narrow a lane people tend to slow down. The medians will feature landscaping and possibly some public art.”

But one block west of Elm, another older Main Street asset – a minuscule park in the middle of the intersection where the street divides – has been beautifying the city for decades without much fanfare. Although the mini-park feature has flourished since the late 1950s, it has also become so much a part of the city landscape that it is almost invisible to the general public. Cortez has grown accustomed to its charm.

Planted on the east side of the landscaped triangle is a 50-foot blue spruce tree. It marks the spot where the street divides, splitting half of the Main Street traffic off on Piñon Drive toward North Broadway. The other traffic continues on towards South Broadway a few blocks west of the split. “The West Y” is a vernacular mapping reference to the west end of town.

The city adorns the tree with multicolored Christmas lights in December and maintains a plentiful flower bed brimming with blossoms during summer months. The area thrives in the middle of Main Street, withstanding the pollution and noise generated from increasing traffic on the street that is also U.S. Highway 160, a trucking route and a link to native communities and tourist destinations.

But the tiny Main Street beauty feature was not the idea of the city when it was built. Nor was the concept put out to bid or constructed by a company. It was, instead, a project of a handful of Cortez businessmen who sought to enhance the city. They were not interested in slowing traffic in those days, but on embellishing the city with a water fountain.

Cortez resident William Winkler chronicled the story of the water project in a hand-written journal entry submitted to Slavens True Value Hardware during its 60th anniversary in 2011. Winkler, now in his early 90s, explains that the original water fountain was the brainstorm of Basil Slavens, the owner of the hardware store directly south of the Main Street triangle where it was built. He elicited the help of a few other men, including Winkler, to construct the landscape feature. All were members of the Cortez Lions Club, and took on the project in the name of public service.

“It was the late 1950s when we had finished the hospital and were looking for a new project. The triangle in front of the store had a lawn, but no trees or bushes,” wrote Winkler.

The Lions Club members, known for civic-minded work, were inspired by the location of the small triangle at what was then the center of town. “Beautifying that triangle became our project. As we worked on it, one of the men had a 5 foot blue spruce growing in his lawn at Market and Montezuma. I had a twin boom wrecker and the experience to ball and burlap the tree. It weighed several tons, so the wrecker was needed to move and transplant the tree that still grows there.

“The tree, only an infant at the time, was an idea that we added during the process of building the water fountain, which was constructed by Slavens.”

Winkler told the Free Press that the tree really added a lot to the project, but the fountain was the highlight. “It was great. It even had footlights to illuminate the water spray.”

But the fountain was not to last.

“Problem was the kids,” he recalled. “They would not leave it alone. They added soap to the water to make lots of bubbles and it ruined the pump.”

After several incidents and repairs to the pump the fountain was abandoned. Today the circular fountain serves as the backdrop for the garden bed maintained by the city.

“They called my grandfather ‘The First Cortez Landscaper on Main Street,’” said Gary Slavens in an interview with the Free Press. He remembers his dad, Dale Slavens, and his grandfather discussing the construction details of the decorative Lions Club fountain. “George Kelly, the horticulturist who lived in McElmo Canyon, was involved, too,” he explained.

It was one of several local Lions Club projects in the 1960s when he was in high school. “They hoped to complete it in a few months,” he said, “and when it was turned on I remember it shooting way up in the air. People really appreciated the fountain spray.”

“We recognized that we could im prove things. By working together we were able to do some things to beautify the city, pull ourselves up after the war [WW II]. The whole town came out when Basil dedicated the fountain, all of us — about 4,000 people.”

She told the Free Press that the water was a metaphor for the founding of Cortez. “It’s a land-development town. It couldn’t develop without water and so after the irrigation projects, farmers and ranchers began to locate in the county and Cortez became the supply hub for the community. It was the big issue in those days and so the fountain was an important addition to our Main Street. In those days that split in the highway — the West Y— was the heart of the county. The fountain symbolized that. It was a significant project.”

But according to Lions Club secretary/ treasure Irene Aldaz, the city didn’t approve of it. Lions Vice President Kathy Kester said the county didn’t, either, “They weren’t supposed to build it because the tree would block the view for traffic.” But they did it anyway, said Aldaz, and the town appreciated the project.

The Cortez Lions Club was founded in 1942. It is an affiliate of the Lions Clubs International, the largest service organization in the world with 1.4 million members in more than 46,000 clubs worldwide. The Cortez club sponsored the Dove Creek Lions

Although membership in the organization was thriving in Basil Slavens’ day, it is declining today. The trend puts many historical records of the club’s service projects at risk. Facts are hard to check. And the membership is aging. The only member involved in the water-fountain project still living is Winkler.

“New presidents traditionally inherit the record from the previous presidents,” said Aldaz, but in recent years, with only nine members, the records are scanty. She was unable to find a record of the fountain project that could verify the date of the construction. Winkler was present on the crew then and vividly recalls the group enthusiasm for the project. But the late ’50s date he ascribes to it falls vaguely between the mid-’60s suggested by Slaven’s grandson and Head’s recollections.

As the Free Press initiated interviews about the water fountain, stories grew about other projects in the city, all of them contributing to a healthier, more attractive town, but none could be confirmed or dated exactly because the records are minimal and membership is dwindling.

Montezuma Park, the lively summer location for the Cortez Retail Enhancement Association’s Third Thurs market, was originally built by the club, said Winkler, and donated to the city. It was the first park in Cortez.

Today its stately trees provide shade for families and events in a peaceful location two blocks from Main Street on North Market and Montezuma Avenue. Record numbers of vendors and attendance at the CREA events have renewed attention for the gracious setting. The Lions Club recently dedicated a new green bench to the members who built the park, but there is no date is on the plaque.

The Lions Club erected a booth at the August CREA Market, hoping to attract some interest in the local all-volunteer organization. Marcy Aldaz, current president, told the Free Press that they are organizing an outreach effort to collect stories of past Lions Club projects because they represent a foundation of facts about city history. As an example, he said, the beautification project the city is undertaking today rarely acknowledges past community efforts that the club and other volunteer groups initiated.

According to a recent press release, the Lions Club projects have been many and varied. Some prominent ones include spearheading the funding for the first swimming pool in Cortez as well as the first hospital. The club built the birdhouses at Hawkins Preserve, and funded Cortez City Park and the large pavilion with several picnic tables and benches at Centennial Park. They also provided the fully equipped kitchen at the Montezuma County Fairgrounds and also at the county annex, which is used by the senior citizens.

The club also supports the Kid Sight Program and provides assistance to individuals unable to afford eyewear. Grants have provided up to 24 pairs of glasses annually, a Lions Club brochure states.

President Aldaz hopes to elicit interest in membership to continue these programs. It is hard to imagine how they can go on without volunteer support, he said. In 1993 they had 12 members, and now they’re down to nine.

Winkler said the water fountain “was a clean-up-America project and we did that with so many little projects over time.” It was a vigorous time for the Lions then. After they finished the hospital the administrator would call them and ask for help with things like repainting the hallways, or repairs – changing light fixtures, or fixing window trim. It was a time of true volunteer work. None of the members wanted credit for what they did, and that may be part of the records issue.

The water fountain, now a garden feature on Main Street near the west end of the future new median, is an historic marker. Today the triangular piece of land is engulfed in burgeoning traffic at the intersection. Visitors to the minuscule-park must be vigilant crossing the multitude of streets surrounding it, but once there, they may find the former fountain, now garden planter, a surprise. Large embedded sandstone markers outside the sizable rock structure are carved with directive letters: E, S, W and an arrowhead pointing north. There is a commemorative brass plaque there, too: “Built and donated to the city by the Cortez Lions Club.” It lists no names, and is not dated.

Aldaz is hoping that families of past Cortez Lion Club members may have photos or stories and will contact the club through its website to share the information. “There are probably some aging members who do remember the work they contributed to the town long ago. I hope they call us soon,” said Aldaz.

It was always the project, said Winkler, not the individuals, that mattered in those days. And there was always a project to do. The Lions Club honored Winkler with a life-time membership after 50 years of service to the Cortez community.

For more information on the Cortez Lions Club, or to contribute facts and stories to their record, call Irene Aldaz at 970-565-3830, or visit their website at www.e-clubhouse.org/sites/