An ode to nurses

During these strange and stressful times, there are many heroes, a wide range of people in service including delivery people, cashiers, farmers, nurses, doctors, bank tellers, EMT’s, firefighters, police, doctors and nurses, and I am sure I probably missed a few. I would like to highlight and express gratitude to all, but especially nurses today.

I was recently asked, “What do we know about the flu pandemic as it affected our little town of Mancos or even Montezuma County in 1918?” I searched but could find little on the subject. What I did find was an article appearing in Slate Magazine in February of this year by Rebecca Onion, that perhaps addressed a reason and offered a look at the role of women as nurses throughout that pandemic. I highly recommend the read.

My intention is not to be grim with this piece, but rather offer a bit of an inside look at another time in history, and honor nurses. I saw some similarities to the present day. We are in the grips of another pandemic. Stay safe my friends; stay home. Follow protocol. This too will end. I send this out with a big dose of love. 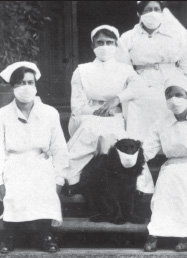 When looking at the Spanish Flu epidemic of 2018-19 I realized that it wasn’t until very late in the 20th century that attention was turned to this devastating pandemic or very much written about it. It seemed to fade from American memory and with it the valiant effort of American nurses during the pandemic. In the years following its devastation it seemed to escape the notice of historians. What was it about the flu that provoked this silent response? Is there something about mainstream American culture, with its optimism and pride, that simply refuses to reckon with the idea of mass death from an unstoppable illness? A close look at recent history suggests that maybe the 20th century silence about the flu epidemic of 1918-19 shows how uneasy many Americans have been with failure, death, and loss, and how strongly most of the nation seems to prefer stories that celebrate heroic achievement.

The dominant focus of most historians during this time was on change over time and the political, economic and intellectual process that explained those changes. Remember, this scourge came just at the end of WW I. There was indeed much change happening. Or, was it because the unsung heroes without a doubt of this pandemic were women as Ms. Onion asks?

A look now at how nurses served our country during this time. Between 1917 and 1919, over 10,000 nurses served on the Western Front. More than 1,500 nurses served in the U.S. Navy during this period and more worked directly with the American Red Cross. The Red Cross operated hospitals to care for casualties of this war staffed by nurses caring for casualties of war. Thousands more served in the U.S. Army Nurse Corps and while American Expeditionary Forces were still in the preparation phase to go overseas, U.S. Any nurses were sent ahead and assigned to the British Expeditionary Forces. By the end of June 1918, there were more than 3,000 American nurses spread out in over 750 British run hospitals.

In that same year, a strain of killer influenza, known as the Spanish flu, caused a global pandemic. It spread rapidly and killed indiscriminately. It is reported that at least 10 percent of patients perished. It was the deadliest in history. It infected 500 million people worldwide. This is approximately one third of the planet’s population. It killed an estimated 20 million to 50 million victims and 675,000 of those were reported to be Americans, Far more than the 53,402 who died in combat in World War I. There is speculation that the coronavirus may surpass this. The Spanish flu was first observed in Europe, the U.S. and parts of Asia before spreading swiftly around the world. There were no effective drugs to treat this killer, similar to the unknowns we are experiencing currently. People were ordered to wear masks, schools, theaters and businesses were closed as this virus carried out its deadly march across the globe. No one was truly safe. President Woodrow Wilson contracted it while negotiating the Treaty of Versailles in the early part of 1919.

Interesting that the “Spanish flu” was actually a misnomer. Spain was a neutral country during the was and while Allied and Central Powers nations bypassed news of the flu to avoid affecting morale, the Spanish media reported on it in detail. News of the flu first made headlines in Madrid in May 1918 and coverage only increased after King Alfonso the XIII of Spain came down the a virulent case about a week later. Since nations under the media blackout only read accounts from Spanish news sources, the assumed that Spain was the source. Hence the name, Spanish flu. Later research has suggested that the starting point of the epidemic was probably American military bases in Kansas!

With the outbreak of this pandemic the realization that nurses were the front line medical professionals was brought to the international forefront. The status of nursing was raised and their critical role in health in general, in community and public health, was also much more visible. They had long been overlooked for the extraordinary work they did as caregivers fighting disease and providing both physical and emotional support for those suffering. Because of the nurses serving in or lost to the war, when the pandemic broke out there was a shortage of nurses here on the home front. Contributing to this was the fact that nursing schools had remained predominantly white, almost exclusively female and Black candidates had only limited access to nursing education or employment. Prejudices limited the supply of skilled nurses at a tie when they were most needed.

This resulted in a new two-track system of training for nurses. Practical nurses received a shorter course of training and were mainstreamed to support and supplement the Registered Nurse. Hospitals were filled to capacity and much care actually took place in the home. The influenza of 1918-19 was most certainly a disaster world wide but it did highlight the great importance of skilled nursing at times of peace as well as war. It also highlighted the importance of public health planning. We are fortunate here in Montezuma County to have a wonderful Public Health Department. Many thanks must go to them for the excellent work they do in time of crisis and always.

History teaches us that preparation for a potential public health crisis must include that nurses, and all medical professionals and first responders, have resources and support to help as only they can. We are ever grateful to all of those on the front line. Important to note here is that nursing is not longer an exclusively female career and there are many highly skilled and dedicated male nurses today. Big dose of gratitude to all of you. THANK YOU.