The war between people and germs is as old as humanity itself. For a little while, in the heady days following the widespread introduction of penicillin in the 1940s, it looked like humanity might score a decisive victory against the bacteria that cause suffering, illness, and death.

Then the resistance began.

Today, it’s widely recognized that the war will never be completely won, for as soon as an antibiotic is discovered, bacteria begin to evolve that can survive against it.

“Resistance is never far behind the introduction” of a new antibiotic, said Dr. Katherine Fleming-Dutra of the Centers for Disease Control, in a presentation Jan. 25 to medical practitioners at the Sunflower Theatre in Cortez. “This is going to be a constant battle.”

Fleming-Dutra, a pediatric emergency- room physician who works with the CDC, was speaking in the second part of a four-part series about antibiotic resistance put on by Southwest Memorial Hospital. The hospital, its management company, Southwest Health System, and hospital pharmacist Marc Meyer have launched a major effort to promote the awareness of antibiotic resistance and “antibiotic stewardship,” the proper use of antibiotics.

“Back in Atlanta [home of the CDC], we’re really excited about what you’re doing,” Fleming-Dutra told her audience.

In 2013, the CDC estimated that antibiotic resistance caused 2.05 million illnesses and 23,000 deaths annually in the United States. “It’s one of the most pressing public-health threats of our time,” Fleming-Dutra said.

For years, concern has been mounting about the proliferation of antibiotic-resistant bacteria and the shortage of new drugs to combat them. Today there are antibiotic-resistant strains of tuberculosis, pneumonia, meningitis, sexually transmitted diseases, MRSA, and many more illnesses. In the days before the discovery of penicillin, people frequently died from bacterial diseases and from cuts, bites, and other puncture wounds that became infected. The advent of antibiotics seemed miraculous.

But now, human beings’ vulnerability to bacterial infections may be creeping back as existing antibiotics become less and less effective.

Overuse and misuse of antibiotics greatly exacerbates resistance, and there is a growing call to make sure they are used appropriately. For instance, about three-quarters of antibiotics sales in the nation are for use in livestock, and producers are being encouraged to reduce that.

Fleming-Dutra addressed the use of the drugs in outpatient settings, where 80 to 90 percent of use in humans occurs. 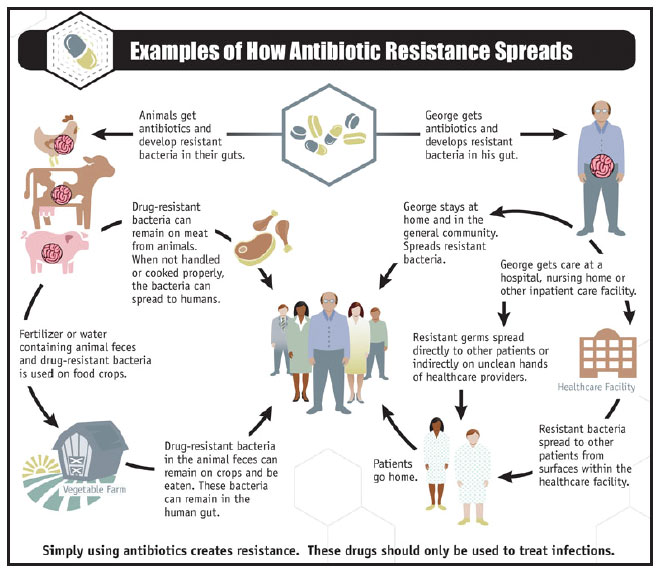 In the United States, there are big differences among states in how often antibiotics are given out. Lower rates tend to be in the West, with Alaska’s rate the lowest, while the state with the highest rate is West Virginia.

Fleming-Dutra said there are clearly differences in populations among states and among different countries, but they aren’t so different that the U.S. should have a rate more than twice as high as Sweden’s.

“That suggests we have some room to improve,” she said.

Why are the drugs prescribed? She said in 2010-11, sinusitis was the No. 1 reason for adult antibiotic prescriptions in the United States, with 11 percent of the scrips being written for that purpose. Five percent were for bronchitis and 5 percent for viral upper respiratory infections, she said, and antibiotics generally should not be used for those conditions because they are ineffective. Antibiotics do no good against viruses, which cause illnesses such as colds, flu, hepatitis, polio, rabies and more. They are effective only in combating bacteria. (Viral infections can sometimes be treated with other drugs or prevented with vaccines, but sometimes, as in the case of colds, they simply have to be endured until the patient can fight them off.)

Fleming-Dutra said it is estimated that 30 percent of antibiotic prescriptions are written unnecessarily, when the drugs will be useless.

The effort to use the drugs more judiciously has had some effect, she said. From 2011 to 2014, their use decreased 5 percent across all ages; however, most of that drop occurred among pediatric use, while adult use did not really change.

In contrast, the dangers of antibiotic overuse are very real. Many people may experience bad reactions and negative side effects from the drugs.

Worse, about 14,000 people a year die from intestinal infections caused by a type of bacteria called clostridium difficile. C. diff is most likely to infect hospital and nursing-home patients being given long-term treatment with antibiotics, which kill the good as well as bad bacteria in their digestive tracts. C. diff infects about 250,000 people annually, and Fleming- Dutra called it “an urgent threat.”

Also, she said, there is a growing concern that antibiotics adversely affect the “microbiome,” the collection of good bacteria and fungi that share the human body. The use of drugs called macrolides, of which Zithromax is the most common one, are particularly disturbing to the microbiome. She said a study found an association between antibiotic exposure in childhood and juvenile idiopathic arthritis, though no cause-and-effect relationship was proven.

She said medical providers often feel pressure from patients to prescribe antibiotics. However, studies involving parents with sick children found that the parents were generally satisfied even without a prescription if they were given a contingency plan (“Come back in three days if this doesn’t get better”) and positive steps to take to make their child more comfortable.

Another factor may be habit, she said. A study of 1 million outpatient visits to Veterans Administration clinics found that the 10 percent of providers who gave out the most antibiotic prescriptions did so for a whopping 95 percent of their patients with respiratory infections. Many of those respiratory infections would not require those drugs, Fleming-Dutra said.

She said antibiotics are certainly appropriate to treat many conditions. The key is to make sure they are prescribed only when needed and that the correct drugs is given for the right dose and the right amount of time. Guidelines for duration of treatment are growing shorter for some conditions, she said.

The CDC has a goal of reducing inappropriate antibiotic use by 50 percent by 2020, she said, and efforts such as the one being led by Southwest Memorial are helping in that effort.

“You’ve got a great health system that is already really leading the way in stewardship,” she said.

To find out more about antibiotics and the CDC guidelines for prescribing them, go to www.cdc.gov/getsmart. Contact the Southwest Memorial Hospital pharmacy at 970-564-2190.