Artist Keith Hutcheson’s vision of the outdoors
Chappell says county is concerned about locals
Helping Native Americans to be heard
Medical marijuana on federal lands: What are the regulations?
Still bogged down over roads and travel in Boggy Draw
‘Two Spirits’ will get a national airing on PBS
Will the wolverine be restored to Colorado?

Blowing in the wind: Why renewable energy is slow to catch on in the region
Bluff, Utah, says no to centralized wastewater treatment
Fruits of their labor: Day workers plan an enterprise garden

Golden fleeces: The role of sheep in Native culture
How to manage Colorado’s roadless areas?
Living with the legacy of uranium on the Navajo Nation
Reflections on the 10th anniversary of a hate-crime killing in Cortez 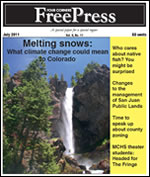 Classic sound: An Alphorn will echo as Music in the Mountains takes off
MCHS theater students head to Scottish festival
Melting snows: What climate change could mean to Colorado
Quirky flicks and moving manifestos: Shonto Prep’s young artists love creating multimedia works of art
Who cares about native fish? You might be surprised

A cultural resource: Cortez center is a museum, a gallery, an entertainment hub and much more
The historic battle over access to a desert creek

Costly claims: The fight over RS 2477 roads
The long, hot summer: Drought hits parts of the region
No place like home: A slow economy inspires tourists to enjoy their own backyards
Warmer temperatures may hurt trout, help native fish 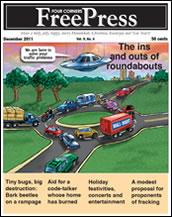 Aid for a code-talker whose home has burned
The ins and outs of roundabouts
Sudden Aspen Decline appears to be on the wane
Tiny bugs, big destruction: Bark beetles on a rampage