At Dachau, birds and a warning 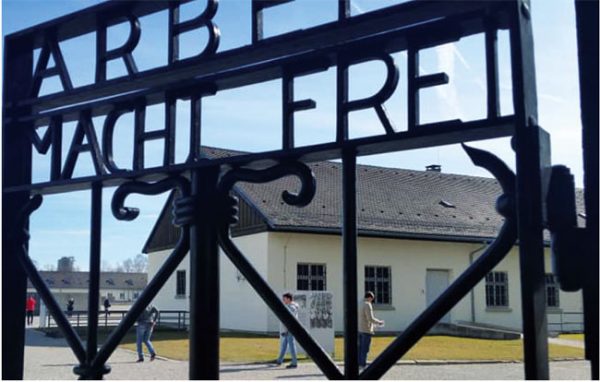 A reconstructed gate at Dachau prison camp. The original is locked inside the museum after being stolen in 2014 and recovered. “Arbeit macht frei” means “work makes (you) free.” Photo by Katharhynn Heidelberg

Albert told me the weather is always dreary when people go — cold, rainy, gray. Given my friend was speaking of the concentration camp at Dachau, it seemed fitting that the sky above would reflect the grim reality below.

It was sunny. It was March 3, and when I walked through the gate declaring “Arbeit macht frei” at Dachau, it was sunny and warm and the birds sang.

They sang then, too. When the Nazis began bringing Jews, gay people, Poles, Gypsies, Jehovah’s Witnesses and other hapless scapegoats to their death camps, the birds sang. The sun shone. Nature ground on, while below, the lives of people who’d been demonized as “other” were taken.

On March 3, 2019, it felt wrong. Because I was standing in the place of one of the greatest wrongs in human history. There, the museum is so packed with information, it cannot all be absorbed:

Prisoner Jean Bernard contradicts the “well-nourished” part: “There are other things you can eat. First there are dandelions. … Unfortunately, there are only a few of them at our worksite.”

Another prisoner account tells of a guard tempting him with a sausage and potatoes at Christmas, then informing him he is unworthy of such a meal.

“And imagine, the Americans came in,” the transcript of an oral history states. “…. And then they found this train with 3,000 corpses. And they found the corpses by the crematorium too. … There were Americans who said to me, ‘Now I know why I am fighting this war’.”

There are two crematoria. The larger one is in “Baracke X,” near wooded grounds where four British women who parachuted in as part of the resistance were shot. (Many others also were murdered there.)

The crematorium was built in 1940, outside the prisoner’s camp. I saw the ovens and gurneys. I realized that where I stood, above me, people had once been hanged. I stepped quickly into the next room. It had a low ceiling, with vents in the wall and the ceiling.

I’d walked into the gas chamber. And people were posing for photos, because, as deep as they were into history, they were deeper into the “capture it on camera” mode.

I got out as fast as I could.

The victims of the Holocaust were not just abstractions flitting through the pages of history books. These were people who loved pets, their children, their homes, hobbies. They were people.

And we need to hear them.

“The modernization of society. . . evoked fears and resentment,” reads a placard at Dachau’s museum.

“The opponents of modernism rejected the cultural diversity of an open society. Instead, they strove toward a ‘national community’ of cultural uniformity achieved through authoritarian means. These ideas were interspersed with racist, and more often, antisemitic prejudices.”

When we read this, we have a duty to understand in terms of now, not just then.

The sentiments the placard referred to should sound familiar, because they are being played out in many places, including here at home.

No, we are not Nazis, and Nazism does not rule here. Nor is the situation anywhere near as dire as it is in other places. No, our president is not Hitler.

But he has a demonstrated authoritarian bent and we’ve plenty of disaffected people who blame the “other.” We have leaders who do not hesitate to whip up the masses against immigrants. The president even screams about building an actual wall and has circumvented Congress’s constitutional control over the public purse — a chilling violation of the separation of powers.

Attacks on the press, on courts, on any institution that can offer even a tepid check of the potential dismantling of our republic — all are increasing. Almost two summers ago, we had actual Nazis marching in the streets of Charlottesville, and Heather Heyer was murdered.

Don’t overlook the ongoing war against asylum, which is fervid in painting classes of people as “other,” and targets brown-skinned people almost exclusively.

It is not illegal to seek asylum. If your sons were forced to join drug gangs; if your daughters were raped and trafficked; if your husband was murdered; if your life was threatened, you, too, would flee — even if seeking asylum was illegal. You would not patiently wait “in line” for the years-long process of immigration. Because you would die first.

Yet our government ramps up the rhetoric. It has taken steps that in the long run will worsen what is driving asylum- seeking (by cutting aid in the places from which people are fleeing).

It has built camps in our deserts for migrant children.

It has lost track of children courts have ordered to be returned to parents (while somehow it is able to keep track of journalists reporting on the situation). Children have died, even if they have not been tortured and murdered.

Still, people spout the same line: That it’s the parents’ fault for bringing their kids to the border.

It may be comforting to believe that. But it is nonsense: Once this country takes possession of these children, it becomes completely responsible for what happens to them. Period. Those who are uncomfortable with that reality could do with some introspection.

Dachau is a good place to start.

But even that might not be enough. When people think of the Holocaust, many seem to draw only the lesson as it pertains to Jewish persecution. They see plainly that this is wrong.

They fail, though, to draw the broader lesson necessary to prevent fear-mongers like Hitler from rising to power again — even as they chant, “Never again.”

On this same trip, a man indicated to me that he was OK with gay people being assaulted because they are gay, and also said a Muslim congresswoman could not be a patriotic American.

There, the sun shines. The birds sing.

And a memorial declares: May the example of those who were exterminated here between 1933 – 1945, because they resisted Nazism, help to unite the living for the defense of peace and freedom and in respect for their fellow men.

Katharhynn Heidelberg writes from Montrose. She cried when she typed this column’s final line. All the same — everyone should go to Dachau.