Back and forth?: Trump shrank Bears Ears. Will Biden return it to its original size? 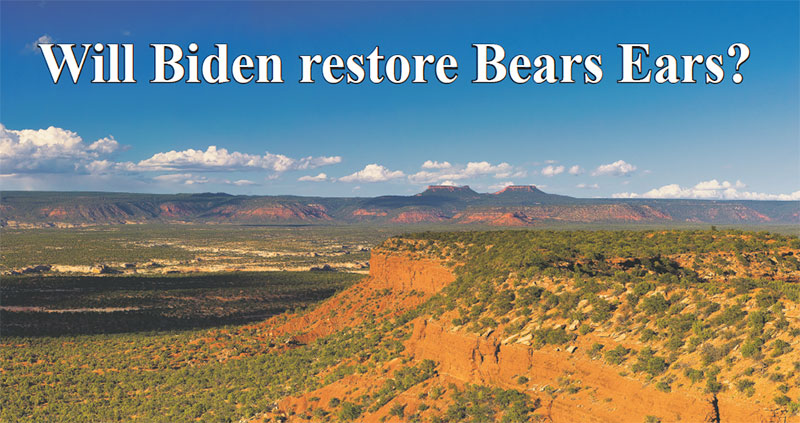 The distinctive buttes called Bears Ears, for which Bears Ears National Monument in Southeast Utah was named, are seen here from Moss Back Mesa. President Obama created the monument in 2016. President Trump greatly reduced its size. When he takes office, President Joe Biden may return it to its original boundaries. Photo by Tim Petersen

“As President, Biden will take immediate steps to reverse the Trump administration’s assaults on America’s natural treasures, including by reversing Trump’s attacks on the Arctic National Wildlife Refuge, Bears Ears, and Grand Staircase-Escalante.”

That’s what the Biden-Harris Plan for Tribal Nations states on the campaign’s website.

As established by President Obama on Dec. 28, 2016, Bears Ears National Monument included 1.35 million acres – over 2,000 square miles – of federal lands in Southeast Utah. The designation allowed for existing land uses to continue, including oil and gas exploration, timber harvesting and grazing, as well as hunting, fishing and outfitting. Off-highway vehicles and mountainbike use was allowed on approved roads and trails.

But any new development was curtailed under the monument designation – new roads cannot be built within a national monument, except for public safety or conservation use, nor can new oil and gas development, timber harvesting or new trails be established.

The monument designation was controversial in this regard, and Bears Ears became a campaign issue for candidate Donald Trump in 2016. Almost a year to the date after the monument was established, President Trump followed through on his campaign promise to reduce the protected acreage, eliminating 85 percent (201,876 acres) of the monument.

Much of the land Trump excluded was rich in oil and gas deposits.

Approximately 109,000 acres were state trust lands held by Utah’s School and Institutional Trust Lands Administration (SITLA). These lands are not subject to national monument designations anyway. Trump’s 2017 proclamation directed the Department of the Interior to see about swapping these SITLA lands with other state lands of similar value, so that federal agencies could manage them instead of SITLA.

The Trump administration’s intent to open up these protected lands for new oil and gas development was controversial. Backroom dealings between Utah Sen. Orrin Hatch and then-Interior Secretary Ryan Zinke outlining which lands were richest in coal, uranium and oil deposits and suggesting the new monument boundaries that Trump used- in order to allow the development of these mineral rich areas (See the February 2020 Free Press article https://fourcornersfreepress. com/what-does-the-future-holdfor- the-bears-ears-monument/).

Trump’s reduction of Bears Ears was challenged in federal court by 24 different entities that claimed the president had exceeded his powers by reducing the monument’s acreage, and that only Congress has the power to do so.

“The Bears Ears lawsuit has been fully briefed and is waiting for a decision from the judge, which could come out any time,” attorney Landon Newell of the Southern Utah Wilderness Alliance (SUWA), one of the organizations participating in the suit, told the Four Corners Free Press. The judge is Tonya Chutkin in the district court in the Washington D.C.

To date, the Bureau of Land Management, the agency responsible for the majority of the lands excluded from the monument in 2017, has not offered up any oil and gas leases for sale on original Bears Ears lands. The BLM is close-mouthed about any plans the Biden administration may have to reinstate the original boundaries. Monument manager Jacob Palma declined to comment on the issue.

Kimberly Finch, communications director for the Utah State Office of the BLM, sent an email to the Free Press at the end of December stating the following:

“As is our standard practice, we do not speculate or comment on gossip or other people’s speculation on any issues, including national monument boundaries. Presidential proclamations are issued from the White House, and we do not speak on behalf of the White House. At this time, there is no legislation on monument boundaries that is being considered by Congress, and the 116th Congress will conclude in the next week. Any new legislation will need to be reintroduced by the 117th Congress. Until any changes are officially made by the President or by Congress, we will continue to follow and implement the current management plans, laws, policies, and regulations.”

However, SITLA sold six oil and gas leases on Oct. 23, 2020 – leasing units 26, 29, 30, 31, 32 and 33. Nine leasing units offered for auction were in San Juan County, and four of the leasing units sold are within the original monument boundaries established by Obama but eliminated by Trump. 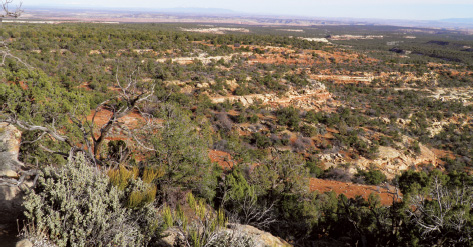 The future of the Bears Ears landscape remains in question. Photo by Tim Peterson

According to a Dec. 26 Salt Lake Tribune article by Zac Podmore, SITLA received a total of $11,800 for the four leases that include 2,460 acres, with three of the leases selling just over the minimum bid of $2 per acre. Buyers were Kirkwood Oil and Gas out of Cody, Wyo., a company specializing in buying oil and gas leases, and Wolcott LLC from Grand Junction, Colo., a “land services” company which specializes in handling “all aspects” of land management, specifically for oil and gas and mining industries.

All of the lease units SITLA sold in October 2020 had the following special stipulation: “Archaeological area: leasing unit contains or is adjacent to archaeological sites with a fairly high probability that additional sites could exist.”

Leases sold have a term of five years, with leaseholders paying a rental fee of $2 an acre, and have a royalty of 16.67 percent – meaning that if the companies buying the leases do drill and produce oil, gas or helium, their agency beneficiaries would receive 16.67 percent royalty from the sales of those products.

SITLA was created in 1994 by the Utah legislature and given the task of managing Utah’s trust lands. Trust lands were Thomas Jefferson’s idea. He thought that public education is a key component of democracy, and proposed that every state entering the Union should have land set aside to support public schools. Accordingly, Congress granted 3.4 million acres to the state of Utah at statehood in 1886, with the provision that any revenues generated from the lands should be used for permanent endowments for 12 specific institutions.

Since 1994, SITLA has generated income through real estate development, surface estate sales, oil and gas leases – including rent and royalties – and has generated $1.96 billion of revenue which, through the permanent endowments, has grown to $2.5 billion today.

According to its website, “The agency’s main goal is to maximize revenues from the land it manages. One way the agency maximizes revenues for its beneficiaries is through leasing its property for commercial purposes.”

The land exchange is in limbo, complicated by the fact that nobody knows what the Biden administration will be able to do about the monument’s boundaries, and how this will impact the land swap in Trump’s proclamation, especially since now some of those SITLA lands have been leased. One possibility is that SITLA will have to refund the money to the buyers of the leases and cancel the leases.

The SITLA parcels in question are located about ten miles north of Bluff, but according to Podmore’s article, Mayor Ann Leppanen was not notified of the lease auctions until all units were sold.

Meanwhile, at their Dec. 1, 2020, meeting the San Juan County commissioners passed a resolution calling upon Biden “to take immediate action to restore the Bears Ears National Monument” once he assumes office. The two Native commissioners, Willie Grayeyes and Kenneth Maryboy, voted for the resolution, while Bruce Adams did not.

When contacted by the Free Press by phone, Commissioners Grayeyes and Adams were both unwilling to comment on the matter. Adams said that there’s been so much written about Bears Ears that he didn’t think people really cared any more, and Grayeyes told this author to “do your research.”

Newell of SUWA told the Free Press that “quite frankly the expectation is that the Biden administration will reestablish the former Bears Ears boundary, as well as the Grand Staircase-Escalante.”

Utah Diné Bikéyah, (“people’s sacred lands” in Navajo) is a non-profit organization with a mission to “Preserve and protect the cultural and natural resources of ancestral Native American lands to benefit and bring healing to people and the Earth.” This group is an intertribal coalition of indigenous people who, among other goals, are working to restore the original boundaries of Bears Ears.

The coalition was instrumental in petitioning Obama to establish the original monument in 2016, and continues the efforts to gain recognition and respect for sacred lands. According to their website, healing is a core value, “achieved through the process of strengthening our ties to the land, practicing our Native cultures and languages, and treating one another with respect. We believe these values are mutually self-reinforcing by nature.”

The organization is active in promoting native values and activism, and a petition to Biden urging the restoration of the original BENM boundaries can be found on their website. https://utahdinebikeyah.org/petition- to-president-biden/

“It’s always been a tribal-led push to protect the Bears Ears,” Newell said.

In the Four Corners region – remote but frequently in the national spotlight because of the conflicting interests of residents and outsiders – many do hope that President Biden will restore Bears Ears to its original boundaries.