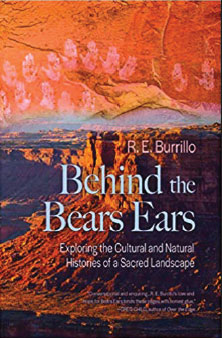 Four Corners area readers will find much to appreciate in Burrillo’s account of the human history behind the magnificent landscape in southeastern Utah preserved by the Obama administration in 2016.

The proposed reduction of Bears Ears National Monument — a direct affront to the Inter-Tribal Coalition of Ute Mountain Ute, Navajo, Hopi, Zuni, and Ute peoples who led the charge to create the monument—currently is wending its way through the courts. In the meantime, Burrillo provides readers an insider’s look at what makes Bears Ears sacred to local tribes, and fascinating to archaeologists and culturally inquisitive tourists alike.

Burrillo uses his archaeological chops and his easy gift of gab to share with readers the region’s human history, from 10,000 years ago to the present, in wholly approachable fashion.

One example, among many, is his comparison of rudimentary pit houses—naturally insulated shelters dug into the ground by early Ancestral Puebloans who lived in the region — to root cellars and sod houses dug by colonizing European Americans who entered the Great Plains from the East in the 1800s.

The advancement of Ancestral Puebloan culture between AD 800 and 1200 often focuses on the move from early pit houses to above-ground, stone-and-mor tar dwellings tucked beneath overhanging cliffs. It’s as if, Burrillo quotes National Forest archaeologist Peter Pilles as saying, on “April 3, at 5 o’clock in the afternoon, every single person jumped out of their pit houses, and began building pueblos—and became more civilized” as a result.

The truth, Burrillo explains, is much more complex. Just as root cellars remain in use in rural America to this day, Ancestral Puebloans used pit houses throughout their centuries in the Bears Ears region.

Burrillo recounts the steady population growth of the area, which roughly tracks the Chacoan epoch from AD 850 to the 1100s, followed by the depopulation of the region after decades of drought in the 1200s, and the gradual repopulation of the region by area tribes in the centuries that followed. He then moves on to a broad-ranging description and opinionated discussion of white European Americans’ so-called discovery of the Bears Ears area, and the looting and plundering—and, eventually, archaeological excavation and study—of the region’s ancient homesites that followed.

Burrillo is at his best when his narrative becomes personal. He offers detailed descriptions of his many forays in Bears Ears, both as a professional archaeologist performing site studies, and as a wide-eyed visitor exploring the enchanting canyonlands and ancient habitation sites of the Bears Ears region, including Cedar Mesa, Elk Ridge, and Beef Basin.

He admits his heartbreak at the Instagram- driven influx of tourists to the region, in the years since the monument’s establishment, that has led to ancient homesites such as House of Fire becoming “so popular—essentially serving as a sacrifice site for the rest of them, although you’re not supposed to say that in polite company—that cars will occasionally stretch down the highway for up to half a mile from the trailhead.”

Ultimately, however, Burrillo is clear in his appreciation for the monument’s creation, and the critical need to return the monument to its original size on behalf of modern tribal descendants of the ancient peoples who made the region their home.

Behind the Bears Ears is published by nonprofit environmental publisher Torrey House Press. (So, too, are my National Park Mysteries.) Torrey House was deeply involved in the initial movement to create Bears Ears National Monument, publishing a book of essays by tribal leaders, archaeologists, and environmentalists that explained the preservation value of the remote Bears Ears region to politicians inside the Beltway.

With Behind the Bears Ears, Torrey House is continuing its activist ways on behalf of the region, allowing Burrillo’s engaging voice to tell the story of Bears Ears National Monument and its sacred value to an ever-widening audience.

Scott Graham is the National Outdoor Book Award-winning author of the National Park Mystery series for Torrey House Press. The sixth book in the series, Mesa Verde Victim, was released in August. Ordering information at scottfrankllingraham.com.