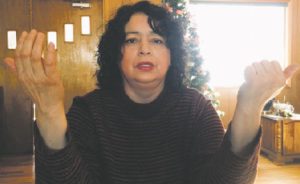 Rosa Sabido is shown in sanctuary in Mancos this 2019 photo. Photo by Janneli F. Miller

Rosa Sabido, a longtime resident of the United States who has spent the past four years living in a church in Mancos to avoid deportation to Mexico, may finally have a chance to be free.

U.S. Rep. Joe Neguse, a Democrat who represents Colorado’s 2nd District, has in­troduced a private bill that would provide Sabido with permanent residency and stop her from being deported.

Sabido was born in Mexico, but has spent most of her life in the United States. (https://fourcornersfreepress.com/living-in-exile-in-february-rosa-sabido-will-com­plete-600-days-in-sanctuary/)

Her mother, Blanca, who had divorced Sabido’s biological father when Sabido was 10, came to the United States in the early 1980s, and married Roberto Obispo, an ag­ricultural worker living in the U.S. as a lawful permanent resident in Cortez.

Sabido arrived in the United States for the first time in 1987 at age 23 to visit her par­ents. She obtained a visitor visa.

Obispo became a U.S. citizen in 1999, and filed papers that allowed Blanca to become a citizen in 2001. However, at that time, im­migration law did not allow Sabido to be in­cluded as a family member.

Sabido has sought for more than 20 years to become a legal U.S. citizen, but the laws and procedures are complicated. She re­portedly spent thousands of dollars on at­torneys. She held several jobs while in the U.S., most recently working as secretary for St. Margaret Mary Church in Cortez.

On June 2, 2017, Sabido sought sanctu­ary at the Mancos United Methodist Church because her attorney advised her that if she went to her next scheduled interview for seeking a stay of deportation, she would probably be booted out of the country.

“Over four years ago, Rosa Sabido sought sanctuary in the Mancos United Methodist Church,” said Pastor Craig Paschal in a press release. “Our church said yes because we be­lieve we are called to love our neighbors and stand in solidarity with the marginalized.”

Sabido’s mother died of cancer while Sa­bido was sheltering at the Mancos church. She unable to visit her. Sabido makes and sells tamales to earn money to help pay for her support, and people have contributed funds as well.

Paschal thanked Neguse for introducing the bill, H.R. 4936, into the House Immi­gration and Citizenship Subcommittee, of which Neguse is vice chair. “We thank him from the bottom of our hearts. We stand in faith as one,” Paschal said.

A private bill is one that provides benefits to specified individuals (including corporate bodies), according to an article by Christo­pher M. Davis, an analyst on Congress and the Legislative Process for the Congressio­nal Research Service. Immigration status is a typical topic for a private bill.

Such bills are commonly introduced by the member of Congress who represents the individual who would benefit, but of course that didn’t happen in this case.

Private bills generally are heard on specific dates each month that are designated for the Private Calendar.

In order for H.R. 4936 to pass, it would have to move out of the committee, be passed by the House, and then be passed by the Senate. A congressional tracking website said it is in the early stages and at press time was given a small chance of passage.