How is it I’m smiling so much as I think about Only the Good Indians, the novel I just finished reading? 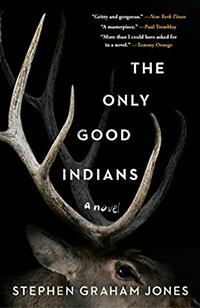 It’s set on the troubled Blackfeet Reservation in November, at the bleak start of the long, dark Montana winter.

And it features as one of its key plot elements a blood-soaked massacre during a hallowed sweat lodge ceremony.

The reason, then, that I’m smiling?

Because the author of Only the Good Indians, released last month after a covid-caused delay, is University of Colorado English professor and Blackfeet tribal member Stephen Graham Jones.

Jones long has used his wry sense of humor to write about modern Native American life from his insider perspective. He does so with extra vigor in Only the Good Indians, making his new release his best work of fiction to date.

The tale opens with four Blackfeet friends who allow their collective frustration to get the best of them on the final day of elk hunting season. Unsuccessful so far, they venture to a remote section of the reservation rich with elk set aside for tribal elders to hunt.

There, the four young men encounter a giant herd. In a burst of bloodlust, they gun down far more elk than they need or are entitled to, including a pregnant cow whose calf is still alive when they set about butchering the animals.

A blizzard sets in and law enforcement arrives, forcing the men to abandon most of the meat, a cardinal hunting sin compounding their frenzied slaughter.

Ten years later, the elk calf returns to Earth as a revenge-seeking human. The time has come for the Blackfeet friends to pay for their sins, which they do in increasingly brutal fashion.

Despite the grim plot of Only the Good Indians, Jones shares the inner worlds of his characters in joyfully informative fashion. Jones’ fully formed, good-humored characters take readers on a riotous stream-of-consciousness ride, addressing issues such as marriage to non-tribal members, the political correctness of the term Native American vs. Indian, the extreme devotion of Native Americans to the sport of basketball, and the predilection of tribal members to hang onto material possessions long past their sell-by dates, in case the items, née junk, someday prove useful.

The over-the-top violence in Only the Good Indians provides Jones the means to address the push-pull between tribal tradition and modern society. He uses the searing horror elements in his tale to at once indict and champion the old ways practiced by tribal elders, and to illuminate the challenges faced by young Native Americans living with one foot in the old world and the other in the new, making for an informative, if bloody, read for anyone interested in tribal culture today.