Blowing in the wind: Why renewable energy is slow to catch on in the region

Looking at resources alone, the wide open West is poised to be a breadbasket for the country’s ambitious renewable-energy goals. But finding places to put the necessary infrastructure is proving to be a trickier matter.

That’s partly because of a reality that is a bit counter-intuitive: Sure, renewable energy is “green” development. But tell that to the neighbor of a huge solar installation, its panels gleaming hot and black for acres and excluding wildlife that used to be common. Or the rancher whose vast tracts of land are now crisscrossed with power lines that buzz just like all the rest. Or the rural resident who’s savvy to the already numerous threats to bats and birds, and adds fatal encounters with wind towers to the distressing list. 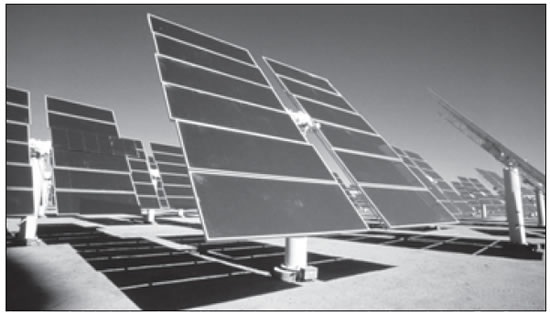 A number of obstacles have impeded large-scale renewable-energy developments in the Four Corners, although solar panels such as these are popping up in more places.

The greater Four Corners area, with its varied – and too-often mountainous – terrain, doesn’t start out ideal for the industrial- scale energy projects that will fuel the country’s green-energy needs. Factor in its culturally and environmentally significant areas, and the land that’s ripe for renewables shrinks even more.

When the Boulder, Colo.-based National Renewable Energy Laboratory started releasing its renewable resource maps two decades ago, the Southwest emerged as a gold mine – especially for solar resource potential. But that was before the Interior Department got hold of the maps – and overlaid them with habitat for endangered species, culturally sensitive areas, and lands that had already been sold or committed for development, among other restrictions.

The national effort to identify the lands available for solar is the National Solar Energy Development Programmatic Environmental Impact Statement (PEIS), now in the draft stage. So far, that effort has identified 24 solar-energy zones – places where, all known factors considered, development of large-scale solar resources is feasible, and a high priority. The zones surround, but neatly avoid, the Four Corners area. The nearest zones to the east fall into the San Luis Valley, and the nearest zones to the west are in western Utah’s Escalante Valley, and across the border with Nevada.

Beyond the national inventory, the BLM in each state has taken the lead on an even closer look at places where energy development could get the green light – and where, on the other hand, land has already been promised for development, where it’s likely to get caught in the mire of Endangered Species Act protections, where transmission lines are missing, or where water is limited for solar development, which requires ample water for cooling if it’s to be done commercially at a reasonable cost.

Sandy Bahr, director of the Sierra Club’s Grand Canyon Chapter in Arizona, gave most renewable-energy development so far a nod of approval, largely because the processes are focusing on lands that have already been disturbed.

“The bottom line is we want to see investment in renewables,” she said. “But that doesn’t mean you just put it anywhere.” The Sierra Club keeps a close watch on the new developments; most recently they asked the BLM to consider birds, bats and other wildlife in comments on a huge wind farm proposed for the Mojave Desert. But so far, developments closer to home – like the 120-megawatt-capacity Dry Lake Wind Power Project that opened last year between Snowflake and Holbrook, Ariz. – have been sited on lands that were fair game, from the Sierra Club’s perspective.

“These lands had livestock-grazing,” Bahr said. “It wasn’t in a major flyway. If there were cultural issues, they weren’t raised with us.”

A new proposal to site a 99-megawatt wind farm south of the Grand Canyon near Williams, called the Perrin Ranch Wind Energy Center, has also raised no alarm bells with the environmental community.

The Four Corners is a challenging place to site renewable energy. Its mountainous terrain is too high for solar, and in most places, cloudy days reduce the solar radiation that could make solar-power collection worthwhile for large-scale commercial interests.

Tom Heinlein, field manager for the BLM field office in Monticello that covers San Juan County, Utah, said large-scale proposals are unlikely in his area because of an “incredibly high density of archaeological sites that cover the landscape of southeast Utah and the difficulty involved in placing a commercial-scale development within an area of such significant, non-renewable, cultural resources.” He also noted that large-scale solar developments require flat sites, which aren’t typical in canyon country.

Some high mountain ridges in the region would be good for wind, including several in extreme northeastern Arizona and southwestern Colorado, especially Sleeping Ute Mountain. But all of those areas are on Native American land, and some of them – like Sleeping Ute Mountain – are sacred enough to prohibit development altogether.

The Ute Mountain Ute tribe has been considering wind development elsewhere on their land, and saving more than $4,000 a year by using photovoltaic solar panels to power a tribal water pump. That tribe, the Southern Ute tribe and the Jemez Pueblo tribe in northern New Mexico have all expressed interest in bringing large-scale solar developments to their lands, in the hopes that they’ll be profitable enough.

As of last year, renewable-energy installations in the Four Corners tribal lands added up to just over 500 kilowatts of capacity, including wind and solar projects at Hopi, the Navajo Nation, Southern Ute, Ute Mountain Ute and numerous Pueblo tribes in northern New Mexico. In total, that’s equivalent to the capacity of a three-plus acre, 2,700-panel solar array that will easily supply the power needs of the University of New Mexico’s Taos campus when it goes fully online this summer.

Tribal efforts are getting some help from environmental groups for the installations, but their relationships are fairly aloof with federal agencies around renewable-energy development.

When it comes to the lands in Arizona that are considered eligible for renewable energy development, “there’s nothing on the reservations,” said Dennis Godfrey, an Arizona BLM spokesman. “There was outreach and contact with the tribes, and… they’re just choosing to go their own way.”

Sam Woods, energy and policy advisor to the Navajo Nation President’s Office, said that’s a fair assessment. The nation employs an Energy Advisory Committee that is working on a comprehensive energy policy for the tribe and should have it completed sometime this spring, he said. “We are exploring opportunities in solar and wind, biomass and clean coal technology,” he said, pointing to a wind-energy deal that’s in the works at the Big Boquillas Ranch in northwestern Arizona.

But tribal renewable development could evolve at a slower pace outside the coordinated – and often better-funded – national efforts. And each tribe will face its own cultural and governmental challenges in making it happen.

For example, the central Navajo Nation government and the Cameron Chapter recently were at loggerheads over wind resources on Gray Mountain: Sempra Energy was planning to develop a 500-megawatt wind farm in partnership with the Cameron community – while the central government was working on a conflicting plan with Citizens Energy. It’s not clear yet how development there will proceed.

Power on the move

The communities of San Luis, Alamosa and Crestone, Colo., boast more than 1,000 solar systems between them, due in part to a rush of solar entrepreneurship in the 1970s. Solar infrastructure in the San Luis Valley has reached a capacity of 63 megawatts – enough to supply all the energy needs of its scattered 50,000 residents, wrote Ceal Smith, a member of the San Luis Valley Renewable Communities Alliance, in a High Country News essay last year.

But they’re not especially interested in sharing – especially if it means sacrificing their own area’s independence or character. Residents there organized opposition to Xcel Energy and Tri-State’s proposed, large-scale solar development in their back yards and a 95-mile line that would ship power from the valley through the Sangre de Cristo mountains to energy markets serving Colorado’s Front Range to the north. The opposition includes not just the infamous billionaire rancher Louis Bacon, but Smith’s Allliance and a separate group, the Transmission Line Coalition. Ceal and like-minded activists are pushing for so-called “energy sovereignty”: small-scale, community-based power that avoids large-scale transmission projects leading out of “energy sacrifice zones.”

Despite the backlash, the state Public Utilities Commission approved the transmission line last month. It will now start through an Environmental Impact Statement with the USDA’s Rural Utilities service.

“We are also concerned about a move on the part of the legislature to bypass county review of transmission,” Smith wrote in an email. “We don’t know the outcome on that yet but it passed the Senate last week.”

Closer to home, Tri-State Generation and Transmission Association is proposing San Juan Basin Energy Connect Project, involving a single, 230-kilovolt transmission line from the Farmington area to Ignacio, Colo. That project is just starting through the EIS process that will bring it under the public eye.

“Things have definitely picked up since 2006 in the local renewable-generation arena in La Plata and Archuleta counties,” said Mark Schwantes, manager of corporate services for the La Plata Electric Association.

Prior to 2006, the association had only installed 12 systems, for a total power capacity of 69 kilowatts. An average home draws a few kilowatts of power. But recent years have seen a boom – the area now boasts more than 250 systems, most of them solar photovoltaic – generating over a megawatt of power in total.

The Four Corners Office for Resource Efficiency, 4CORE for short, got going in the fall of 2006 with an office in Durango, and just hosted a grand opening for an office in Cortez.

Tillotson said increasing numbers of people are expressing interest in solar – but her first task is to encourage people to do basic energy audits and weatherization on their homes.

“We really try to encourage people to get the low-hanging fruit first in terms of energy efficiency,” she said. “Solar is sort of the Prius effect.”

If people don’t first replace windows with double-pane or even storm windows, get basic energy audits with an infrared camera to see the cold and hot spots, and switch to high-efficiency appliances, “your [photovoltaic] system is going to have to be really huge.”