Bookmobiles of the 1930s 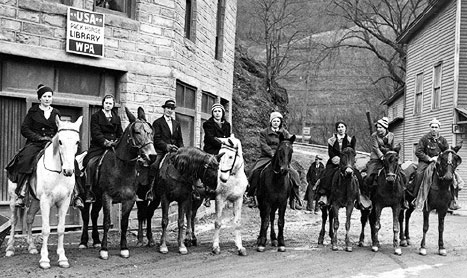 The Great Depression of the 1930s hit everyone hard, but the remote hills of Ap­palachia, where poverty was already ram­pant, was one of the hardest-hit areas. The rural mountains were isolated. The people living there had little or no access to jobs or education. They also lacked books: In 1930, up to 31 percent of people in eastern Ken­tucky couldn’t read. They had no means of escaping the vicious economic trap and they felt their survival was threatened.

President Franklin Roosevelt created the Works Progress Administration and the Pack Horse Library Initiative to help Americans become more literate so that they’d have a better chance of finding em­ployment.

The Pack Horse initiative sent librarians deep into Appalachia, where reading mate­rial was distributed to the people who lived in this craggy, rugged 10,000-square-mile area of eastern Kentucky. There were no real roads.

These dauntless horseback librarians were mostly women. They received salaries from the Works Progress Administration, $28 a month—around $495 in modern dol­lars.

These librarians would venture through muddy creeks and snowy hills just to deliver books to the people of these isolated ar­eas. These brave women on horseback rode out at lease twice a month and covered as much as 120 miles a week, regardless of the weather conditions. On occasion they would need to finish up their route on foot when the destination was in a location that was too remote for the horse to travel.

Nan Milan, who carried books in an eight-mile ra­dius from the Pine Mountain Settlement School, joked that the horses she rode had shorter legs on one side than the other so that they wouldn’t slide off of the steep mountain paths. Riders used their own horses or mules or leased them from neighbors. Roads could be impassable, and one librarian had to hike her 18-mile route when her mule died.

In 1936, Pack Horse librarians served 50,000 families, and, by 1937, 155 public schools. Children loved the program; many mountain schools didn’t have libraries, and since they were so far from public librar­ies, most students had never checked out a book.

“‘Bring me a book to read’ is the cry of every child as he runs to meet the librar­ian with whom he has become acquainted,” wrote one Pack Horse Library supervisor. “Not a certain book, but any kind of book. The child has read none of them.”

The Pack Horse Library ended in 1943 after Franklin Roosevelt ordered the end of the WPA. The new war effort was putting people back to work, so WPA projects—including the Pack Horse Library—tapered off. That marked the end of horse-delivered books in Kentucky, but by 1946, motor­ized bookmobiles were on the move. Once again, books rode into the mountains, and, according to the Institute of Museum and Library Services, Kentucky’s public libraries had 75 bookmobiles in 2014 — the largest number in the nation at that time.

For further reading about these amazing women I suggest the book Down Cut Shin Creek: The Pack Horse Librarians of Kentucky by Appelt and Schmitzer. It is a wonderful little read.

Margaret “Midge” Kirk is a slightly eccentric artist, writer, bibliophile, feminist scholar and hob­by historian who lives in the SW corner of Colo­rado. She can be reached at eurydice4@yahoo.com or visit her website www.herstory-online.com.