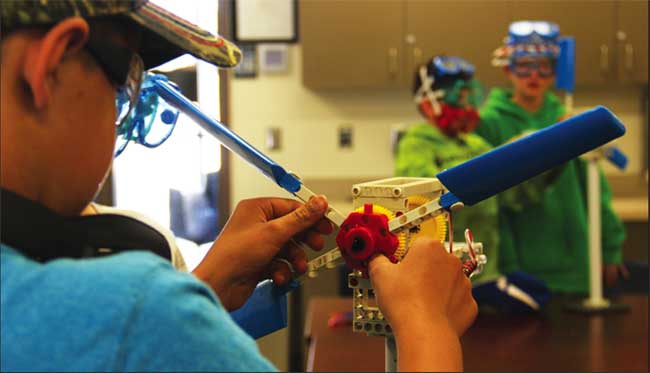 Students from across the Colorado Plateau have taken advantage of the educational experiences and adventures offered at the Discovery Center. Courtesy photo.

You’ve got family coming from outside of the region and they want to visit Bears Ears, or perhaps they want to go to Moab, but you’re not too thrilled about that idea. They’ve let you know they want to see some red slickrock canyons, petroglyphs, maybe some cliff dwellings. Or maybe you have school-age children and need to plan some summer activities. What to do?

It might be a good idea to head over to Monticello, Utah, and start out at the Canyon Country Discovery Center (CCDC).The new building, opened in November 2016, is right on Highway 191, near the Rodeway Inn and across from the Mountain View RV Park and Campground. At 7000 feet at the foot of the Abajo Mountains in Southwest Utah, the 48-acre piñon-juniper studded campus includes hiking trails, picnic areas, some outdoor exhibits, and an information and exploration center.

The mission of the CCDC, as stated on their website, is to create “lifelong learning experiences about the Colorado Plateau through adventure, education, and stewardship.” According to Seth Levy, chairman of the board of directors of CCDC, “Our role is encouraging people to discover the area and have learning and adventure experiences in the Four Corners region. A lot of people aren’t aware of what there is to see and do.”

Jeff Weinmeister, executive director of the center, agrees, “So often you talk to people and as you drive out of Monticello to Moab, they don’t know what we are and what we offer. It really is kind of a fun place for this region for people to go and see.”

The center offers pre-programmed outdoor adventures and educational opportunities, as well as designing your own trips. Want to go on a San Juan River trip?

“Just show up at the Discovery Center and that’s it,” says Weinmeister. “Our most popular river trip is two nights from Sand Island to Mexican Hat. Depending on the launch date, we either have 12 or 25 people that we can take. We offer tent and camping gear – sleeping bags and pads.”

Weinmeister explains that this is also his favorite trip. “It is an amazing experience, you get a really good picture of the different ecosystems and the different cultures in the area.”

The CCDC has river permits with the BLM and all trips are led by experienced river guides. Scheduled river trips for 2019 include Yoga on the River and San Juan River History with Andrew Gulliford. Other trips have included Bluegrass on the River and Storytelling with Craig Childs.

Or maybe river trips aren’t your thing and you’d rather take a guided day hike up Butler Wash, Mule Canyon or Comb Ridge. Besides day trips, the CCDC offers three-day base camp-hiking trips in Bears Ears.

“The reality of Bears Ears is that people hear about it because of the news but they don’t know where it is. It’s a place that nobody knows exactly where it is,” says Weinmeister. A Signature Best of Bears Ears Hiking Trip is planned for 2019.

The CCDC also offers corporate adventure retreats for your business or organization. You design the retreat in collaboration with CCDC staff, according to your needs. “We would highly recommend working with them and embarking on one of their trips. We hope to be able to do more work with them in the future!” That’s a quote from the Alpacka Raft Team on the CCDC website.

The Canyon Country Discovery Center was founded by Janet Ross, as the Four Corners School of Outdoor Education, in 1984. Ross attended and graduated Prescott College from 1971- 74, and fell in love with the Colorado Plateau.

Prescott College is a small liberal arts school in central Arizona, started in the 1960s by Congregational minister Dr. Charles Parker, who had a vision of creating the “Harvard of the West.” Parker wanted to continue the Congregationalist tradition of founding educational institutions, which over the years have included Middlebury, Dartmouth, Amherst, Smith, Yale, Oberlin, Grinnell, Whitman, Colorado, Pomona and Scripps, in addition to Harvard. The college’s mission is “to produce the leaders increasingly crucial to successfully meeting the challenges of the changing world” and they do so by stressing experiential learning and self-direction within an interdisciplinary curriculum.

As a result of her experience at Prescott, Ross says, “I discovered the power of place-based education and I wanted to live on the Colorado Plateau and make my living here. I decided to start a school that was dedicated to preservation and conservation.”

“Outdoor education was cutting edge at that time,” Ross says, and she wanted to provide more opportunities for the kind of experiences she had. “There are so few science education opportunities that are high quality,” she notes.

Ross moved to the Monticello area in 1977 and bought an old farm close to the Colorado border, in what is now called Eastland. Her property served as the base of the school for years, until the Discovery Center was built.

“It was never my idea actually to build a science center,” says Ross. “In the beginning, it was simply educational field trips – which are now called Southwest Adventures. That is all we did until the 1990s.”

But she realized that she wanted to build something that could live beyond her own involvement, and include her commitment to social change. “Running educational field trips was getting revenue, but we were not necessarily being an agent of social change,” she says.

“The first thing I came up with was a professional teacher training program,” says Ross. She and other interested community leaders wanted to create something that could be an economic driver for Monticello. They interviewed teachers all over the Colorado Plateau to see what their needs were, and out of this they invented the Bioregional Outdoor Education Project.

“We focused on place-based teaching and learning – using outdoor programs which enhance learning and education. The programs are teaching teachers how to teach differently in a way that would be more engaging to students,” she explains.

Ross’s dedication to high-quality outdoor education is reflected in the CCDC’s current educational and discovery programs. As listed on the website, “educational programs are developed for culturally diverse learners to explore and discover the natural history, landscapes, people, land use, astronomy, water and climate of the Colorado Plateau.” Educational programs focus on five themes: Life, Astronomy, Geology, Scientists, and Energy Use, all on the Colorado Plateau.

Students from all over the Plateau have taken advantage of the center’s offerings, with middle and high school classes from Kemper, Cortez, Dolores, Dove Creek, Montrose, and Grand Junction in Colorado, in addition to schools in Southeast Utah besides Monticello, including Blanding, Bluff, Montezuma Creek and Moab.

“This year so far, over 2400 students have utilized our programs,” says Weinmeister. “We have some schools that will come stay on the campus for a week. They can go on a three-day two-night river trip, then at the discovery center we have tent sites, and they can take part in our night-sky program, use our climbing wall, and then explore the rotunda. It just depends on the group, on their needs.”

Interested teachers can contact the center to plan a visit to the center or book a trip for their students.

Levy says “I think what makes us unique is that we’re dedicated to helping people discover and enjoy ALL the resources – recreational and cultural and natural. We’re not just dedicated to a specific park or specific culture or a specific activity, we’re dedicated to all of them. For someone travelling through, or a resident, we’re a great destination to get a perspective on the whole Colorado plateau.”

Besides school trips, the CCDC offers youth camps, as well as Signature trips. For 2019 these include an Earth Water Sky River Youth Camp for kids age 12- 15 in June.

The comprehensive perspective is also reflected in the CCDC’s commitment to stewardship and land-based education. “We started a youth corps, the Canyon Country Youth Corps, and many of the participants were Native Americans,” Ross says.

“The youth corps are providing jobs for a lot of Native kids where there are very few jobs, especially in conservation,” explains Ross. “We are encouraging kids to go into public land management, which is hurting for the future. This is a way to train individuals, and to give them an inside look at what that kind of profession would be like.”

Funds to pay the corps members are generated through grants from the U.S. Forest Service, BLM, Walton Foundation and other agencies as well as private donors. In 2012, Osprey Packs gave half of their proceeds from the annual fall locals fundraiser to the CCYC, to help with their conservation projects.

The CCYC was a founding member of both the Dolores River Restoration Project (See the July 2017 Free Press) and the Escalante River Restoration Project. “They work along with other stakeholders to come together to remove an invasive species at the watershed level,” says Ross. “It is a true partnership, with scientists working along with the youth – a cutting-edge way to do land management, while training the kids at the same time.”

To date the youth conservation corps crews have built 2.5 miles of hiking trails in southeastern Utah, 7542 feet of fencing, and have removed invasive species from 246 acres of land along the Dolores and Escalante Rivers. Corps members have worked with the BLM to restore native plants to sensitive ecological zones, by collecting and propagating seeds and plants. Forty-one youths have been trained. “It’s a real boost for the public,” says Ross.

On June 22, the CCDC will have its 35-year anniversary celebration. Entrance to the Discovery Center will be free for all attending. There will be a free picnic lunch, guided trail rides and hikes on the campus, and a wrangler will give a demonstration on how to saddle a horse. It will be the official opening of the Pollinator Path outdoor exhibit.

According to Weinmeister, this new exhibit includes a pollinator garden out front, “so as you walk up to the front, you have the option to walk along a couple of paths with the plants that the pollinators are attracted to. Then as you come into the rotunda, the exhibits will have some of the plants and terrariums.

“We have a brand-new microscope that projects up to the big screen, so you can look at pieces of pollinators. There is also a mural which has a landscape with plants and pollinators hidden in it. If the kids find the pollinators they get a button at the front desk.”

In the future hummingbirds will be added to the Pollinator Path exhibit. Center staff, including a geologist, are in the process of developing the Living Earth Biocrust Experience, another hands-on exhibit with a biocrust garden out front, and terrariums inside. “We want participants to see that this isn’t just dirt, this is a living organism,” says Weinmeister.

Looking into the future, Weinmeister expresses excitement about the new Biocrust exhibit, as well as making space for travelling exhibits inside, such as Fort Lewis College’s mountain lion exhibit.

Meanwhile, Ross, now retired, is happy to have accomplished more than she set out to. “I feel really blessed that I was able to do it and make it work for 32 years,” she says of her role in founding and running the Four Corners School of Outdoor Education and shepherding it into the next phase as the Canyon Country Discovery Center.

The transition from school to discovery center, including a capital campaign to build the new center. was a long process, she says, but “I don’t believe life should always be easy. I think it should be challenging and meaningful. I enjoy doing meaningful things.”

Make your summer a bit more meaningful and take a trip out to the Canyon Country Discovery Center.