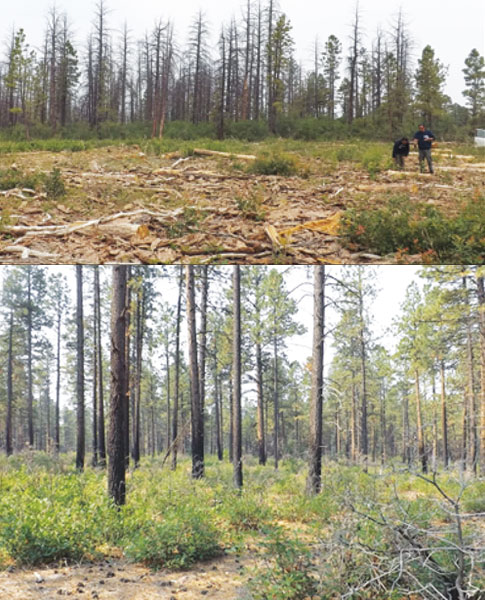 Above, a beetle-killed area of ponderosa pine that has been cleaned up (note, however, that the background has not been cleaned up. Below, a previously thinned area, mostly saved from beetles due to healthier trees. Photos by Dexter Gill.

Now, that is a word that has sparked the emotion of some people for over 50 years now. Most of those that get their knickers all in a twist over the word don’t realize that natural clear-cutting has been happening long before man and settlement of the West ever happened. Some [natural clear-cuts were large and some were medium or small. Some clear-cut wetlands and even stream banks, and yes even our conjured-up sacred wilderness areas and are still happening today.

What? Who is doing this? Well, it is the natural processes that our Creator put into motion long before loggers and environmental activists came along. There is an old truism, saying “only two things are certain, death and taxes.” The trees don’t pay taxes, but they are certain to die, just like you and me. How can nature do this? Let me list some of the key ways: wildfires, landslides, avalanches, windstorms, tornadoes, volcanic eruptions and insects and diseases. There is one big difference between man and nature’s clear-cuts, nature leaves a bigger mess. Man works to remove and utilize the tree crops and has learned how to better clean up most areas behind him. Nature just leaves standing dead, burned, jack straw and buried masses plugging streams.

Two local examples of large natural clear-cutting on the San Juan National Forest are the 416 wildfire and the West Glade bark-beetle infestation. Why has it been acceptable to allow thousands of acres of forest to be devastated “clear-cut” by wildfire and insects, but it is unacceptable to conduct protective works by thinning the over-dense forest, removing dead fuel and developing access routes for those protective/prevention actions? I am baffled by the mentality that says it is bad to harvest and use forest products but it is good to let them burn! What did I miss in studying “Logic and Common Sense 101”?

I’ve heard it said that in the past, foresters put out too many fires too quickly, thus causing the fuel to build up to the level it is today, so the fires now must be let burn to clean up the fuel loads. Well, yes, we did put out the fires to protect a valuable product and watershed that contributed to the local economies. BY harvesting and removing that product, the fuel load was being reduced and making room for a new crop. Over 40 years ago, the federal government decided to no longer remove/harvest much of the “fuel load” for management and economic return, so the fuel load grew and grew and grew, creating an unhealthy forest, so what was the real cause of the fuel loading? Now, looking at the insect problem, we find that it is also connected to the no-harvesting and fuel build-up problem. When harvesting was taking place, it opened up the old dying forest and established a new young forest, which became too thick, kind of like growing radishes, have to thin them. The question became how to thin, by man or let nature? Nature’s “wood butcher” is insects that have no morals and reproduce faster than rabbits. The beetles are indigenous and always here and always killing trees, but usually in small groups. However, when the forest is allowed to become too thick there is insufficient water for so many trees, so they become unable to ward off attacks by the beetles. The beetles are not selective managers, as they attack and kill all the trees they can to create much larger “clear-cuts” of dead standing trees, which contributes to nature’s second tool, wildfire. It kind of reminds you of the old Mongol hordes descending on a village to kill, pillage and burn, neither of them clean up after themselves.

On the West Glade there are three little buggers that have ganged up to form the horde, the mountain pine beetle, the Western pine beetle and the real nasty one, the round-headed pine beetle. Their combined effort has resulted in several thousand acres of “clear-cut” pillaging. Fortunately, the Forest Service is able to follow behind, selling many of the dead trees, letting the wood market do the work and pay for the clean-up. Some is locally made into a special blue-stained wood paneling, and other is marketed as pine firewood. The other option would be to let it stand, deteriorate and later burn, causing further destruction to the watershed, similar to the 416 Fire results, which is what happens in all designated wilderness and roadless areas.

Putting “blame” on the problem doesn’t solve it. It is what it is, now what do we do to correct it? Do we want more natural clear-cuts, leaving it to nature and providing no benefit to man or beast? Man already knows how to manage and use and protect the forest for the benefit of the vegetation, watershed, wildlife, and yes even man! So, get the selfish do-gooders out of the way and protect, use and develop the forests for the future of all. You and I and even our children will not live long enough to see the forests in these two areas restored to what they were just last year. What do we do with the rest of the forest as we look to the future of our grandchildren and the forest health? How about restoring the economic-industry use of the forest “fuels” of wood and forage? What a shocking concept that would be.