The Hisatsinom Chapter of the Colorado Archaeological Society has announced that Robert and Diane McBride have been awarded the prestigious Ivol K. Hagar Award for 2020. 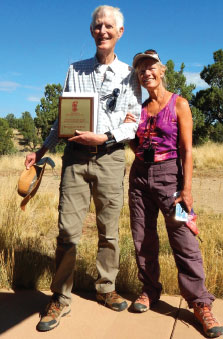 Named after a well-known Colorado avocational archaeologist, this award is given by the Colorado Archaeological Society (CAS) to “those individuals who have made outstanding long-term contributions to the Society either at the state or chapter level. These contributions include notable efforts in outreach, research, publication or some other capacity. “In the past 24 years, (since its inception in 1996), this award has only been received by 12 people in Colorado,” stated Karen Kinnear, CAS executive secretary, in a release.

Bob McBride and his wife, Diane, were nominated by the Hisatsinom Chapter for their roles in creating and implementing the Hisatsinom Archaeological Survey Program. Started in 2008, the program’s purpose is to conduct pedestrian archaeological surveys for private landowners to identify cultural resources on their property, all at no cost. Over the past 12 years, Bob and Diane have led teams of volunteers from the Hisatsinom Chapter of CAS on archaeological surveys of 26 parcels of private property, resulting in the recordation of 339 sites, surveying a total of 5625 acres, mainly in Montezuma County.

During these surveys, surface artifacts (which are not collected) are identified in the field, recorded and used for site identification and description. Recorded sites are then submitted to the Colorado Office of Archaeology and Historic Preservation for entry into the statewide COMPASS database, where the data is available to archaeological professionals. The property owners also receive a printed report of the results.

Bob and Diane work collaboratively. “Bob performs most of the geographic, environment, site, and feature measurements and recording in the field, while Diane serves as the team’s primary pottery expert during artifact recording,” said David Melanson, past survey team member and past president of the Hisatsinom Chapter.

The McBrides have spent hundreds of hours interpreting survey results, completing site forms, and preparing reports. Their efforts have yielded important data about sites on private land, which are most threatened with destruction.

Mark Varien, executive vice president of the Research Institute at Crow Canyon, said, “The McBride-led surveys provide landowners with an understanding of the sites on their property, why the preservation of these sites is so important, and the role private landowners need to play as stewards of the archaeological record.”