When people crowd into the Durango Arts Center for the start of “Always Patsy Cline,” they’re chatting and happy, full of anticipation.

But by the time the show ends, the theater is mostly quiet, the silence punctuated with the sound of sniffling. 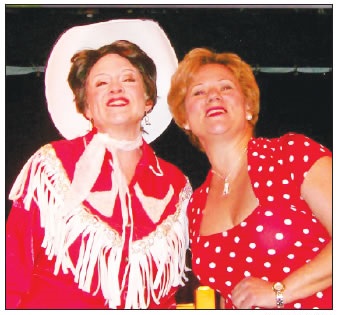 That’s because the story of Patsy Cline doesn’t have a happy ending. The countrymusic star died in a plane crash on March 5, 1963, at the age of 30.

But “Always Patsy Cline,” a true story based on the artist’s life, is anything but gloomy. Through most of the show, the audience is laughing in the aisles.

“Always Patsy Cline,” which is performed on Friday and Saturday nights through Sept. 19 at DAC, is a true story based on the friendship between Patsy (played by Tracy Lyn Thomas) and her fan Louise (played by Mary Ellen Cerroni).

“It’s a great example of how two people who are so different from one another can become such good friends,” said Sheri Rochford Figgs, the executive director at DAC, who loves the show and has seen it twice.

Director Theresa Carson said, “I really enjoyed Cerroni and Thomas — they are both hard-working, dynamic, and sharp women.”

“Always Patsy Cline” has been produced by different theatre companies over the U.S. for the past 10 years. Writer Ted Swindley got the inspiration for the screenplay from the book “Honky Tonk Angel: The Intimate Story of Patsy Cline” by Ellis Nassour. It’s a two-person show, not including the band (led by C. Scott Hagler).

Swindley tells the story through the voice of Louise, who speaks to the audience as if they were sitting in her kitchen having a cup of coffee with her – which would apparently be extremely amusing, because Louise is depicted as very funny.

Carson said that Cerroni’s skillful perforance ensures that Louise is likable to the audience. (Cerroni’s husband says to her all the time, “Mary Ellen, you’re just a little clown!”).

Carson said it was satisfying to direct Cerroni, because she was good at following through and putting the right touch of emotion into the crucial poignant moments in the story.

Louise begins her story with the first time she heard Patsy sing and recounts how she became a fan and followed Patsy’s career closely. The two met at a concert in Houston and Patsy wound up spending the night at her house and Louise cooked her bacon and eggs. Louise gave her a ride to the airport the following morning. This meeting between the two took place six years before the plane crash that ended Patsy’s life.

Over those six years the two kept up a steady stream of correspondence and, through the U.S. mail, developed a great friendship.

Throughout the telling of this story Thomas sings 27 classic Patsy Cline songs, in a voice strikingly like Patsy’s.

Cerroni said she has long been a fan of Patsy’s, and described playing “Heartaches” on her guitar in the ’90s. She also recalls singing “Crazy,” which was written by Willie Nelson, at karaoke nights in her youth. A disc jockey told her that “Crazy” is the song most often sung by female karaoke singers.

Thomas is also a fan. She had a Patsy Cline album that she remembers playing over and over.

“After my mom saw the show she reminded me that I have been singing ‘Crazy’ since I was 12 years old.”

“Crazy” is Patsy’s signature song, but the first time she heard it she hated it. In late 1961 and early 1962 “Crazy” was a hit on three different charts. Loretta Lynn later reported that the night Patsy premiered “Crazy” at the Grand Ole Opry, she received three standing ovations.

Thomas was excited to find out she was going to get to play the star in “Always Patsy Cline.” She thought, “I already know the words to all the songs.”

Terry Swan, the president of the board of directors for the DAC, said he got the idea to present “Always Patsy Cline” at the same time as Carson. Swan was the managing director at the New Stage Theatre in Jackson, Miss., and during his tenure “Always Patsy Cline” ran twice.

He said, “The real Louise Seger who lived in Jackson at the time got to come to the show. She loved it.”

Cerroni thinks Louise must have been a “genuinely, really nice person,” who got to live her dream by having a close friendship with a big-name star that she adored.

“If we all stop to consider it, we could think of the famous person we would like to cook bacon and eggs for in our very own kitchen,” Cerroni said. “Mine was Karen Carpenter. I thought she hung the moon!”

Carson wanted badly to produce “Always Patsy Cline,” knowing she had Thomas and her amazing voice to play Patsy. “What really drew me to the script was the story,” she said. “I love a script with a good story.” Carson was having a hard time finding a place to produce the show and it was Thomas who got Carson and Swan together, and the rest, as they say, is history.

For people who like musicals, the DAC is also showing “A Grand Night for Singing” on Tuesday, Wednesday, and Thursday nights. The musical features all young adults who “have come up through the ranks at DAC,” according to Thomas, who is producing this show.

DAC is in partnership with the 9-R school system, and runs after-school programs once a week in each of the seven schools in and around the Durango area.

DAC runs a docent program that sends mostly retired teachers into the classrooms and senior centers during the day to talk about famous artists.

“My favorite program offered by DAC is GOAL,” said Swan, “and it’s because I truly believe this program has the ability to change the life of a young girl.” GOAL (Girls’ Opportunity through Arts and Leadership) is for middle-school girls and is a two-week, intensive art program.

DAC is still affiliated with the Durango Performing Arts Company even though they have launched themselves as their own non-profit.

Prior to the performance of “Always Patsy Cline”, Swan talks to the audience about the DAC’s financial struggles, and urges everyone to become members. He would like to see membership go from its current 600 to 1,000 by the end of the year.

But make no mistake, DAC is not a sinking ship. While last year they were in the red, this year not only have they paid the debt back, but they are functioning under a balanced budget. “The Patsy show is a great example of how strong DAC is again becoming,” Thomas said.

“Always Patsy Cline” involves a lot of audience participation. Twice during the show Cerroni comes off the stage and finds a gentleman to dance with.

So if you want to be the one she dances with, pull on yer best cowboy boots, make sure yer belt buckle shines all the way across the room, and git down to the Durango Art Center and see “Always Patsy Cline.” And if you own not a single cowboy accoutrement, go see the show anyway, because Louise doesn’t always pick cowboys to dance with.