Denver author Peter Heller is a master storyteller, and that talent is on full display in The River, his third novel since bursting onto the world literary scene in 2012 with his New York Times-bestselling debut, The Dog Stars. 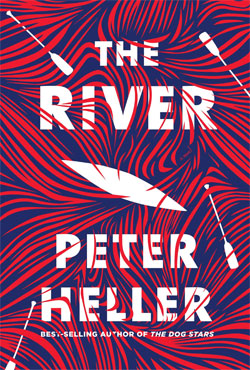 Jack and Wynn have been best buddies since their first meeting during freshman orientation at Dartmouth. Wynn is a Vermont farm boy, hulking but sensitive, as likely lost in a book as in the hardwood forests of his native New England. Jack is a Colorado ranch kid to whom, in Wynn’s telling, “sleeping under the stars, cooking on a fire, were as natural as breathing.” Both love the outdoors – flyfishing, camping, and especially whitewater – and it’s in pursuit of these passions that we first encounter the boys on a late August canoe trip down the Maskwa River in northern Canada.

Unfortunately for Jack and Wynn, things go awry from the novel’s opening sentence when smoke from an approaching wildfire reaches their remote riverside camp, turning what was to have been a leisurely summer idyll into an urgent race against death. After overhearing an argument in the fog, they soon encounter another canoeist, distraught and disoriented, who reports that his wife has gone missing. When the boys backtrack and find the woman beaten and nearly comatose, they realize that the fire behind them may pose less of a threat to their survival than the woman’s armed and dangerous husband now waiting somewhere up ahead.

Heller, it must be said, knows the lay of this land. An avid outdoorsman and adventure writer, he’s been a contributing editor at Outside magazine, Men’s Journal, and National Geographic Adventure, and the book-length nonfiction he wrote before becoming a novelist covers such subjects as surfing (Kook: What Surfing Taught Me About Love, Life, and Catching the Perfect Wave), whitewater kayaking (Hell or High Water: Surviving Tibet’s Tsangpo River) and wildlife conservation (The Whale Warriors: The Battle at the Bottom of the World to Save the Planet’s Largest Mammals.) This background, combined with his MFA from the prestigious Iowa Writers’ Workshop in both poetry and fiction, uniquely equips him to blend authentic technical detail with achingly beautiful prose. Consider:

“Wynn looked downstream at the course of sky curving away between walls of living woods. Soon the channel of firmament would pulse with a star, then three, then a hundred, and it would keep filling and deepening until the stars sifted and flowed between the tops of the trees in their own river, whose coves and bends would mirror the one they were on. He had thought it before, and he loved thinking about the two rivers. The river of stars would find its way to its own bay and its own ocean of constellations and Wynn imagined, as he had before, that the water and the stars might sing to each other in a key inaudible, usually, to the human ear.”

The River, then, is a cat-and-mouse thriller artfully rendered and deeply understood – a delicious confection of pulse-pounding suspense, gorgeous writing, and keen introspection about nature, both wild and human. Comparisons to James Dickey’s Deliverance may be inevitable, and perhaps even justified, but The River ($25.95, from Knopf) stands on its own as a future classic of wilderness fiction and anoints Heller a worthy successor to Jim Harrison and Norman MacLean as poets laureate of the great American outdoors. And if the ending doesn’t leave you in in a puddle, my friends, then I suspect nothing will.

SAVE THE DATE: On Friday, March 22, at 6 p.m., please join me in conversation with the inimitable Vince Lee at the Cortez Public Library to discuss Vince’s gripping memoir Old School, which recounts his exploits as a climbing instructor, mountaineer, and wilderness explorer in the halcyon days of outdoor adventure. Not an evening to miss!

Chuck Greaves’ sixth novel, Church of the Graveyard Saints, will be in bookstores September, 2019. You can visit him at www.chuckgreaves.com.