Dark Skies: Are they worth preserving?

“If stars should appear one night in a thousand years, how would men believe and adore. . . But every night come out these envoys of beauty, and light the universe with their admonishing smile.”

Driving into a big city at night is like driving into a sunrise. The glow can be seen for miles, growing brighter and brighter until it is all-encompassing and the dark is eradicated.

In the Four Corners, the night sky – with all the wonders that Emerson praised – is still visible, most of its stunning features intact. But how long will that last? Should dark night skies be preserved? And if so, how? 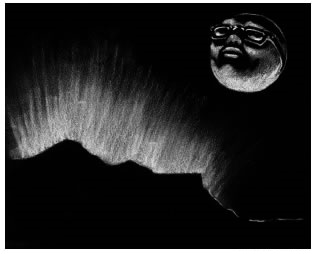 The issue of dark skies – once something that only astronomers cared about – is gaining attention worldwide. National Geographic featured it on its cover in November 2008. Cities scattered around the globe are adopting regulations to preserve some natural darkness.

And, locally, “dark skies” popped up as an attribute worth preserving about Montezuma County at every one of the county’s four recent workshops on comprehensive planning.

Greg Kemp, a member of Montezuma Vision Project, a grassroots group that advocates more land-use planning, said he, Southwest Colorado Greens chair Jim Skvorc, and others recently approached the planning commission about implementing lighting regulations, but the board felt the issue was too complex to tackle at this time.

Kemp said MVP is not pushing for stricter regulation of lighting, but believes it is a topic of interest and wants to provide citizens with information so they can decide whether to support it.

Kemp himself would like to see dark skies preserved. “In my opinion it’s really a pretty simple thing to do,” he said. “If people feel they need security lighting, there is a wide array of fixtures available that don’t cast a wide glare and also tend to be more energyefficient. The light output is lower, but it’s adequate.

“I think it’s something people should consider in any new houses or any housing upgrades. It’s very easy to do and it can be done without compromising security in any way whatsoever.”

The push for dark-sky preservation was initially motivated largely by people’s desire to continue beholding the beauties of stars, nebulae, and planets. For years astronomers have decried the growing sky haze that has obscured their observations. In 1958, the city of Flagstaff, Ariz., adopted an ordinance to reduce advertising lights in order to help keep nearby Lowell Observatory viable. In 2001, Flagstaff was named the first International Dark-Sky City by the nonprofit International Dark-Sky Association (IDA); Flagstaff has its own chapter of the IDA and a campaign called “Stars Up/Lights Down.”

But more recently, the call for lessintrusive lighting and more natural skies has been bolstered by biologists’ reports that artificial lighting may be harmful to the health of wild animals and humans alike.

Insects, birds and bats are often powerfully drawn to light; artificial sources may hamper their normal navigation, migration, feeding, and reproduction. For instance, endangered sea turtles nest on dark beaches and their hatchlings instinctively move toward the relatively light ocean when they emerge from their shells. Nowadays, the baby turtles often head inland instead toward artificially shining cities – and die.

Round-the-clock lighting is even believed to depress the formation of chlorophyll in leaves and increase algae growth in ponds, according to the IDA (www.darksky.org).

Today, two-thirds of the people in the United States and half of those in European cannot see the Milky Way where they live, according to a 2001 report by the Royal Astronomical Society. As we turn night into day through bright lights and intrusive noises, people find themselves out of synch with their natural biorhythms and may have difficulty sleeping and staying healthy.

Different researchers have found indications that artificial light at night reduces people’s production of melatonin, a hormone critical for many functions including a properly working immune system. The Journal of the National Cancer Institute in England reported that night-shift workers are 60 percent more likely to develop breast cancer.

The AMA argued that light pollution is a waste of energy, a source of carbon dioxide that may contribute to global warming, and a safety hazard for older people whose visibility is affected by glare at night. Also, the AMA said, “Light trespass has been implicated in disruption of the human and animal circadian rhythm, and strongly suspected as an etiology of suppressed melatonin production, depressed immune systems, and increase in cancer rates such as breast cancers.”

It also “disrupts nocturnal animal activity” and may diminish the populations of many animals, the AMA said.

The irony is that, in many cases, retaining dark skies is possible without losing visibility and security. Simple technologies such as lights activated by motion sensors and lights that shine downward rather than in a glowing globe can greatly reduce light pollution.

Empire Electric Association, a rural electric co-op that serves Southwest Colorado and San Juan County in Utah, has implemented a dark-sky initiative for street lights. Whenever a fixture needs repairing or even when a bulb must be replaced, Empire workers replace the entire old “cobra-head” fixture with cutoff-lens street lighting, said Doug Sparks, member-services manager for Empire.

“The light is cut off at a prescribed angle,” Sparks said. “You could take a pencil and draw a line around the light, as opposed to a dispersed light.

“That’s what it’s all about, not allowing the light to go up, only to come down.”

Empire has adopted the policy throughout its system and in its franchise agreement with the city of Cortez, he said. The goal is to have all the lights replaced within the next few years.

“The trend is toward more dark sky,” Sparks said. “The technology is coming along.” The next wave of change will probably be the implementation of LED lights, which are much more energy- efficient than the old fixtures, he said, but they remain too expensive for Empire to utilize now.

Sparks said the cutoff lighting does not shine straight down, but at an angle of 35 or 40 degrees from horizontal. It does result in a minute loss in lighting on the street, he said.

“We bought several different styles and let the city [of Cortez] decide what they could live with,” he said. “You now have a distinct dark line you step into.” But the lights are designed so the lighted areas overlap “So far there haven’t been any complaints and no safety issues at the intersections.”

The adoption of more dark-skyfriendly street lighting seems like a nobrainer, but Sparks said there have been people who objected to it in other places. “Historical societies don’t want modern lighting,” particularly in historically-oriented towns, he said. “They want the big old lamp posts that were designed for gas-powered light. When you make the lights more subdued and more efficient, they have a very modern look.”

Still, Empire is committed to replacing its street lights to decrease light pollution. “It was a corporate decision about five years ago to lean in that direction,” Sparks said.

An issue to be dealt with

MVP’s Kemp said he would like to see Montezuma County and its municipalities adopt regulations requiring dark-sky-friendly residential and security lighting in addition to street lighting, but he knows there may be obstacles. For instance, he said he’s been told that it’s very difficult to objectively measure light output because of reflected light from vehicles, wet pavement, snow and other factors.

But he believes the issue is worth pursuing. “People around here tend to take the night sky for granted, but when you talk to people from metropolitan areas, they are just in awe at what we have.”

Montezuma County has received only two complaints specifically about lighting this year, according to Planning Director Susan Carver.

Jon Callender, chair of the Montezuma County planning commission, said lighting comes up whenever the group mulls applications for commercial or industrial activities. “Lighting is one of the things we often talk about, particularly when the facility is going to be in a site that was not commercial or not developed that much previously, because the neighbors are used to a much darker environment.

“If you build a storage unit in the middle of a black space, every single neighbor is going to be concerned. But I don’t know how you stop it. Can you even regulate it, and do you want to?”

Still, aesthetics in general are a topic that will have to be dealt with, Callender believes. “One of the things identified in the original county comprehensive plan was the issue of visual blight, and we never really dealt with that, whether lighting or junk or poorly kept-up properties,” he said. “But it’s a difficult issue and one this county is sensitive to because we don’t want to interfere with people’s private property rights.”

In the past few months, Callender has led four meetings around the county to gather input on whether the comprehensive plan should be revised. With the exception of the meeting in Mancos, the workshops were lightly attended. However, “dark skies” were mentioned at every meeting as something worth preserving in the county.

“My take is, it’s an issue we have to deal with, but not the top issue,” Callender said.

“This is a gross oversimplification, but basically there are two kinds of people in the county. One is people who see light as an indication of growth and positive economic development. The other is those who see it as an intrusion into what would be a much more bucolic and rural environment.

“The latter see light as a measure of ever-increasing population and development pressure. There is a strong and articulate group who believe this is one of the markers for many things they are concerned about.”

Callender noted that new technology is making it much easier for people to have both dark skies and well-lighted areas on the ground. “I think what we’re going to move toward is, first, public discussion of these things at a higher level than we have in the past, and second, some sort of plan by which we stimulate people to adopt those types of technologies, whether we regulate it or not,” he said. “Fairness and self-regulation can often be a very effective way to reduce and mitigate these kinds of problems. This county is not inclined to over-regulate things.”

But he does not want to see the county go overboard in adopting rules to limit people’s lighting options, warning that they could have unintended consequences. It would be better if people simply chose to use lighting that serves their purposes but preserves dark skies.

“Maybe it’s better for us to all work together because we believe it would be beautiful to have dark skies around here,” he said. “We can think about that any time we screw in a light bulb. I think that would be excellent.”