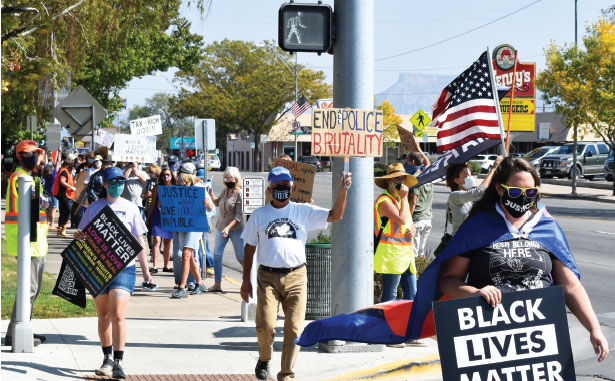 Participants in the peace march walk on Cortez’s Main Street on Oct. 3. Photo by Gail Binkly.

One week after onlookers confronted and harassed social-justice marchers in Cortez, the next Saturday demonstration drew more marchers than usual and experienced fewer negative comments.

On Sept. 26, bystanders had shouted obscenities and threatening language at the walk’s participants, according to reporting by Emily Hayes in The Journal as well as videos posted on social media.

In one video, several men are seen shouting across Main Street at the marchers. Among their comments are:

On Oct. 3, the peace march’s organizers changed its time, as they have done before, to avoid such confrontations. Nearly 90 people showed up to carry signs and walk along Main, sometimes stopping and waving at drivers. The event lasted about an hour.

It took place without serious incidents but not without any hostility. The protesters drew a number of honks of support from motorists, but also were “coal-rolled” by at least two trucks. A woman turning onto Main from a side street said, “Kill them all” as she drove by.

One pedestrian on Main, who would not give his name, cursed and complained vociferously about the demonstration. “You’re a fucking disgrace to Cortez,” he said. He announced to anyone who passed that he was born in Los Angeles and had been assaulted by a black man when he was 14 and that there are places in L.A. where white people can’t go in safety.

“The Cortez Police Department is not like L.A. or Chicago,” he said.

The marchers, who have been instructed to remain silent, did so as they passed him.

The marches began out of outrage and concern over the death of George Floyd on May 25 in Minneapolis. Floyd, a black man, was killed by a white police officer who knelt on his neck for more than 8 minutes, ignoring Floyd’s pleas that he couldn’t breathe – even though bystanders were video-recording the event and yelling at the police to let Floyd up.

After the S a t u r d a y marches began, Tiffany Ghere of J Fargo’s Restaurant in Cortez organized a motorized demonstration to support police and first responders. They began roaring up and down Main at the same time the marchers were walking, leading the peace protesters to switch the time of their event to afternoons.

On Oct. 3, the motorized demonstration drew a goodly mass of trucks, cars, and motorcycles bearing American and pro-Trump flags as well as a few Confederate flags.

The motorized demonstrators have said they have also been met with hostility, being called white supremacists and racists. And on Sept. 5, a man who had walked with the peace and justice marchers at least once leaped at a motorcyclist driving along Main as part of the patriotism parade. He was taken into custody.

“My No. 1 message is to express deep sorrow about the gentleman who stepped into Main Street,” said Dawn Robertson, an AmeriCorps volunteer who is organizing the peace marches, at a city-council workshop on Sept. 8. “I have no tolerance for that. As far as I know, that man walked with us once. He did not walk with us on Saturday. He did his walking onto Main Street after we got off of Main Street. As far as I’m concerned, this person is not welcome to walk with us.”

However, the demonstrations in support of patriotism, Trump and the Confederacy seem to have experienced no incidents comparable to the confrontations that faced the peace and justice marchers on Sept. 26.

According to The Journal, people yelled “Go home” at Robertson that day, and told her, “If you come back, you will be in trouble.” They demanded to know whether a woman draped in a rainbow flag was gay.

And earlier, one Saturday in August, a Cortez man had a window smashed in on his vehicle while it was parked on North Street while he was marching. He had seen a driver who supports the patriotism display scoping out his vehicle when he parked it.

The demonstrations have raised a number of concerns in the city. The noise of the patriotism demonstration drew complaints from the farmers’ market, which was trying to offer live music. Drivers have been angry if they had to wait for the marchers to cross the street.

At its workshop and regular meeting on Sept. 8, the council heard lengthy comments from people on both sides.

Robertson said, “Racism exists, and when we walk, dozens and dozens give us the thumbs-up and honk in support.”

She expressed deep sorrow and concern for any negativity the patriotism riders may face.

She also said, “There is no part of me that is against the police force.”

Sherry Simmons of Lewis, Colo., one of the founders of the patriotism rides, said, “We follow traffic rules. We love the country. We are showing our patriotism. We miss the America we all grew up with.”

She said the deep divisions in Cortez started “about the same time as the protests did,” but that “it isn’t coming from us, we are not white supremacists.”

Fred Blackburn of Cortez, commenting via Zoom, said in his 40 years in the city he has “never seen anything like what is going on now.“

He thanked the sheriff ’s office and police department for helping to keep things low-key but said he worries about the fringe elements in the different groups.

“We are putting the sheriff ’s office and police department in a very tough situation. What is going to happen as we approach the election?” he said.

In response to the incidents Sept. 26, the Cortez City Council issued a statement saying they respect citizens’ First Amendment rights but are asking them to be respectful of others’ rights.

“Cortez City Council relishes our citizens taking the opportunity to use their First Amendment rights and share their beliefs with the community,” they wrote. “City Council asks that it is done so in a civil and lawful way, while respecting the businesses and residences that are in the area.”